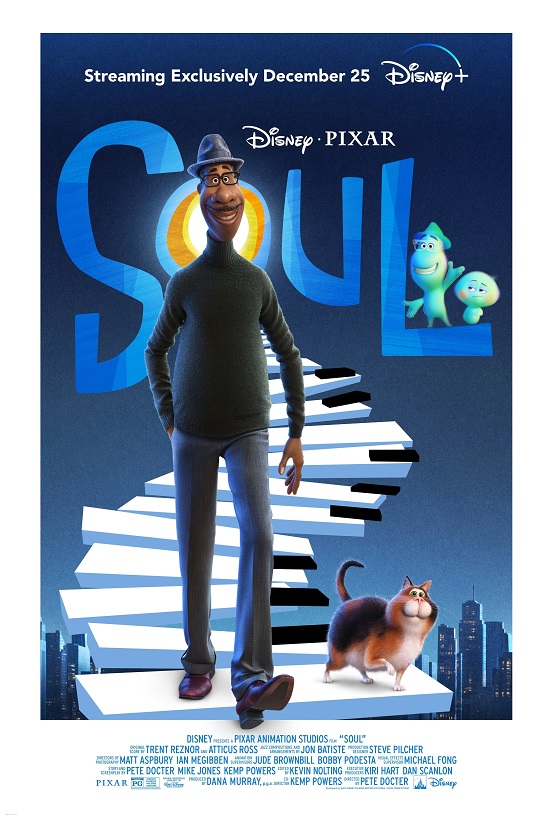 Much like the music that inspired it, Pixar’s latest film Soul is more about feeling than experiencing. It’s an entertaining and in-depth examination of the human condition and what life is really about. The studio is known for its stories being a cut above, taking you places you could never imagine and making you feel things you never thought you could. Whether it’s as simple as what our toys do when we are not around to how our emotions work, the studio isn’t afraid to make us ponder everything we know, and with Soul, they take it to the next level.

The movie is about Joe, a struggling jazz musician who finally gets his big break. Like so many of us, his dreams are so much bigger than what he is now. He finally gets his chance to shine, but it never happens. After this massive opportunity comes his way, he falls down a manhole, and his soul is sent to “The Great Beyond.” Not quite ready to die, he sneaks off and ends up in “The Great Before,” where soul counselors help prepare unborn souls for life.

Mistaken for a counselor, Joe is assigned to mentor 22, a cynical soul who sees no need or reason to be born. Together, they must both learn the true meaning of life and what it means to be alive.

That is the movie’s basic premise, which is so much deeper than I can explain here. There are so many peaks and valleys that it traverses, and I don’t want to give any of it away. It’s a beautiful tapestry of existential drama, comedy, music, and so much more, and it deserves to be seen.

Written by director Pete Doctor along with Mike Jones and Kemp Powers, it feels like a spiritual sequel to Doctors’ own Inside/Out. While that film followed a teenage girl and her emotions, this one is about a middle-aged man and his emotions. More than that, it’s about what happens when you let your emotions take you over and affect the very essence of who you are. In this case, it’s the thrill of chasing your dreams and trying to accomplish something more while letting life pass you by. It’s a very real and all too common scenario and one that is portrayed viscerally and uniquely.

The animation in Soul is top-notch. Each Pixar film looks better than the last, and this is no different. The city of New York looks photorealistic, and everything about it feels real. The simplicity of “The Great Beyond” and “The Great Before” is part of this movie’s charm. There are so many details in both animation styles that it’s hard to catch them all upon first viewing. It’s all amazing to look at.

Now, let’s talk about Jazz! This movie has an abundance of it, and it’s beautiful. I’m not a professional musician, but I understand what it’s like to get lost in art. While it features prominently in the film, it’s a metaphor for any type of art and the best one to use. Jazz musicians are well known for their improvisation and free form style, almost as if something outer-worldly is controlling them. It captures that feeling by taking you to another realm, the very place we get lost in while being inspired. It’s an almost meditative state, and I enjoyed my time being in that place with these characters.

On top of the jazz, there is the wonderful score by Trent Reznor and Atticus Ross. It feels like an odd combination, but the different types of music powerfully complement each other. The music helps the story move along, and it makes this often bizarre journey seem more palatable and helps the emotion really pop.

The voice cast is another odd pairing, but again, it works so well. Jamie Foxx voices Joe and gives one of his best performances. Tina Fey, as 22, is the exact opposite of Joe. While Joe is more subdued and hopeful, 22 is more bubbly but cynical. They compliment each other so well that it’s hard to imagine anyone else voicing them.

There are plenty of people out there who scoff at the idea of watching an animated film because they are for children or whatnot. If you are one of those people, I highly implore you to give Soul a chance. It transcends what an animated film could be and does its own thing. Sure, there are the cute Disney moments throughout, but that’s what makes it work. That’s what makes any Pixar movie stand out from the rest, their blend of creativity and curiosity. They know their audience and never talk down to them. Definitely watch Soul, which is now streaming on Disney+.