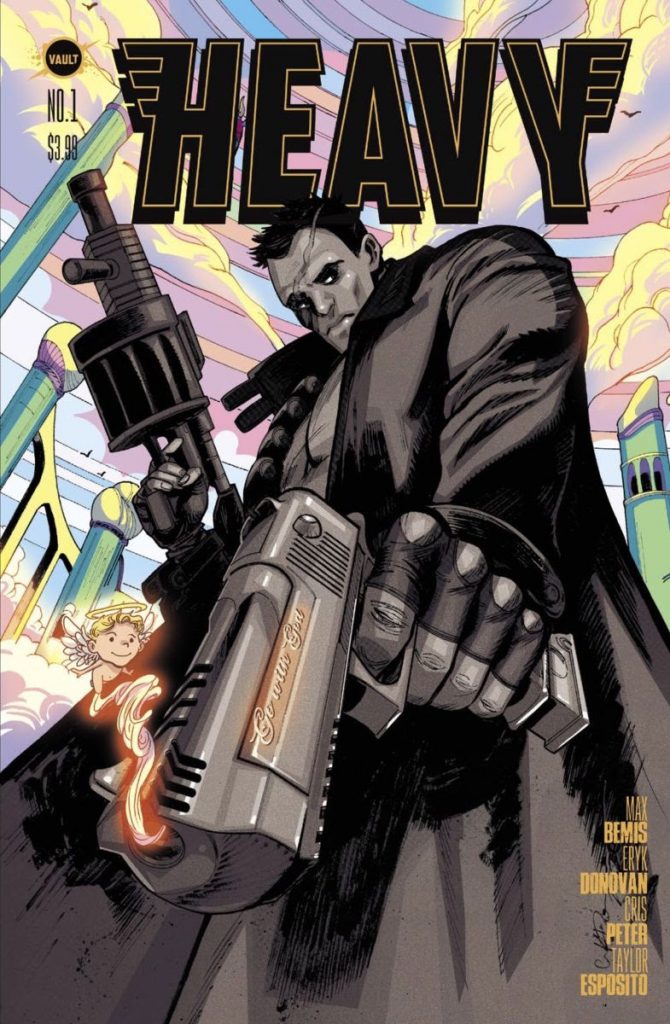 While Heavy certainly lives up to its title, it has a deceptively simple story at its core. That’s not to say that it’s anything less than stellar; it just works better as an idea than a flowing narrative. It struck me as an analogy of anxiety and the regret and fear that it causes. It’s about morality and what it means to love. All of it embodied in a world of uncertainty and the branches of possibilities that exist in our minds.

One of my favorite bands of all time is Say Anything. I love them so much because its lead singer Max Bemis writes such deep and thought-provoking lyrics. Their songs are about his personal struggles with mental health issues such as anxiety, stress, and him dealing with being bi-polar. The songs are also about finding love, losing love, and finding yourself in a world that often feels unaccepting. The thing is, I can relate to all of these things because the message hits home, and I can feel it deep within my soul.

It’s the same with this story. Even though the main character is a badass heavy in a world that I have never seen before, it’s the writing and themes that really shine through. You see, the story is about Bill, who is stuck in The Big Wait. It’s a place between heaven and hell, where those who aren’t cut out for either are sent. In this never-ending place, everyone is given a job to do to work off their debt to make it to their final destination. Bill is a heavy, basically karma, whose job is to give people what is coming for them in the massive multiverse. Things are so close to working out in his favor, he is about to be reunited with the love of his life, but things get complicated. He finds himself partnered up with someone from his past, someone he considers the worst person of all time. It’s going to be a long time being stuck with him in The Big Wait.

Written by Max Bemis, this book is exactly what I wanted. Much like Say Anything, where he buries his turmoil within the bright and happy music surrounding it, he does the same here. The world is bright and colorful, but buried deep within it is the sadness and longing that Bill is suffering from. He doesn’t wear it on his sleeves, but he reveals it in the story’s more intimate moments. It’s all very existential and makes you think, and I can’t help but hear Bemis’s voice coming through the character. As you get older, you start to question your reality, and this is the outlet Bemis chose to use to get those questions out there, but also with a lot of action and big guns.

The book is also a beautiful visualization of anxiety and what it feels like. The problem with anxiety is that there are a million different possibilities for one decision. There are branches that stem and make it impossible to do one simple task. With its branching multiverse ideas and the world of The Big Wait being a never-ending pool of possibilities, it feels like my mind at any given moment. I’m honestly not even sure if that makes sense to anybody else, but it does to me, and that is what I got from this beautiful and brutal world.

The artwork by Eryk Donovan (who is also co-creator of the series) and Cris Peter fits the story perfectly. They ground the story in a reality, and seamlessly take us to different environments within this world. It’s very colorful, but also very dark and noir-ish at the same time. It’s the ideal style for the story being told, and it all meshes so well.

Heavy #1 is an excellent start to this Vault Comics series. It’s pulpy with an existential edge. As mentioned earlier, I felt and related to the themes more so than the story itself, but I still enjoyed the story a great deal. The first issue ends on a very interesting cliff hanger, and I can’t wait to see what happens next.