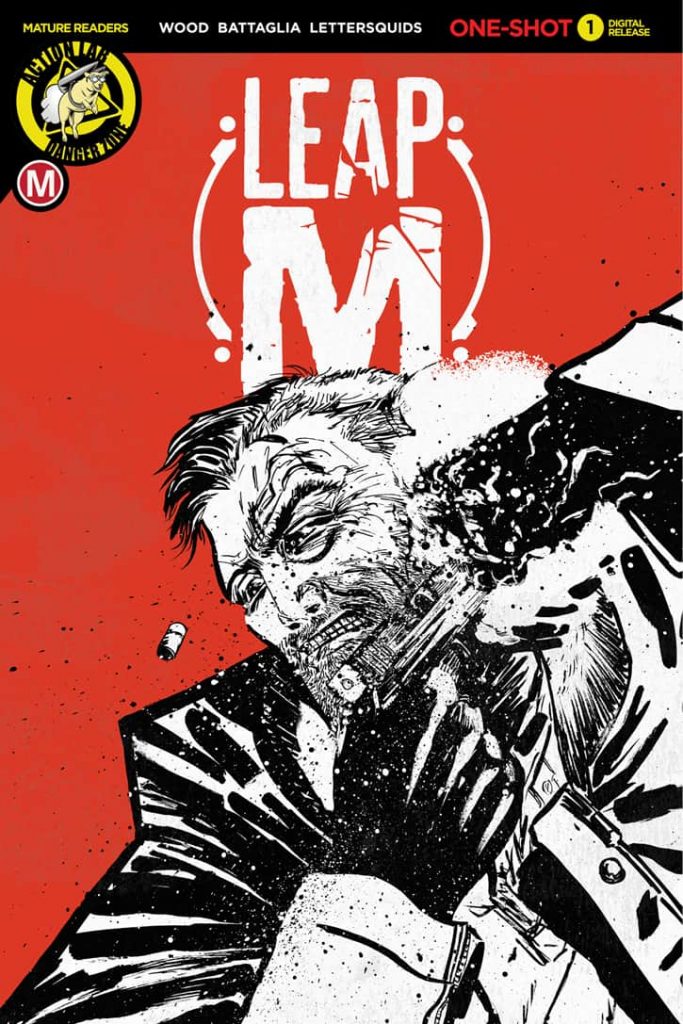 The month of November is here, but there is a book that came out in August that I still can’t shake. The book in question is LEAP M; this title is a one-shot released through Action Lab-Danger Zone. It has taken me a while to wrap my mind around this title, but I’m ready to share a skewed view on LEAP M.

In this world, the prison system is overcrowded, and the government has a solution; that solution is the leap machine. This machine will take the convicted criminal, who just got convicted for 30 years and age them in a matter of moments. The world will stay the same, but their body will age 30 years, and they will be sent to live the life they have left. In this issue, we follow the sentence aftermath of a young veteran that has been dishonorably discharged and framed for murder. He is convicted, sentenced to “leap,” and released to an unchanged world, but a changed body. The story unfolds as noir-style revenge that definitely has “Sin City” lining its DNA, and that is a plus to any reader, but that doesn’t save this title for me.

LEAP M hits the reader with an avalanche of story, but the chaos is not controlled and makes the reader to want more in a negative way. This title is considered a one-shot, and the revenge story gives you an ending, but you are left wanting more of how this world grew into a justice system that turns the criminal world into human lab rats. The creative minds behind LEAP M set their sights on making a title, and they reached that goal. Doug Wood created a world and saw it come to life through the art of Matt Battaglia, but maybe the one issue aspect is the problem for me.

In the world of reviews, I will be the first to say that my critical eyes should not be taken as gospel. LEAP M could be the perfect one-shot title for the random comic book reader, but I want some holes filled and the evolution of this world. I would give LEAP M a higher score; if this was going to be a continuing series, but as a one-shot, I can only give it 2 out of 5.

Joshua Gilmore is the creator and co-host of the Nowhere California podcast. This production made its debut in 2011 and developed a unique take on the pop culture landscape. Nowhere California has evolved into a website (www.nowherecalifornia.com) and a Ghostbusters focused podcast known as “The Ecto Pod.” You can find Joshua on Twitter @ThatNowhereJosh