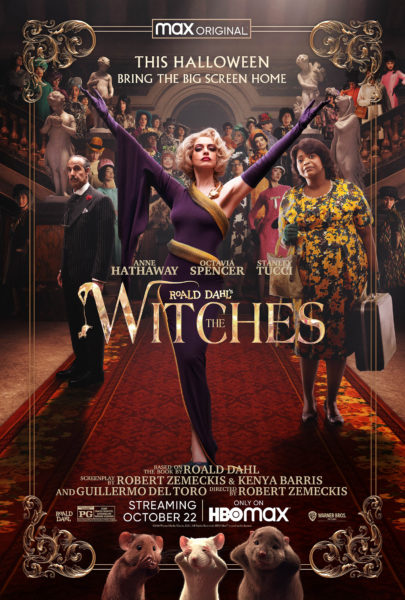 Initially intended for theaters, the new film version of Roald Dahl’s The Witches has hit HBO Max. The movie stars Octavia Spencer, Anne Hathaway, Stanley Tucci, and a cast of talented young actors. It is also directed by Robert Zemeckis, which gave me a glimmer of hope that this adaptation of the Roald Dahl book would be worth the watch. And while the movie isn’t a complete train wreck, it doesn’t quite capture the magic of the cult classic 90’s film or the original story it’s based on.

For those who don’t know the story, here is a quick recap. The story revolves around a young boy who goes to live with his grandmother after his parents are killed in a car crash. His grandma has a penchant for telling magical stories, but one of his favorites is the one about real-life witches. They are horrific creatures who are out to devour children. After an encounter with an actual witch, his grandma decides to get him out of town to a nice hotel to spend a few days. Coincidently, that very hotel happens to be the spot where the Grand High Witch is holding her gathering of witches to reveal her master plan to kill more children.

There have been some changes to the source material, particularly the setting. The original story takes place in the United Kingdom and Norway, while this version takes place in Alabama during the ’60s. It’s an interesting change and one that works for the story being told. It’s never overtly present, but the underlying themes of class and race that are prominent in Dahl’s work come to life using this setting, especially by focusing on a black family this time around. I understand that Dahl is a problematic and controversial figure in today’s world, but he did have a lot to say about how the world really worked.

The biggest problem I have with the movie is its over-reliance on CGI. There is a scene that is so iconic from the 90’s film that it’s hard not to compare to this. During the meeting of the witches, the Grand High Witch reveals her true face to the crowd. Even today, I remember that scene; it’s embedded in my brain; the way she looked, the tangible realism of it all, the beautiful work done by the Jim Henson company. It was terrifying and had a real effect on me. In this new version, there is none of that. After a while, it started to feel like I was watching a cartoon, and not in a good way. Zemeckis brought us the greatest live-action/animated film ever made, Who Framed Roger Rabbit, and he couldn’t even bring that kind of energy and magic to this.

This movie isn’t a complete waste of time, but it could have been so much better. The talented and wonderful cast makes it worth the watch, but that’s about it. It falls flat pretty quick. It’s another negative mark in an otherwise illustrious filmmaking career. If you already have HBO Max, it might be worth a watch, but it’s no reason to subscribe.