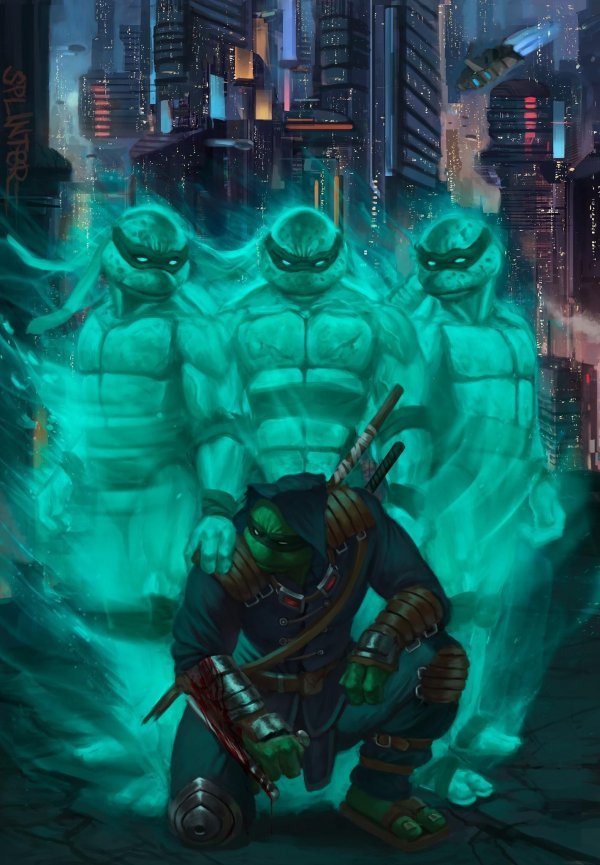 It is easily the biggest book to hit in months. It’s one of the most anticipated titles, and the time has finally come. IDW brings the world TMNT: The Last Ronin, a book that focuses on the last surviving turtle in the far-flung future.

Kevin Eastman and Peter Laird are joined by Tom Waltz, Esau Escorza, and Isaac Escorza to bring this grim storyline to life. The future is very different, and one lone turtle is on a mission to end the threat of the grandson of the turtles’ greatest villain, The Shredder: Oroku Hiroto. But the spirits of his brothers live on and interact with him. But who is the last ronin?

This story could have only worked in the comic book format. Yes, we find out which turtle is left, but we see comments from the spirits throughout the book. If this were a cartoon or film, these comments wouldn’t work as we would know their voices. No, this is a story tailor-made for the comic book art form, and that is amazing in itself. This suicide run mission by the last ronin is exhilarating and keeps you on the edge of your seat, all the way to the very last page. We see hints at the turtles’ lore throughout the book, which adds to this epic’s overall awesomeness.

I absolutely loved this issue. I have been a fan of the turtles since I was a kid, and to see such a fantastic story being produced in 2020 about my childhood heroes, it’s a tremendous feeling. The Last Ronin is a dark, twisting path for the last of the legendary heroes in a half shell, and it’s one I am all in for. One of the best releases of 2020, hands down.