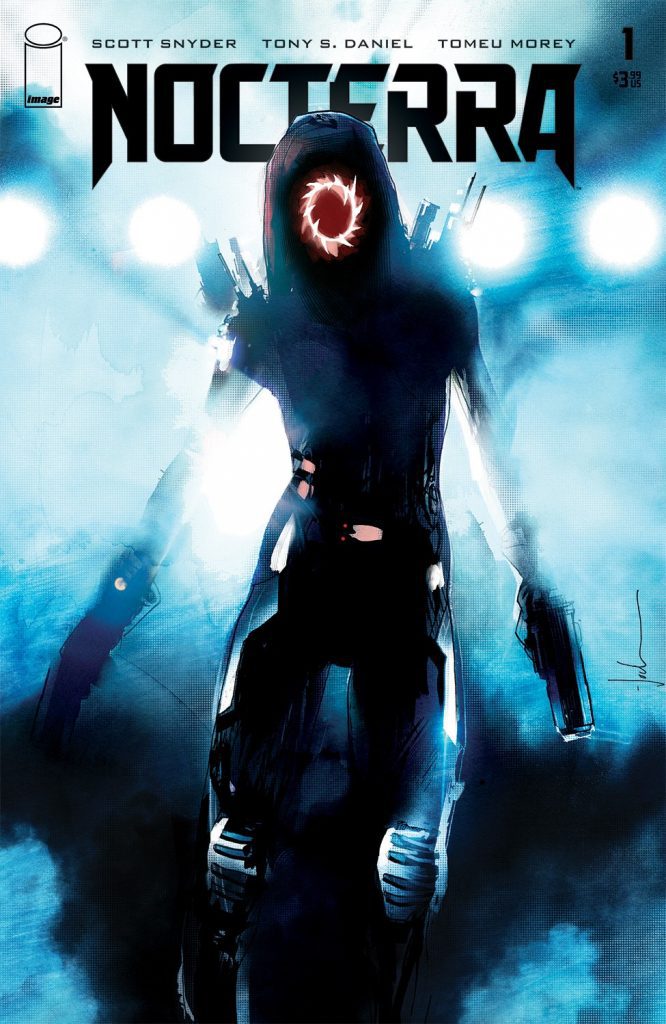 Where were you the day the sun ran out of batteries? And what did you do after? That’s what happens in the breakout series Nocterra #1 from Image Comics.

From Scott Snyder and Tony S. Daniel, this book has a lot of buzz behind it, and rightfully so. Val couldn’t see when she was younger but had surgery so she could see the world. She remembers the day when she and her brother Emory saw the sun go out. The day when everything changed.

Without exposure to light, humans start changing into something horrific. The world is ravaged and sent into a post-apocalyptic-like scenario, with safe zones set out across the lands with lights blaring. Val is grown up now and a transporter, taking loads of people from land to land safely, and for a price. Her brother is a genius tinkerer, and the voice in Val’s earpiece as she goes from job to job. Her brother is fighting the darkness disease as well, as they hope to find the right resources needed to cure him. A massive payday opportunity presents itself from an older man and a girl, but these two are more than what they seem. Add in a mysterious man in black at the end, and we have an adventure that leaves you wondering who’s right and who’s wrong.

This book packs a wallop. The story is fantastic, as we care what happens to Val and Emory and wonder what happened to their parents. What made the sun go out, and why? And who is this man at the end? What powers does he have? I love the design work here, especially for the man in black. He has a very absence of life vibe to him and leaps off the page.

Snyder and Daniel have crafted an excellent start to this new series. Nocterra traverses the darkness and provides light in the form of a fantastic story. Pick this one up; I think Image Comics has another hit series in the making.