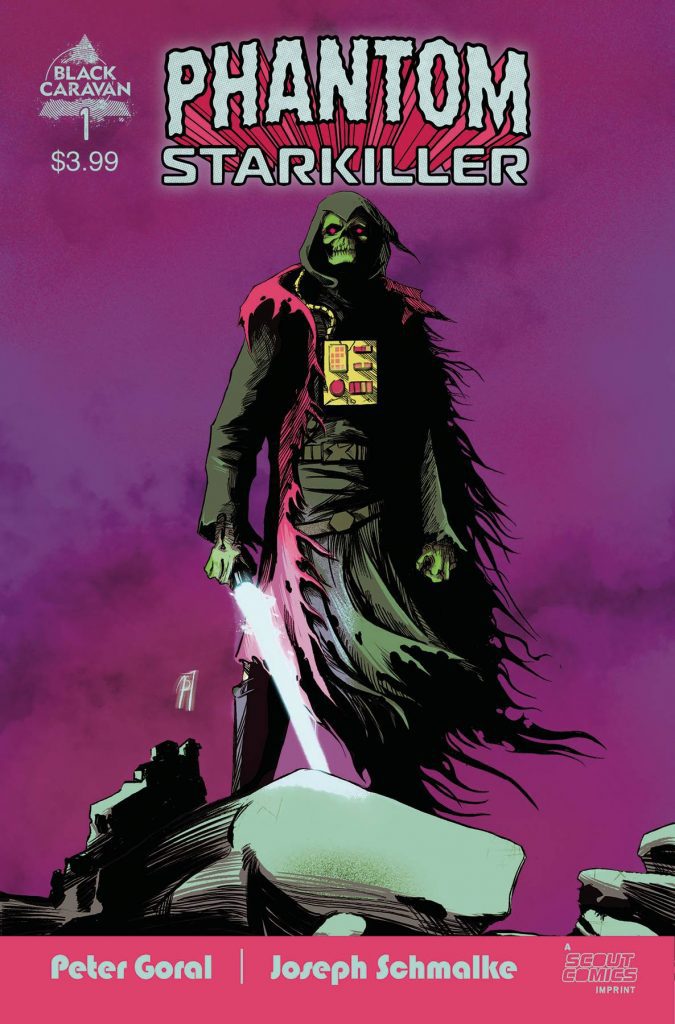 I was blown away when I first heard that there was going to be a comic book based on Phantom Starkiller. The character has popped up as a ReAction figure from Super7 in all kinds of color variations, but to finally get to read a story with this ghoulish swashbuckler was a dream come true. Thanks to Scout Comics and Black Caravan, we get to go to a far galaxy and watch the mayhem unfold.

From Peter Goral, Joseph Schmalke, and Joel Rodriguez comes a violent space-faring adventure, and I absolutely love it. We join Phantom Starkiller as he heads on a mission for his leader, The Count, to secure a gem on a well-guarded planet. Right off the bat, we get to see Phantom dispatch guards with his nifty laser sword as he makes his way to the gem. We get an origin flashback to see how Phantom became the reaperish being he is now. Coming face to face with his past, Phantom must find a way to stop a villain he can’t simply slice and dice.

Goral has created such a fun story with this issue- it’s like a throwback action comic brought it life in our day and age. It’s over the top, violent, and above all-, an entertaining read! Schmalke’s artwork is dead-on; I love his page breakdowns and designs. The action scenes are a treat for the eyes if you aren’t squeamish. The book’s entire feel is that of a throwback comic book, harkening back to simpler, more enjoyable times.

I have been waiting to read this issue for some time now, and now I wonder when we get more. Oh, and Super7- we need Ultimate figures of Phantom and the Count. Phantom Starkiller is one part Skeletor, one part Deadpool, mix in some Star Wars for good measure, and you have a hit on your hands.