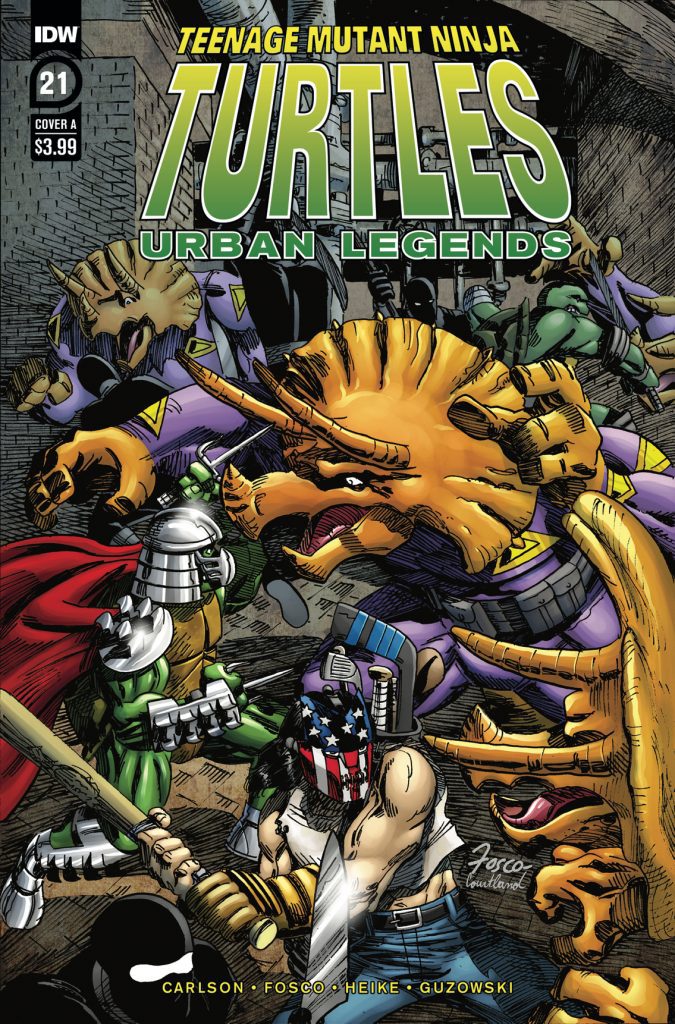 We open up on the setting of several police officers parked in front of a museum after hours, their lights blazing up the scene in their red hue. The police are responding to the assistance request by the security guard on duty. As the police approach the steps to the front door, the security guard runs out, screaming for help yelling to the police about the dinosaurs coming to life. Not believing him, they attempt to make him take them inside to confiscate what he’s been drinking. Getting interrupted by a loud KRAKADOOM, they all start to get out of the way of a single Triceraton as it crashes out of a window destroying the nearest police car, it’s lights still flashing.

We cut to Sara and Donny inside the museum, his arm cannon smoking from the shot he just fired. After Donny sent a Triceraton through a hole, Sara lunges towards it in an attempt to attack. Right as she is doing this, the Triceraton activates what Donny thinks is a bomb. A moment later, Donny is staring at a smoking burn mark on the ground in the exact spot that Sara and the Triceraton just were. While thinking about what he should do next, the police finally decide to come inside. Donny thinking on his feet finds the remote to his Aircar and makes a quick escape.

Elsewhere in the sewers, we are shown Casey Jones, Letherhead, and Mike fighting more Triceraton. Just after he breaks his hockey stick over the head of one of the Triceraton, it’s shot down by several arrows. Leonardo and Raphael, who is at this time also The Shredder along with the Foot Clan, run through trampling the fallen Triceraton — saving Casey and Mike in the process. We see Letherhead has killed several Triceraton and is in the middle of fighting another one in defense of his transmat teleportation device. This device is also allowing the Triceraton entry onto Earth. Having no other choice, Mike throws one of his nunchucks at the device, shutting it down and preventing more Triceraton from coming through and ending this battle. Casey, along with Raphael and the Foot Clan, part ways to party in celebration of victory. Mike and Leatherhead speak with Dr. X about repairing the device.

After reading this issue, I am left with more questions than answers, and that is just what a great series will do. They will answer some questions and leave you with more. This issue managed to capture my attention the entire way through. It was able to balance combat with the non-combat very well, in a way that didn’t feel forced. This feels as though I saw a small part of a larger story at play, and I am fully on board with this.

As with all comic books, the artwork is a crucial part of telling the story. While this isn’t quite my style, It gave me a feeling like I was reading something that someone handcrafted instead of using a mouse and keyboard. Though it took a little getting used to, I am starting to gain an appreciation for this old school feel in this digital age. They don’t go too overboard with their art, but they aren’t very basic either. It’s as if they found a happy median between hand-drawn and digitally created. It works very well for the Ninja Turtles.

While the way they went about creating this artwork is a cool concept, this more basic design does leave a little more to be desired and makes you use your imagination to fill in some of the finer details. For me, it has a lot to do with the turtles and the Foot Clan. When I see the turtles, they look off to me. At times they look slightly oblong. The ninja look like walking black blobs with swords. The art style isn’t the most consistent; at times, it feels as though they are putting more details into some things and less into others.

Overall, I think this is a great comic book, and if you are reading the series, you won’t want to miss this. If you haven’t read it, then I suggest you read this if you are a fan of grittier darker Teenage Mutant Ninja Turtles. They have a lot of really cool things going, and it feels as though they have a few different storylines going on, and they can connect while also remaining separate to bring you a complete story. My biggest question while reading this is, what happened to Master Splinter?