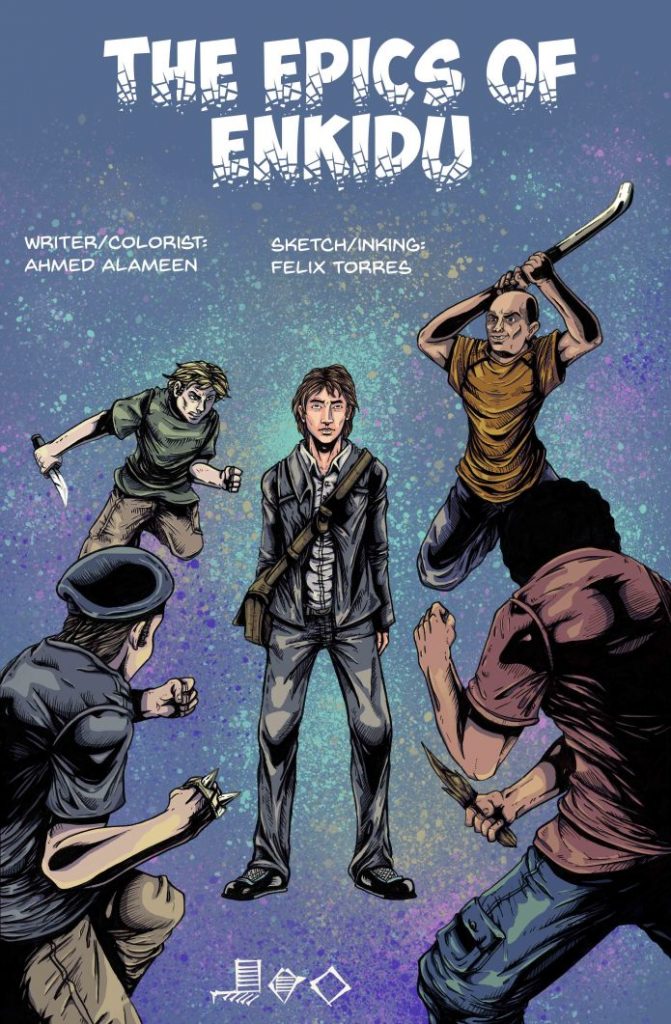 Working in the Special Education sector, I was captivated by the storyline of “The Epics of Enkidu,” which centers around an autistic individual. The project is available now on IndieGoGo at https://www.indiegogo.com/projects/the-epics-of-enkidu#/.

The “Epics of Enkidu” is a modern-day story stemming from the legendary mythology of Enkidu. Beginning in Baghdad, Iraq, readers are immersed in a society encompassing an autistic man, Enkidu. The reader is introduced to differences in the ways he sees the world and engages in society. He also has the ability to calculate physics and movements quickly. This allows him to stop situations before they can start. With his lightning speed, Enkidu can seriously overtake his adversaries. I’ll refrain from giving too much detail, being considerate of any spoilers. You’ll have to read it for yourself!

Creator, writer, and colorist Ahmed Ameen has produced an impressive first issue! The story alone is a great read! Teaming up with Artist Moacir Muniz was an excellent choice. The crisp and sharp artwork is another plus to this comic–it’s another reason why I wanted to discover what “Epics” was about. I enjoyed how Ameen and Muniz were able to portray rapid motion in certain scenes. And another mentionable quality is the shading used when Enkidu runs into less savory characters; it’s the implicit details that heighten “Epics”’s praises.

“Epics” has effectively captured the varying emotions and perspectives often related to Autism. Enkidu must learn how to live in a less than understanding world. Most of the comic is written in the third person, representing the challenge of communication Enkidu faces. His keen mind is always on alert as he interacts with the physical world surrounding him; however, people he encounters don’t fully understand what is really behind his lack of words. Another significant aspect of “Epics” is its setting. I’m pleased that the story is a global one. It demonstrates that Autism isn’t reserved for people of a specific race, class, or region. Autism affects everyone, which leads me to an extra bonus: resources. Ameen has included resources that support Autism organizations and causes. They definitely deserve some research!

I’m excited to see this fantastic comic book really catch on! You won’t be disappointed–it’s an excellent read. You won’t want to miss the “Epics” legacy! Find it today at IndieGoGo at https://www.indiegogo.com/projects/the-epics-of-enkidu#/.