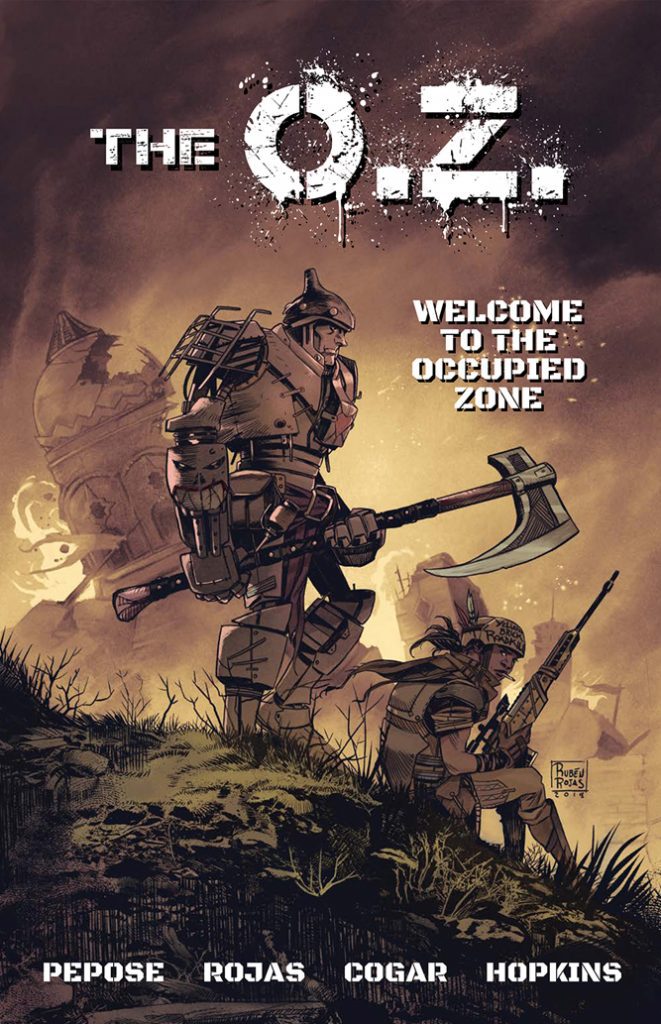 Alright, the truth is, I have never been the biggest fan of The Wizard of Oz. I liked the flying monkeys, but I don’t know; it never clicked with me. But I have been a big fan of David Pepose, the man who brought the world Spencer and Locke and Going to the Chapel. So when he announced The O.Z., I knew I had to give it a shot. So I backed it, and late last year, I got my reward in the mail, and let me say- This is the Wizard of Oz I want.

Written by Pepose, with art by Ruben Rojas, Whitney Cogar, and DC Hopkins, the oversized first issue is absolutely amazing. An outstanding balance of the OZ lore mixed with the all too real emotions we all have felt. The story takes place after Dorothy’s visit to Oz. Way after, as she is now an older woman, watched over by her granddaughter, also named Dorothy. But this Dorothy took a different journey; a soldier in the Iraq War. A soldier with a lifetime of pain and loss in her mind and soul. PTSD ways heavy on her, as she is a woman who feels like she no longer belongs in her hometown. Times got hard, and then a tornado strikes and sends the new Dorothy to a very different Oz. Known as the Occupied Zone, she encounters the Tin Soldier and learns that all those crazy dreams her grandmother spoke of were true.

Gone is the glitz and magical nature of the world, replaced with a war-torn battlezone. It’s like the original Dorothy came to an Oz filled with wonder and amazement that a kid would imagine, and the O.Z. is more of the place a soldier would be at home with- warring factions, lives to save, tales to kick. I love the parallel there, whether it was intentional or not. Pepose has crafted a fantastic start to a series that honors Oz’s legacy yet blazes a trail all their own. Rojas and the team create such amazing visuals- I love the monkeys’ designs, the Tin Man, Dorothy, all of them. I love the twists thrown in as well, which I won’t spoil for you.

This is a fantastic start to a new legend of Oz. You can pick it up today at www.davidpepose.com.