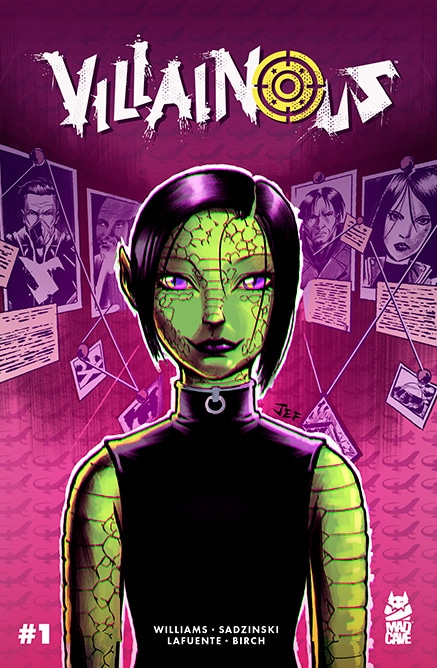 Villainous by Mad Cave Studios quickly caught my attention with its vivid cover. You won’t want to glance over this one!

Crime has ramped up in New York City. Foul play by the Shadow Order is suspected. That’s where the Coalition of Heroes comes in. Matilda ‘Rep-Tilly’ Anderson is the Coalition’s newest recruit. She is assigned to learn the operations under the direction of Showdown, which includes his wily antics. Stumbling upon the Coalition’s next move in their mission, Rep-Tilly learns that being a hero is no easy task. Coupled with hero training, she comes face-to-face with the Shadow Order. Tilly must decide her fate: whose orders will she follow–the Coalitions or the Shadow Order?

As mentioned earlier, the attention grabber was due to cover colorist Miguel Angel Zapata’s bold hues. Colorist Joana Lafuente was able to portray the grime and crime of New York City with her use of drab earth tones. A vibrant roll call ensued, with the reader introduced to key figures in the Coalition of Heroes and The Shadow Order. The reader is enraptured as writer Stonie Williams effectively echoes the yesteryears of radio show programming. The reader can “hear” the booming broadcaster announcing the characters. Artist Jef Sadzinski captures the reminiscent essences of comics, of which older readers can appreciate. Letterer Justin Birch successfully adds to Tilly’s character development with the use of stylized text boxes.

As a novice, I am quickly becoming a fan of Mad Cave Comics! Villainous does not disappoint. I appreciate the implicit details this comic incorporates, from being able to “hear” the story being told to boldly seeing the lineup of characters of the Heroes and The Shadow Order. I greatly admire that all readers can enjoy Villainous! I relish in the feeling of delight of getting wrapped up in an exceptional story!