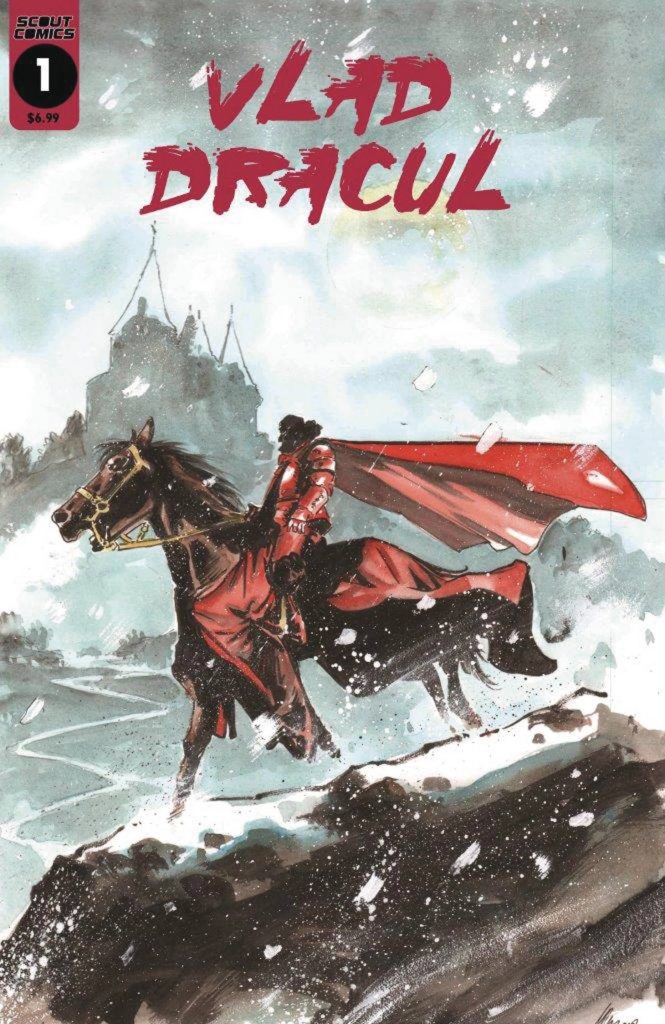 When people hear the name Dracula, visions of a mysterious, caped, bloodthirsty vampire pop into their heads, that image comes from the Bram Stoker version of the character, one who bears little resemblance to the real-life figure who inspired the character. And due to numerous films, comics, paintings, and even video games, that version of the character is what everybody associates with the name. And while the vampire version of Dracula might strike fear into the hearts of millions, the legend might not be as terrifying as the history that inspired it.

Vlad Dracul II (also known as Vlad Dracula) had Voivode’s title (warlord) of Wallachia. During his time as Viovode, the opposing armies of the Ottoman Empire feared him. As a ruler, he was obsessed with conquering the surrounding lands and waging war against anybody who would dare cross him. This blood lust and his need to conquer led to the legend that we all know and love today.

The first issue of Vlad Dracul starts not long before his war with the Ottoman Empire. It is the winter of 1456, and wolves surround Katharina and her brother Istvan in the middle of a snow-covered forest. Here, we are introduced to Vlad Dracula, an intimidating and mysterious figure who helps them escape the wolves and get out of the woods.

From there, we fast forward five years and at the beginning of Vlad’s rebellion against Sultan Mohammed II. We learn what happened to Istvan, who became one of Vlad’s right-hand men, and Katharina, who he is having an affair with. When the Sultans men come to negotiate, things take a bloody turn, and we see Vlad for who he really is. He is full of hate and rage, which easily overcomes him and turns him into a monster.

This is a wonderful story about the man behind the myth. Written by Andrea Mutti and Matteo Strukul, they tell the story of Vlad like never before. The true story is much more fascinating than the legend, and here it is told in such vivid detail. At 61 pages long, the first issue is a heavy read. It’s dense and filled with so much historical detail, which is not a bad thing, really, but it can feel like a chore at times. Andrea and Matteo obviously did their research and knew the period very well. As far as the story’s historical accuracy, I couldn’t tell you how much it is true, but I can tell you that it’s believable, and I can’t wait to read more.

Mutti also did the artwork, and every frame looks like a painting. The setting is prime for dark colors blending in with the snow-covered hills’ beautiful backdrop, and he absolutely nails it. When releasing such a beautifully fleshed story, you need equally beautiful art, and this book is a wonderful combination of both.

Scout Comics Vlad Dracul is off to a good start. It’s a heavy read, so you might have to be in the right mindset to really enjoy it. But, it has everything you could ask for from a historical war epic, and I definitely think you should check it out.