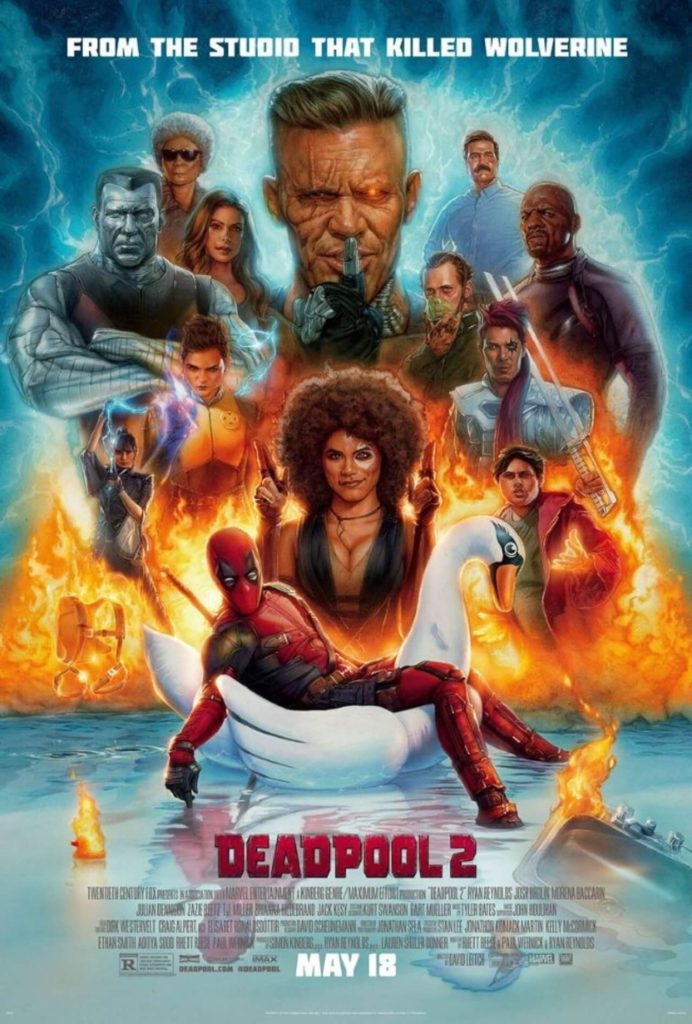 In 2016, Twentieth Century Fox and Marvel Comics shocked the world when they unleashed the rated-R anti-hero, Deadpool. Starring Ryan Reynolds, the film broke the unwritten superhero rules and held nothing back, becoming an instant hit. Now in 2018, the merc with a mouth is back, but does the sequel fall victim to the sophomore slump?

From director David Leitch, the second installment in the Deadpool legacy goes heavy on the gore and violence, with less of a focus on the crude humor seen in the first film. For me, this is a step in the right direction. Reynolds once again plays Wade Wilson, aka Deadpool, a disfigured assassin for hire with a mind that tips off the sanity scale. Deadpool is living the life: business is booming, he is with the love of his life Vanessa (Morena Baccarin), but in an instant, he descends to rock bottom. From trying to save a mutant teenager named Russell (Julian Dennison), to fighting a soldier from the future in Cable (Josh Brolin), to assemble his own super team, the crimson mercenary has his hands full in this film.

Reynolds was born to play this role, and this second film hammers that point down. The humor, the delivery, the overall vibe of Reynolds on screen screams Deadpool. The addition of Cable is a major one, as the two have shared plenty of comic history in the past dating back all the way to their first appearances. Brolin completely owns the role of the displaced super soldier with a muddled past and opens the door to a plethora of films in his own right. For me, the character that made the biggest impact besides the main two stars has to be Domino, played by Zazie Beetz. The luck powered mutant has been a mainstay with X-Force in comics, so it only makes sense she would kick butt alongside Cable in this film.

Of course, there is one major character that stole the show for me as well, but I’ll leave that one alone for those who haven’t seen it yet. We also see the X-Men from Deadpool one play a role, as Colossus (Stefan Kapicic) and Negasonic Teenage Warhead (Brianna Hildebrand) make a glorious return, with new recruit Yukio (Shioli Kutsuna) in tow as well. But not all of the returning cast are heroes, as Deadpool’s favorite taxi driver Dopinder (Karan Soni) is back with the laughs, as is barkeep Weasel (T.J. Miller) and Blind Al (Leslie Uggams).

The comedy here is top notch, as is the violence factor, which is ramped up in a good way. The jokes here, from stabs at rival comic companies, the Marvel Cinematic Universe, the production studio, to one of Deadpool’s creators himself, are all spot on. Oh, and even Wolverine isn’t safe from Deadpool’s foul mouth. The film feels more like a superhero film, yet, Deadpool is still a few years short of being heroic, but that’s who he is. The character is not a by the book hero, he thrives when he hits rock bottom, and it’s evident here the filmmakers understood the character’s history.

I really enjoyed this film on so many levels. From the fourth wall breaking, the massive amount of Easter eggs for comic fans to find, to one of the coolest introductions to a character in a Marvel film yet. This is still the best rated-R superhero franchise out right now, due to the violence and seldom crude humor. For me, it beats the original and sets up an eventual film for Cable’s superteam, X-Force.