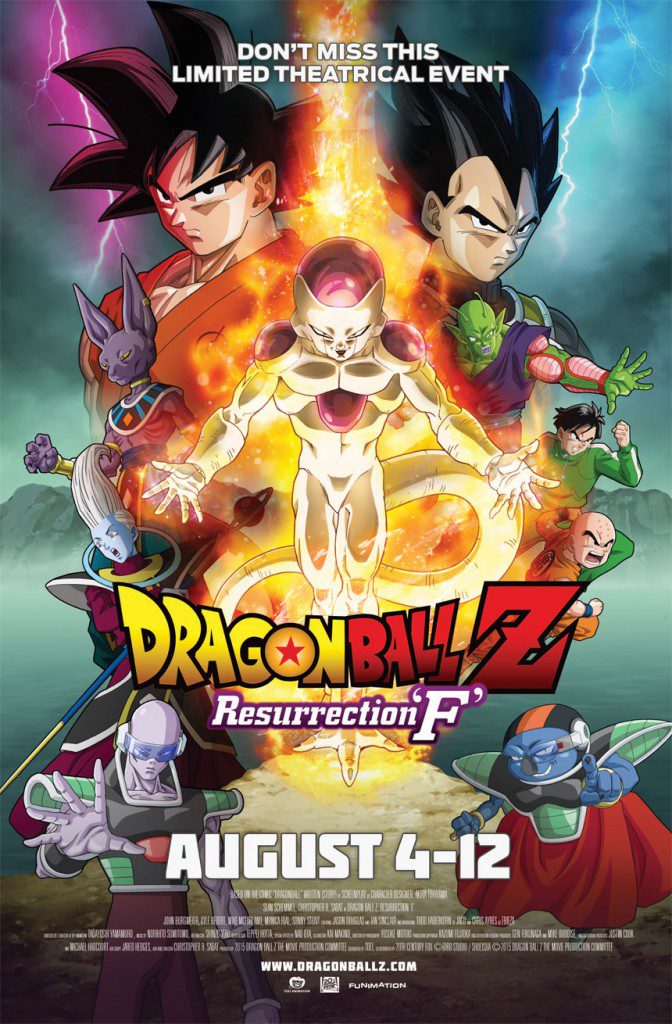 Fans of anime (Japanese animation for those that might not know yet) know exactly what Dragon Ball Z is. One of the best anime of all time, creator Akira Toriyama’s all out action series proved to push the envelope on what an anime can do. High paced battles, impossible odds, and plots that throw you for a loop, Dragon Ball Z stand outs as a hallmark in animation. The story of martial arts master and all around goofball Goku defending the Earth from cosmic and time traveling threats, accompanied by his super powered and skilled friends and family is one anime fans love and cherish.

Now, in 2015, Funimation has brought new animated film to North America, and it has brought a familiar face back into the fold. With Resurrection ‘F’, we see the classic villain Frieza come back into the fold and back from the dead. Frieza, a conquering alien who was destroyed during the animated series, is wished back to the land of the living with the legendary dragon balls, and he is out for revenge. But can the combined efforts of Goku, his saiyan brethren Vegeta, and the rest of the gang stop a newly revived and powered up Frieza?

The film brings us back into the world of Z, complete with Goku, Vegeta, Piccolo, Krillin, Tien, Gohan and more. It’s great to venture back into the world, and to see the high octane battles we come to expect. Resurrection ‘F’ doesn’t disappoint, not once bit. With Frieza getting a spiffy new gold final form, we see Goku and Vegeta both reach Saiyan God levels of power, which come with a snazzy new blue hair color. The battles are what you would expect- extremely high paced, Earth shattering violence like no other series can do. Let’s not forget the voice overs for the North American release, all which do an amazing job, as always. I have always been a fan of the U.S. voice cast, and this movie just proves once again why Christopher Sabat, Monica Rial and the rest are bestowed with the honor of voicing such iconic characters.

The animation looks better than ever, with some modern day twists put into to that makes the animation pop. I watched the film during its limited release at the theaters, and it was a completely sold out audience, an audience that cheered like crazy when the credits rolled. It’s a testament to what anime can do, without overthinking the issues of the world. Dragon Ball Z: Resurrection ‘F’ hits every mark a fan would hope for. The only downside I can see is that it is deep rooted into the Dragon Ball Z history, so if you are new to the franchise, then you might be a bit lost. Other than that, it’s an amazing film, worthy of the name Dragon Ball Z.

Score: I give Dragon Ball Z: Resurrection ‘F’ a perfect 5 out of 5.