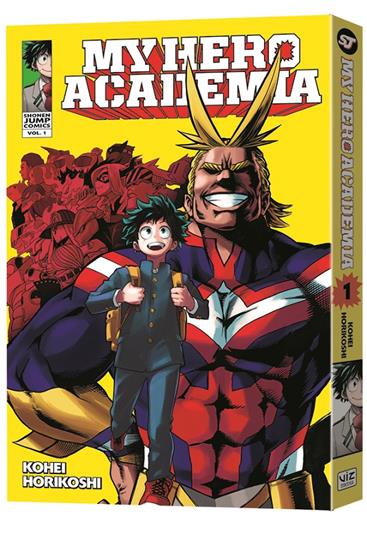 MY HERO ACADEMIA is rated ‘T’ for Teens and print volumes carry an MSRP of $9.99 U.S. / $12.99 CAN each. The series is also available digitally via VIZManga.com and the VIZ Manga App and from the Nook, Kobo, Kindle, iBooks, comiXology, and GooglePlay stores. Future English editions of MY HERO ACADEMIA, which is ongoing in Japan and also serialized in current digital issues of WEEKLY SHONEN JUMP magazine, will be published bi-annually under VIZ Media’s Shonen Jump imprint.

What would the world be like if 80 percent of the population manifested superpowers called “Quirks”? Heroes and villains would be battling it out everywhere! Being a hero would mean learning to use your power, but where would you go to study? The Hero Academy of course! But what would you do if you were one of the 20 percent who were born Quirkless? Middle school student Izuku Midoriya wants to be a hero more than anything, but he hasn’t got an ounce of power in him. With no chance of ever getting into the prestigious U.A. High School for budding heroes, his life is looking more and more like a dead end. Then an encounter with All Might, the greatest hero of them all, gives him a chance to change his destiny…

“MY HERO ACADEMIA has been thrilling readers of WEEKLY SHONEN JUMP and has become the single most requested new series for English publication from the magazine’s current roster,” says Mike Montesa, Editor. “Readers will be in for a wild ride in this inventive new series that puts a fresh spin on the classic superhero concept. Join the action as a fateful encounter gives young Izuku Midoriya a chance to become part of the next generation of Heroes!”

WEEKLY SHONEN JUMP is published digitally each week by VIZ Media and features the latest installments of some of the world’s most popular manga series released to English readers across North America on the same day as the magazine’s general print release in Japan. More info is available at: ShonenJump.VIZ.com.

In addition to the U.S. and Canada, WEEKLY SHONEN JUMP is available to readers in the U.K., Ireland, South Africa, Australia, and New Zealand at ShonenJump.VIZ.com and through the WEEKLY SHONEN JUMP App for iOS and Android devices.

For more information on MY HERO ACADEMIA and manga titles from VIZ Media, please visit www.VIZ.com.