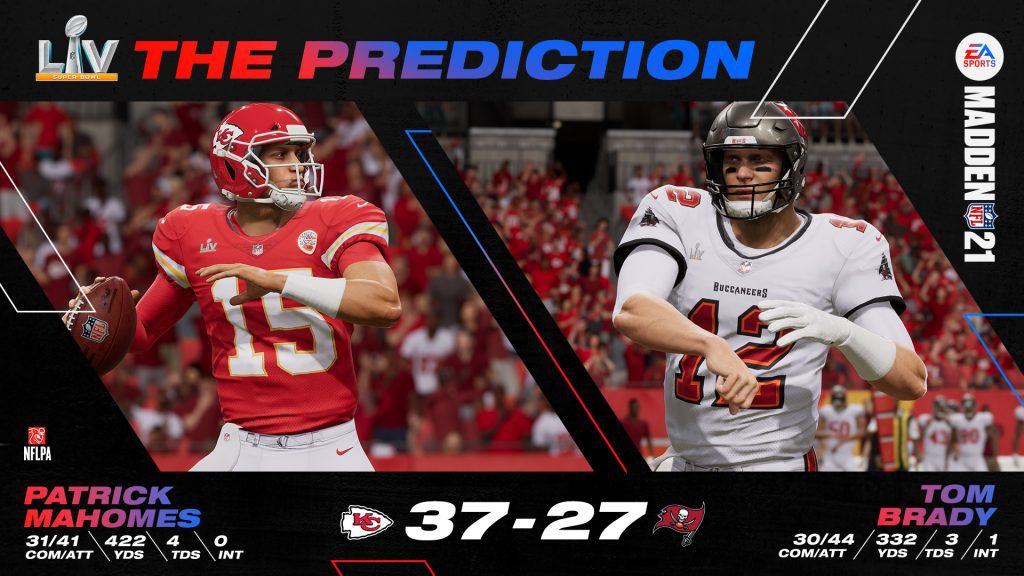 The Chiefs had an uphill battle with Tampa Bay having an unprecedented home-field advantage at Raymond James Stadium and a roster with three previous Madden NFL cover stars, Rob Gronkowski (‘17), Brady (‘18) and Antonio Brown (‘19). To win, the Chiefs high-powered offense had to go all out battling back and forth with the equally electric Tampa Bay offense, with both teams taking to the air early and often throughout the game.

Kansas City’s relentless attack ultimately proves to be too much for Tampa Bay, and Mahomes’ mobility is the standout factor, avoiding Tampa Bay’s pass rush late in the game to pull away for the victory. Both starting quarterbacks put up stellar performances with Mahomes throwing for 422 yards and four touchdowns, cementing his second MVP title, and Brady throwing for 332 yards, three touchdowns and one interception.

Here’s how it all goes down in Madden NFL 21:

EA SPORTS Madden NFL 21 is available for Xbox Series X|S, PlayStation®4 and 5, Xbox One, PC via Origin and Steam, and recently launched on Google Stadia. In celebration of Super Bowl LV, players can get the Madden NFL 21: Superstar Edition now for 60 percent off.* EA Play members can also get more out of Madden NFL 21 with trial access and monthly in-game rewards.

*OFFERS MAY VARY OR CHANGE. SEE RETAILER SITE FOR DETAILS.