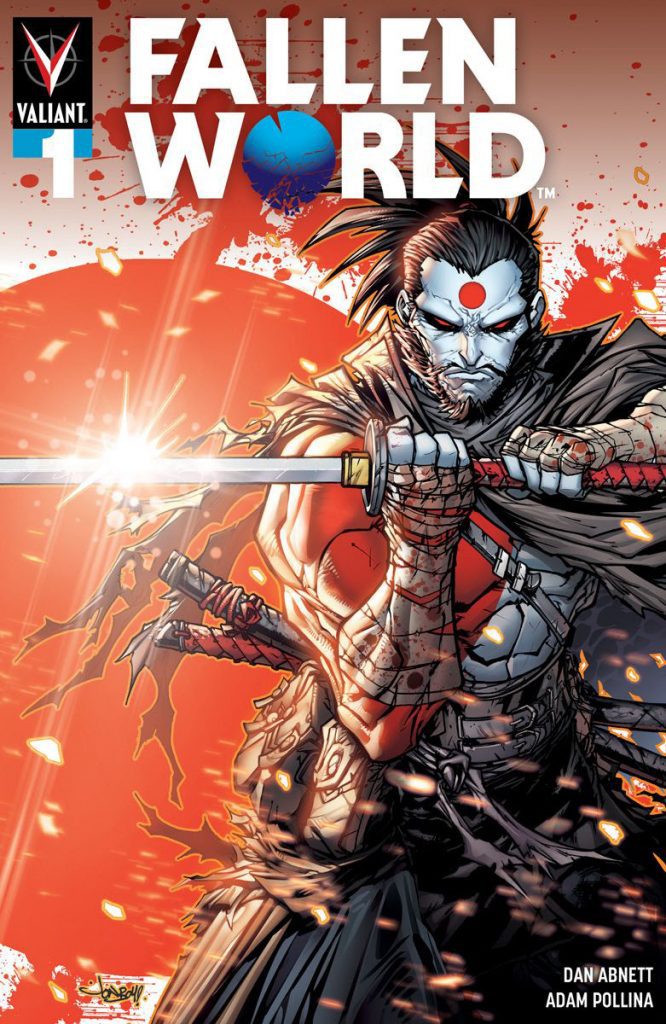 Valiant Entertainment has blessed us once again with the release of Fallen World #1. The story picks up in the year 4002 in the common era. Earth’s surface is uninhabitable, so to escape turmoil New Japan is created. A world in the skies to keep humans safe. In this world, positronics are a slave class controlled by artificial intelligence they’ve named “Father”. “The Fathers son, Rai, is half man half positron but completely against this controlling unjust society and this is where our story begins.

Rai leads a revolution against The Father and New Japan falls, literally, which took place in Valiant 4001 A.D. storyline. The space ship crashes to the surface of Earth, and its sectors shatter and scatter across the desolate land. There are few survivors, but their voices don’t go unheard. Bloodshot can hear them, and he responds by taking action in an attempt to save as many lives as possible. He responds to those closest, loudest, and most insistent. This leads him to a large stone face, with a blue capsule lodged in its forehead. The blue capsule speaks to him, begs for his help to free him, and Bloodshot abides. As he touches the blue aura, he is taken over by an unknown force.

Rai meanwhile is trying to neutralize conflict between two classes whom previously were not equal, and now in a new world have level playing ground. He steps away to let heads cool, and this is when scouts of his alert him of a newly found sector. Rai arrives to not only find a survivor but find his colleague Bloodshot, now controlled by Father and now no longer a friendly colleague.

These 20 pages seemed to fly as I could not stop reading. I cannot wait for issue number two where an epic battle clearly lies ahead. Dan Abnett yet again has set a plot perfect for lots of action and deep moral issues. This paired with Adam Pollina’s stunning art made for an issue I wish had more pages. Not only are the conflicts relevant, its just outright interesting. I was looking forward to this series and admittedly haven’t been disappointed. Be sure to check this out before the next is dropped. I highly recommend the series, and I give it a perfect score!