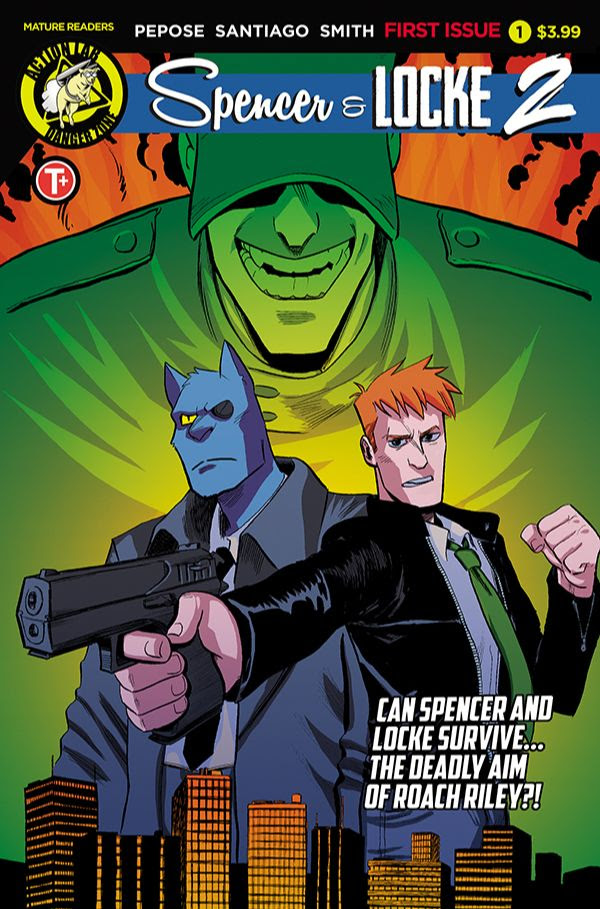 Spencer & Locke first came on the scene in 2017, and it quickly grew a huge cult following. The series was a unique story that combined the wonder of “Calvin and Hobbes” and the dark grittiness of “Sin City” to create one of the best psychological thrillers to hit the shelves in a long time. The story continues in Spencer & Locke 2, and it continues to grow its arsenal of unusual comic mash ups and intense action.

When we last saw Detective Locke and his imaginary partner Spencer, they were investigating the death of Locke’s high school sweetheart. The two were led down a path that forced Locke to face his past, as well as imagine a new future with a daughter he never knew he had. The series signed off with an epic battle that would have consequences for Locke and his family.

Not a lot of time has passed since the last series ended. Locke has been put on leave by Internal Affairs. He is fighting to prove his innocence of bloody events that occurred in the past, as well as win custody of his daughter Hero. In the midst of this, he is offered a deal that he can’t refuse. In exchange for his services as a detective, Hero’s adopted parents will grant him full custody. Reluctantly, Locke takes the case. But before they know what they are up against, they end up in the aim of psychotic killer Roach Riley. Can Spencer & Locke stop him before it’s too late? We’ll just have to wait and see.

By writer David Pepose and artist Jorge Santiago, Jr, “Spencer & Locke” is a series that keeps the suspense going. The dynamic between the two leads has changed a bit, with Spencer being more aggressive this time around. It makes sense, considering he is a manifestation of Locke’s mind. It stands to reason that what Locke is feeling, that is transferred into Spencer, and Locke has been through a lot. This adds a new layer of unpredictability to the story.
From the very first pages, it’s clear that Roach Riley is going to be a force to be reckoned with. He’s clearly a psychopath, but one that most likely believes he is doing the right thing, which makes him that much scarier. Pepose and Santiago continue their homage to classic comic strips with Roach, modeling his story after “Beetle Bailey.” It may seem like a strange fit, but it works so well.

The writing by Pepose grounds the story and brings a real heart to book. The relationship between Locke and Hero is full of promise and hope, and it’s one that I’m sure we will see more of in upcoming issues. I’m really rooting for him to get custody of his daughter, but in this world, things don’t always go as planned. It’s also fascinating how this will affect Locke’s relationship with Spencer, and if things will ever be the same again.

The artwork by Santiago, Jr. is top notch. It’s dark and gritty like any good noir story should be, but it also has its own feeling to it. The comic strip homages throughout the book are great as if the creators of the strips drew it themselves. It’s great to bounce back between the bright, colorful strips and the beautiful art style of the rest of the book.

The second part of the Spencer & Locke series is off to a great start. With solid writing and a great art style, it’s a must-read. It’s a smart, intense, suspenseful story full of mystery and action. If you haven’t read any of the series yet, go pick up the first collection, then dive into part 2. It’s excellent, and I promise you won’t regret it.