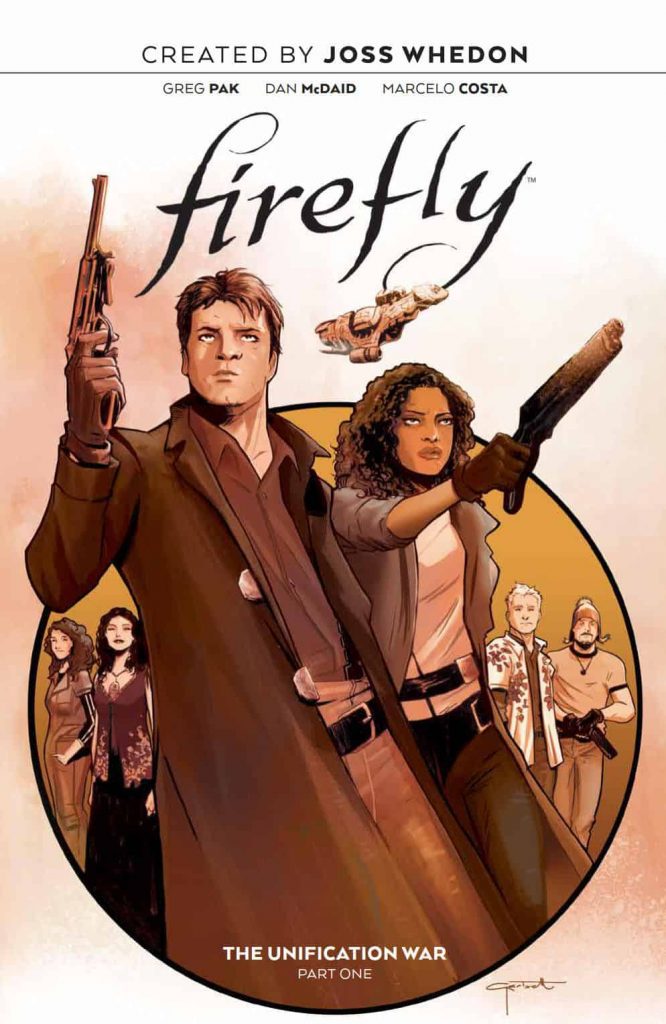 Back in 2002 Firefly aired for the first time on TV, and viewers instantly fell in love. Despite the overwhelming praise it received from its numerous fans, the show was canceled only after one season. Through relentless and persistent badgering by the fans, Universal Studios took on the world of Firefly, creating a movie that wrapped things up nicely. Despite getting some movie closure, fans still want more Captain Malcolm Reynolds and the gang, and comics are a great way of continuing their story.

Firefly – The Unification War was written by Greg Pak, Illustrated by Dan McDaid, with the color done by Marcelo Costa.

It’s slow to start, and basically rips scenes and plot points from the show. In fact, it literally peppers in lines from the series on filler pages. The story starts out much (exactly) like the movie; Captain Malcolm Reynolds’ ship, the Serenity, falls apart while zipping around space due to his cheapness, and the crew is forced to find an odd job that’ll pay in order to make repairs. Things go south quick, which is where the story begins to find it’s own legs to stand on.

Attacked in the air by an old Alliance Cruiser flown by a group called the Unificators. The Serenity is forced to flee, landing on the moon of Bethlehem. The crew takes up work acting as an escort to a group of pilgrims. We see flashbacks to times during the Unification war where Malcolm and Zoe had gone through some pretty terrible experiences. These scenes are painted red, and the intensity is well captured in red hues and terrifyingly detailed expressions or anguish.

The Unificators blast a moon-wide signal informing everyone, including the many bandit gangs around, that Malcolm and Zoe, his first mate, are both wanted war criminals. With a massive bounty now placed on their head, things get complicated pretty quick. As their past comes back to hunt them, things are discovered about our crew of lovable misfits, Reynolds in particular. War makes criminals of everyone, but his hands might be bloodier than most…

I’ll be honest, I was not overly impressed by the art. Some panels were so devoid of detail. I had trouble discerning what was going on or just who was speaking. I’m not sure if the artist thought that messy lines mean fast action sequences, but it just came off looking like a bit of a mess. Some of the pages were great, especially the flashbacks, but overall the art wasn’t up to par with Will Conrad and his Serenity series, and it left a little to be desired.

I loved the story, even if some moments fell a little short. In a few instances the characters had to describe what was going on, or else the reader would have a hard time following along. If you’re creating a comic, a visual story-telling medium, but are unable to accurately depict what is going on visually, you may need to adjust. We see characters who love each other very much, shoot each other while. This felt entirely against their nature, as they tend to go to great lengths to ensure the other is out of harm’s way, and they were currently in a dangerous situation, only making things worse for each other. Sure, sometimes the characters were known for crossing the line at times, but this seemed shocking, even for them.

As a huge Firefly fan, I am probably speaking from a biased place here, but I wasn’t blown away. The art looked rushed, the characters didn’t feel like themselves, and the story was slow to build up speed, only to fall out of the sky just as things were starting to soar. If you’re a fan of Firefly, you may just want to read the synopsis.