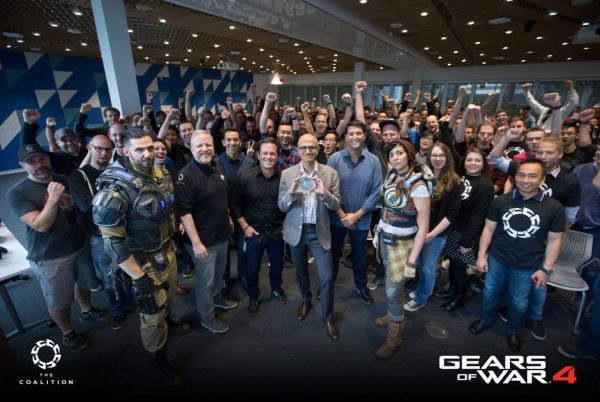 Gears of War 4 Readies for the Fight

(XBox Wire)– Today, Microsoft is pleased to announce that Gears of War 4 has been released to manufacturing ahead of its October 11th worldwide release. This event, also known as “Going Gold,” is a major milestone in development, marking the release of the gold master disc to Xbox replication facilities around the world.

The event was celebrated today by Microsoft’s Board of Directors, who traveled to the Microsoft Canada Excellence Centre in Vancouver, B.C., to help mark the occasion alongside Phil Spencer, head of Xbox, and Rod Fergusson,  head of the Vancouver-based development studio The Coalition, responsible for the development of Gears of War.

“This has been a real homecoming for me,” said Fergusson, who started his career in game development at Xbox before joining Epic Games where he was executive producer on the Gears of War trilogy. “Coming back to Xbox to lead a studio of talented people from around the world, all focused on Gears of War, and doing so in my home country of Canada in one of the best cities in the world for technology and entertainment has been a dream come true.”

“Ten years ago, Gears of War was the killer app that brought millions into the Xbox family,” said Spencer. “It’s combination of innovative technology, unique gameplay, and trademark storytelling changed the game forever.”

“With Gears of War 4, I’m very proud of what the team at The Coalition has achieved. Not only is it the most technically ambitious Gears game yet – with split-screen play on both Xbox and Windows 10, Xbox Play Anywhere support, Cross Play across all co-op modes, and available 4K graphics – it’s a return to the grounded, tense and brutal tone that made so many fall in love with this universe, story and characters for the first time.”

Earlier today, fans got a final preview of the game in the Gears of War 4 Launch Trailer  that appeared online ahead of its television debut on the US telecast of Monday Night Football on ESPN (game time 5:30 PST).  The trailer is the first Gears launch trailer to feature exclusively in-game footage, and is set to a haunting cover of Metallica’s “Nothing Else Matters” by American singer-songwriter Lissie.