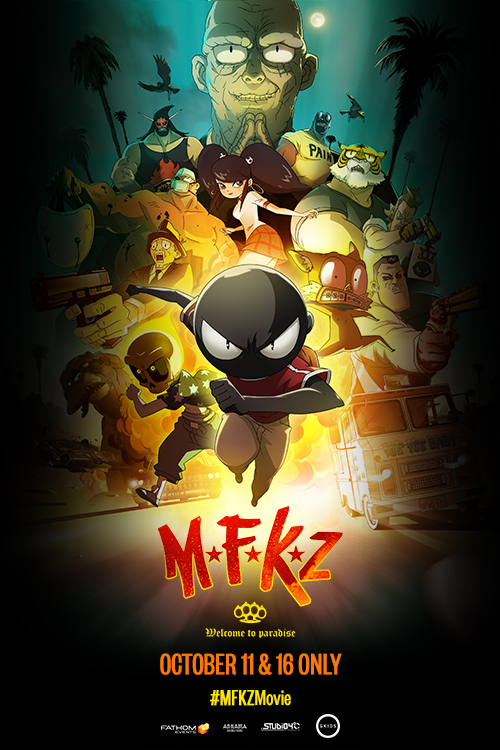 GKIDS, the acclaimed producer and distributor of animation for adult and family audiences, has announced the English voice cast for MFKZ. MFKZ is a collaboration from French comic artist Guillaume “Run” Renard, original creator of the comic series, and ultra-hip Japanese animation house Studio 4°C, creators of the acclaimed anime features “Tekkonkinkreet,” “Genius Party,” and “Mind Game.” The film will feature the voices of Michael Chiklis (The Shield, American Horror Story), Giancarlo Espositio (Breaking Bad, The Usual Suspects), Jorge Gutierrez (The Book of Life, Son of Jaguar), Dascha Polanco (Orange is the New Black, Joy), RZA, Vince Staples, and Danny Trejo (Machete, Predators). The “Tekkonkinkreet” dream team of co-director Shojiro Nishimi and art director Shinji Kimura reunite to bring to life MFKZ, a dark but stunningly animated sci-fi vision mélange of anime, film noir, and Lucha Libre, which made its world premiere at the 2017 Annecy International Film Festival. The Fathom event will include an exclusive behind-the-scenes look and interview with the film’s creators.

MFKZ centers on young Angelino and his skull-and-flame pal Vinz, who live in a seedy tenement in an L.A.-inspired dystopian metropolis – a burnt-out, gang-and-cockroach-ridden, neo-urban hell. Following a scooter accident Angelino starts experiencing migraines, strange hallucinations and fits of rage-inspired superpowers, as he slowly awakens to the truth of his origins: he is half human and half Macho, a supernatural alien race that is bent on taking over the planet.

GKIDS and Fathom Events partnered to present the US premieres of “Fireworks” and “The Night is Short, Walk On Girl,” and are set to present Satoshi Kon’s “Perfect Blue” to cinemas on September 6 and 10.

“We are super excited to be working with Studio 4°C and Ankama to release MFKZ in North America.” GKIDS Founder and CEO Eric Beckman said. “This is a blistering, genre-breaking animated film for adults, unlike anything that has come before. We are thrilled with the voice cast and can’t wait to share this film with audiences on October 11th.”

“Anime fans should be prepared for a wild ride with MFKZ,” Fathom Events CEO Ray Nutt said. “This exciting animated feature is yet another high-point of our ongoing partnership with GKIDS.”

GKIDS is a producer and distributor of award-winning feature animation for both adult and family audiences. Since 2010, the company has scored an astounding ten Best Animated Feature Oscar nominations with The Secret of Kells in 2010, A Cat in Paris and Chico & Rita in 2012, Ernest & Celestine in 2014, The Tale of The Princess Kaguya and Song of the Sea in 2015, Boy and the World and When Marnie Was There in 2016, My Life as a Zucchini in 2017, and The Breadwinner in 2018.  GKIDS also handles North American distribution for the famed Studio Ghibli library of films, one of the world’s most coveted animation collections with titles Spirited Away, My Neighbor Totoro, Princess Mononoke and others.  GKIDS recently launched ANIMATION IS FILM, an annual LA-based film festival. ANIMATION IS FILM embraces the highest aspirations of animation as a cinematic art form and is a vocal advocate for filmmakers who push the boundaries of their work to the fullest range of expression that the medium is capable of.