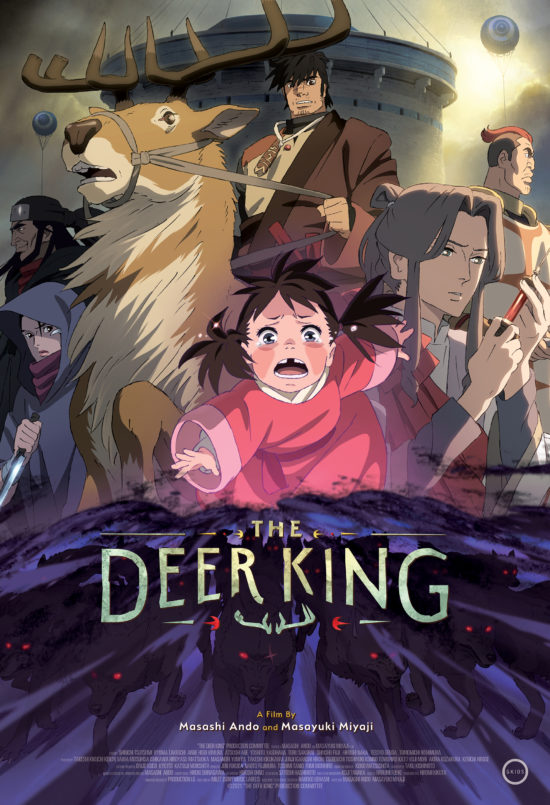 GKIDS TO RELEASE “THE DEER KING” IN SELECT THEATERS NATIONWIDE

Animated by the acclaimed studio Production I.G, the film marks the directorial debut of acclaimed animator Masashi Ando, who previously worked as a character designer, animation director, and key animator with the famed Studio Ghibli (Spirited Away, Princess Mononoke), and with directors Satoshi Kon (Paprika, “Paranoia Agent”) and Makoto Shinkai (your name.). Co-director Masayuki Miyaji is best known for directing the 2009 series “Xam’s: Lost Memories” and work on Studio Ghibli films such as My Neighbors The Yamadas. The original book series, by author Nahoko Uehashi, won the Booksellers Award and the fourth Japan Medical Novel Award in 2015, and has printed 2.2 million copies in Japan to date. Known for their work in series and feature animation, notable works from animation studio Production I.G include the legendary film Ghost in the Shell, and highly influential series “FLCL,” “Haikyu!!,” and “Psycho Pass.” The studio’s 2011 feature A Letter to Momo and 2015 feature Miss Hokusai are also distributed by GKIDS.

Tickets will be on sale June 10th at FathomEvents.com, TheDeerKing.com and participating theater box offices. The ticket on-sale date may vary based on local cinemas, so please check back often. (Theaters and participants are subject to change).

In the aftermath of a brutal war, former soldier Van toils in a mine controlled by the ruling empire. One day, his solitary existence is upended when a pack of wild dogs carrying a deadly and incurable disease attack, leaving only Van and a young girl named Yuna as survivors. Finally free, the pair seek out a simple existence in the countryside but are pursued by nefarious forces. Intent on protecting Yuna at all costs, Van must uncover the true cause of the plague ravaging the kingdom—and its possible cure.

The Deer King is a sweeping fantasy epic that marks the directing debut of Masashi Ando, whose work on such landmark films as Spirited Away, Paprika, and Your Name. helped shape the world of modern animation.

GKIDS is the producer and distributor of award-winning feature animation for both adult and family audiences. Since 2010, the company has scored an astounding 12 Best Animated Feature Oscar nominations with The Secret of Kells in 2010, A Cat in Paris and Chico & Rita in 2012, Ernest & Celestine in 2014, The Tale of The Princess Kaguya and Song of the Sea in 2015, Boy and the World and When Marnie Was There in 2016, My Life as a Zucchini in 2017, The Breadwinner in 2018, Mirai in 2019, and Wolfwalkers in 2021. GKIDS also handles North American distribution for the famed Studio Ghibli library of films, one of the world’s most coveted animation collections with titles Spirited Away, My Neighbor Totoro, Princess Mononoke and others; as well as the critically acclaimed television series, Neon Genesis Evangelion. GKIDS also hosts ANIMATION IS FILM (AIF), an annual LA-based film festival which embraces the highest aspirations of animation as a cinematic art form, and is a vocal advocate for filmmakers who push the boundaries of the medium to its fullest range of artistic expressions. www.gkids.com

Fathom is a recognized leader in the entertainment industry as one of the top distributors of content to movie theaters in North America. Owned by AMC Entertainment Inc. (NYSE: AMC); Cinemark Holdings, Inc. (NYSE: CNK); and Regal, a subsidiary of the Cineworld Group (LSE: CINE.L), Fathom operates the largest cinema distribution network, delivering a wide variety of programming and experiences to cinema audiences in all of the top U.S. markets and to more than 45 countries. For more information, visit www.FathomEvents.com.