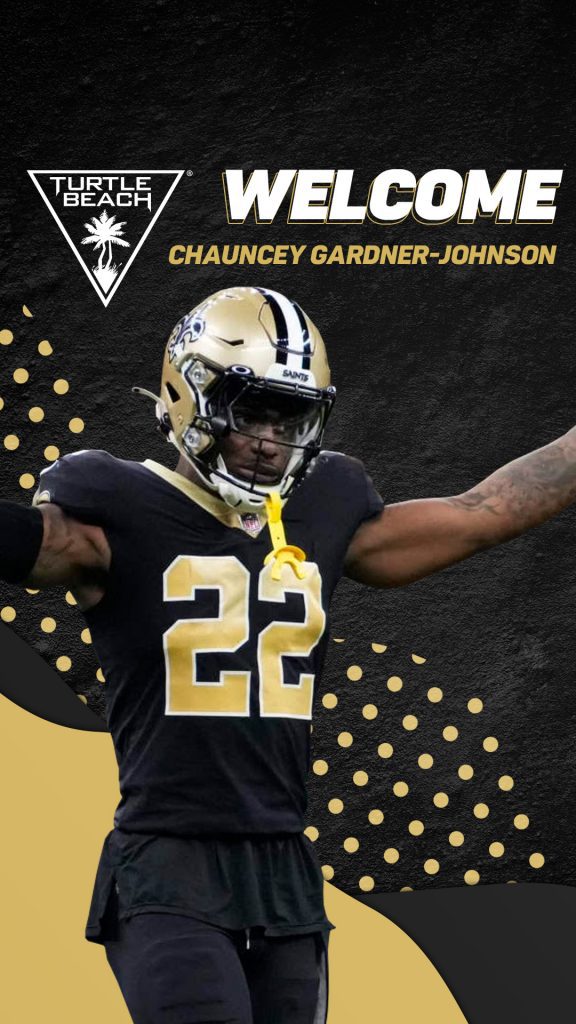 Leading gaming audio and accessory provider Turtle Beach Corporation (Nasdaq: HEAR) today announced its best-selling Turtle Beach console gaming accessories and award-winning ROCCAT PC gaming accessories brands have partnered with New Orleans Saints’ starting Safety, Chauncey Gardner-Johnson. Gardner-Johnson joins other pro athlete gamers, including NBA stars Grayson Allen, Immanuel Quickley, and Josh Hart, who have teamed-up with Turtle Beach and ROCCAT for all their gaming equipment needs so they can dominate on the digital battlefield. When players compete at the highest level against the best in the league, they expect the best equipment to help them achieve success. Chauncey Gardner-Johnson’s mouse and keyboard setup includes ROCCAT’s Kone Pro Air and Vulcan TKL Pro, while he alternates between ROCCAT’s Syn Pro Air and Turtle Beach’s Stealth 600 Gen 2 for high-quality game audio and chatting with other players.

“We’re excited that Chauncey Gardner-Johnson’s on-field competitiveness and expertise plays into his passion for gaming, and we’re excited for him to join the team,” said Ryan Dell, SVP of Global Marketing, Turtle Beach Corporation. “As the CEO of his own esports business, Chauncey Gardner-Johnson understands what it takes to win both as an individual and as a team, and this makes him a great partner for developing and producing content.”

Chauncey Gardner-Johnson (CJ) was drafted in the 2019 NFL Draft by the New Orleans Saints. He quickly became a defensive leader known for his bold personality and his defensive prowess. Originally from Cocoa, Florida, CJ chose to play college football for the Florida Gators where he was a standout student athlete, earning MVP honors on multiple occasions in bowl games. As his on-field talents solidified he also became an avid gamer, streaming popular games like Call of Duty, Grand Theft Auto, Madden, and Fortnite with his 2X Global gaming team.

When he’s not using the Syn Pro Air, Gardner-Johnson can be seen using Turtle Beach’s Stealth 600 Gen 2 headset. Turtle Beach’s Stealth 600 has been the best-selling gaming headset series since they debuted because it offers an abundance of key features and top quality for an attractive $99 MSRP. Additionally, Turtle Beach just launched the new Stealth 600 Gen 2 MAX model which offers a massive best-in-class 48-hour battery life plus multiplatform compatibility with Xbox Series X|S and Xbox One, PS5™ and PS4™, Nintendo Switch™, PCs and Mac, and comes in new Black, Arctic Camo, and Midnight Red colorways for a $129.99 MSRP.