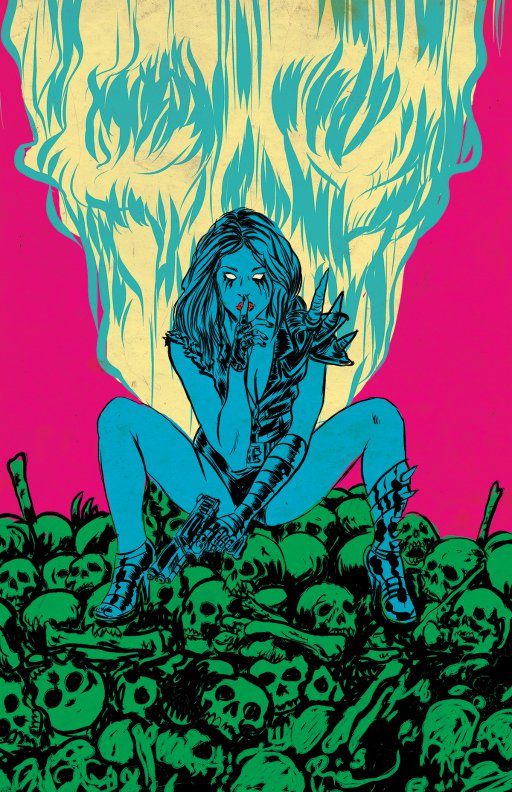 Godkiller Book One collects the eight issues of the first Godkiller series from Black Mask Studio, all in a beautiful hardcover collection (in a regular version or the variant cover version pictured above, which was available as a part of this year’s Local Comic Shop Day). The series is the epitome of an adult comic book, meaning this shouldn’t be read by kids or by those who have a weak stomach.

The world of Godkiller is a dark, nightmarish version of the world, one where sex, violence and blood seem to reign supreme. In this world, teenager Tommy is on a quest to find a heart for his dying sister, which takes him on a journey with a member of a secret society in Mulciber and a hooker, Halfpipe. We see the very dark, sadistic world from Tommy’s eyes as any innocence he had left is ripped away from him, leaving him helpless. It’s with the help of Mulciber and Halfpipe, and later with the deadly bounty hunter Soledad, that Tommy even manages to trudge along.

Writer Matt Pizzolo (Young Terrorists) crafts a story that not only embodies a nightmare, with all its helplessness and fears in tow, but also the ability to give and give for those you care about, holding no regard for one’s self. We see this with Tommy, but also with the pink haired Halfpipe. Artist Anna Wieszczyk crafts the perfect visuals for this hard Rated-R story. The scratchy lines, the mixed media look to it all, it all helps to visualize the chaos seen in Godkiller.

With a new series for Godkiller coming to continue the story, this is a perfect time to dive into it. This is a very mature story, and very much not for children. Nudity, sexual content and violence abounds across the whole story, but helps to really show how dangerous this fictional world really can be.