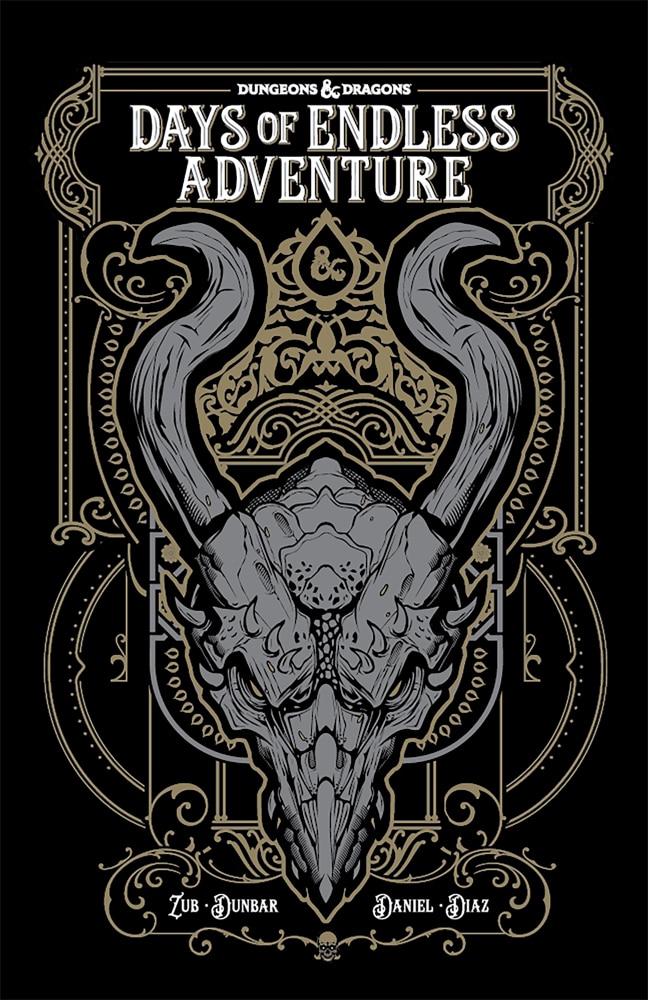 For this review, I look at a book focused on something I know all too well: Dungeons & Dragons. Let’s take a look at Dungeons and Dragons: Days of Endless Adventure from IDW Publishing. This collection is written by Jim Zub, with art by Max Dunbar, Nelson Daniel, Netho Diaz, John-Paul, Joana Lafuente, Thiago Ribeiro, Milen, Glauber Matos, JB Neto and Neil Uyetake

At the beginning of the collection, we see a person running from two gargoyles; the moon is high in the sky. Swooping in, one of the gargoyles picks her up. Releasing herself from her bag, she falls atop the second; in an attempt to fight back, she whips out her dagger and aims for a headshot only for her blade to shatter on impact. With no blade to fight Delina the Elf takes hold of the horns. Steering the gargoyle’s head downwards, she grinds its face into the ground, allowing her to jump off the gargoyle and run away. Seeing two of the city watch, she cries out for help. With a loud “SKREEE” the Gargoyles fly in and rip the watch to shreds. In a vain attempt to yell at the gargoyles to stop, Delina runs on. Soon she finds herself in The Wide, which is the most famous market in the upper city, only at this hour late at night is empty.

Trying to catch her breath, Delina unintentionally moves around the market, hearing a conversation between two people. After getting caught by two workers, the same two gargoyles drop in and start towards her. Deciding that enough is enough, she stops running and makes a stand. Holding her arms akimbo, she casts a spell; only since she is a wild mage, she doesn’t know what she will cast this time. Smoke is now filling up behind her, after several POPs a towering figure jumps from behind to in front of her between her and the gargoyles. With this sudden change the stone flyers turn tail and run. The new figure rushes in swinging at both. The battle was well fought but good will always prevail over evil. With the destruction of the gargoyles, Delina and her savior are stopped by the Watch. Questioning Delina and her new friend about the recent murder of the other two Watchmen, Delina doesn’t give a very convincing account of what just happened. Not believing them, the Watch orders the two to put down their weapons. Delina casts ‘Color Spray’ to allow her and her friend an escape.

Learning that her new friend’s name is Minsc, she explains why she is in Baldur’s Gate to enlist his help. Not being able to waste time with the Watch still in pursuit, they run on. The only problem with this is that they soon run out of the city and into a wall. With nowhere to go and Minsc’s last attempt at diplomacy having failed, they prepare to fight. Just then, before their very eyes, two hooded figures fall from the roofs onto the Watch knocking them out.

We flashback to a young Delina running through the woods with another Elvin child. Teasing the other, she jumps to a tree branch to never get caught by the boy. Having longer clothes helps the boy to pull her down, which also trips him. Tumbling out of the tree, the boy finally catches Delina. Holding her down, he proceeds to taunt her about his superiority when suddenly her eyes glow bright blue, and lightning shoots out of her fingertips, launching the boy from her and into a tree. The look of shock rather than pain is evident on their faces as they wonder what just happened.

Back in the present, Minsc holds his sword at the ready and lightning crackles around Delina, ready to attack the two thieves should they attempt to bring harm. Not wanting to fight the taller of the two hooded figures removes his covering, his counterpart following suit speaking words of peace between them. Hearing the Watch in the distance and getting ever closer, the shorter of the two we later learn is named Shandie, which recommends Delina and Minsc following them. Barely needing any convincing at all, they both follow the two thieves down a secret passageway.

The stairs lead down into a room mostly filled with loot. The rest of the night is filled with conversations between the two rogues Shandie the shorter of the two, and Krydle the taller one. Delina explains to them why she is there and asks the two for their help in accomplishing her quest. Not bothering to speak in private, Krydle and Shandie speak in Thieves Cant, which is a kind of sign language for rogues, to discuss whether or not they should help. They agree to help and then fill in Delina about the finer details of the city.

A good rogue will always have some connection, and that is also true for Shandie and Krydle. Sitting in a library, Krydle addresses an older gentleman known as The Fetcher. Krydle informs the man about what they need, asking him for help to accomplish their mission. After some thought, the Fetcher writes something down on paper and seals it, agreeing to help the party at no charge if they will only deliver a letter to a certain member of the parliament of peers. The Fetcher bids them farewell, Krydle mutters obscure words as they leave the old man seemingly alone.

Wow! That is the first thing that comes to mind when I finish reading this. The rest of the graphic novel doesn’t fail to keep raising the bar. Each adventure manages to go bigger than the previous while still providing a proper story arc.

From a Dungeon Masters’s perspective, this feels more like three separate adventures that contain callbacks to the previous. It all flows nicely to provide a great story of a ragtag team. The cover reminds me of the collector’s edition of the core rule books, and I really like it!

The first adventure felt just like a “getting the group together” type of story that will give us a reason why this group is together. This is great! A good coming together story can really set the tone of the story as a whole and this one works well. The entire time I read this I kept thinking that the writers played D&D themselves and then wrote what happened into a comic book. I’ve read other comic books that do the same thing, utilizing D&D to create stories, and that is what D&D is for storytelling. To create stories with your friends. The dialogue felt modern while still maintaining that fantasy feel. The conflicts felt believable, and the world feels lived in. My favorite part of this whole comic book has to be at the end where they provide a one-page character sheet for each of the party members so that players can play them or DMs such as myself can use them in their games, something I fully intend to do.

The artwork of this book is also modern. The characters are drawn in the style that I personally prefer over others. There is plenty of detail, even when it is a panel showing a larger scene or a landscape. The art is clean; everything has a distinct feel as if it is supposed to be there and not an accident. I have no trouble determining who is who and with the dialogue explaining things without overusing exposition, I have no issue learning what something is if I wasn’t sure before. Every character is distinct and different; no two people looked like copies even when they wore the same uniform. This helps the world to feel more realistic than fantasy.

While I believe they used D&D to help create the story, it does seem like they got the easy way out at times. For example, after the group has had their first encounter and are working together as an actual team, they are taken to Barovia, only for this adventure to be cut short and transition into something else entirely. While this isn’t necessarily a bad thing, I personally was looking forward to reading about them going through the “Curse of Strahd campaign.” Another issue I had was that occasionally there would be a full-page panel with beautiful artwork, no words or dialogue. At the bottom of the page, I saw a box stating that the dialogue was translated from whatever race should have been speaking, only no one was speaking. This is mostly an annoyance to me as it is not needed at all. Some of the conflicts I feel should have gone differently, and it felt to me that the Dungeon Master fudged their dice rolls for the sake of the story.

Being a Dungeon Master myself, I am always on the lookout for inspiration for my next session, whether in real life or media. Getting the opportunity to read a graphic novel entirely about D&D has given me so much inspiration. I feel that I’m rolling Nat20s in creativity. The entire time I read this, I imagined that actual people were playing the character around a table and trying to think of the most creative and exciting thing they could. This book featured everything a good session of D&D would have, plenty of critical fails and Nat20s. The encounters felt realistic, and the victories felt earned. If you are a nerd to any degree, if you are a D&D player or DM, even a GM, and want inspiration, I highly recommend this collection.