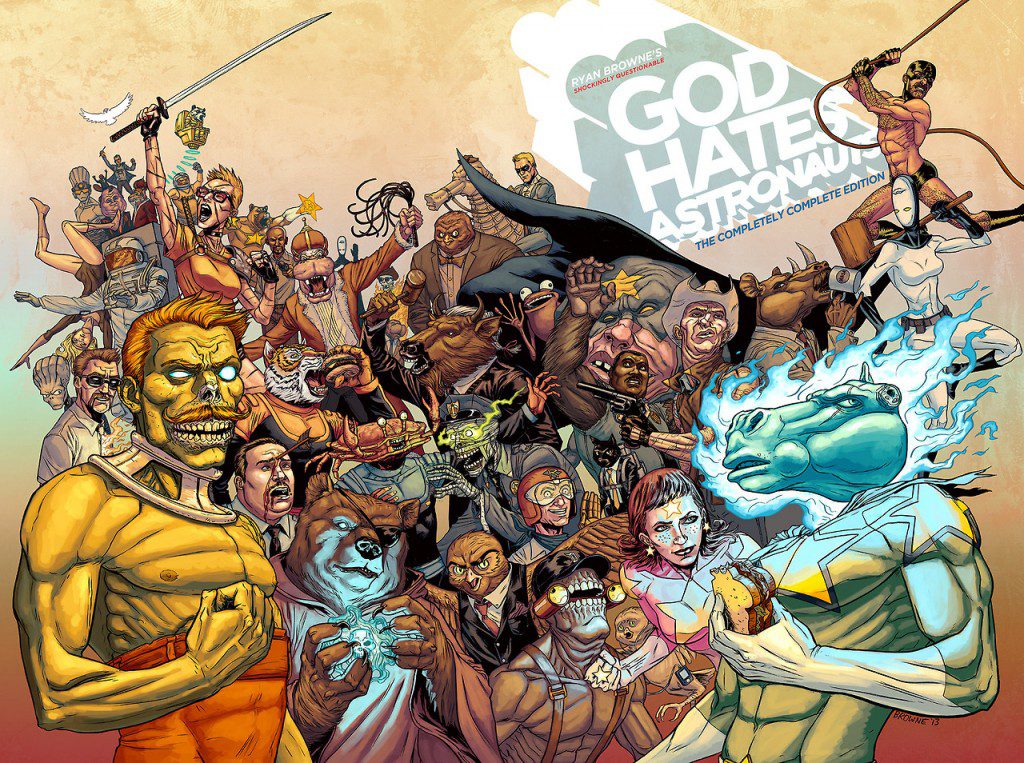 You might notice that there is a publisher missing above: well, that’s because this amazing hardcover collection of God Hates Astronauts: The Completely Complete Edition, is self-published by the writer/artist/creator Ryan Browne (his work on Image Comic’s Bedlam is pretty amazing). Though the website Kickstarter, Browne collected his web-comic into a hardcover and put it up for the world to see and fund if they so choose. Well, they chose to, me being one of the 1,768 people that backed his project. So, what is God Hates Astronauts?

That’s a tough one to answer. First, as I said earlier, it’s a collection of a web comic Browne produced. Now, as for the content: it’s sheer madness, plain and simple.

That’s the best way I know how to describe the amazement that came over me while reading GHA. I’ll throw out some words to help conjure up the ideas in your head: ghost cow head, immortal boxer, a homage to Family Matters leading dad Carl Winslow, bank robbing owls, a really, really big superhero head, bears. Lots and lots of bears. There, did that help?

Without giving anything away in the story, I will say that GHA is a blast of pure imagination. THIS is the kind of book we need more of: it pulls no punches, it swings for the fences, and it looks amazing doing so. I should mention that there is plenty of violence and language, so mature readers only here.

Browne’s art style is crisp, clean and brings to life some outrageous characters. The collection itself is super well done, complete with a spot gloss hardcover, as well as a look in to what GHA started out as: hint, it was a 24 hour comic. The entire collection is something to behold, as it feels like higher quality than books the big two are cranking out on a weekly basis.

I knew nothing about Browne’s GHA when I stumbled across it on Kickstarter. Now that I have the book in hand, I can say that I am proud to be a backer of such a high quality project. Take note of this guy: I have no doubt that we will see a lot more of Browne in the comic industry in the very near future. As for GHA? I can’t recommend it enough, I give it a perfect @@@@@ out of FIVE.