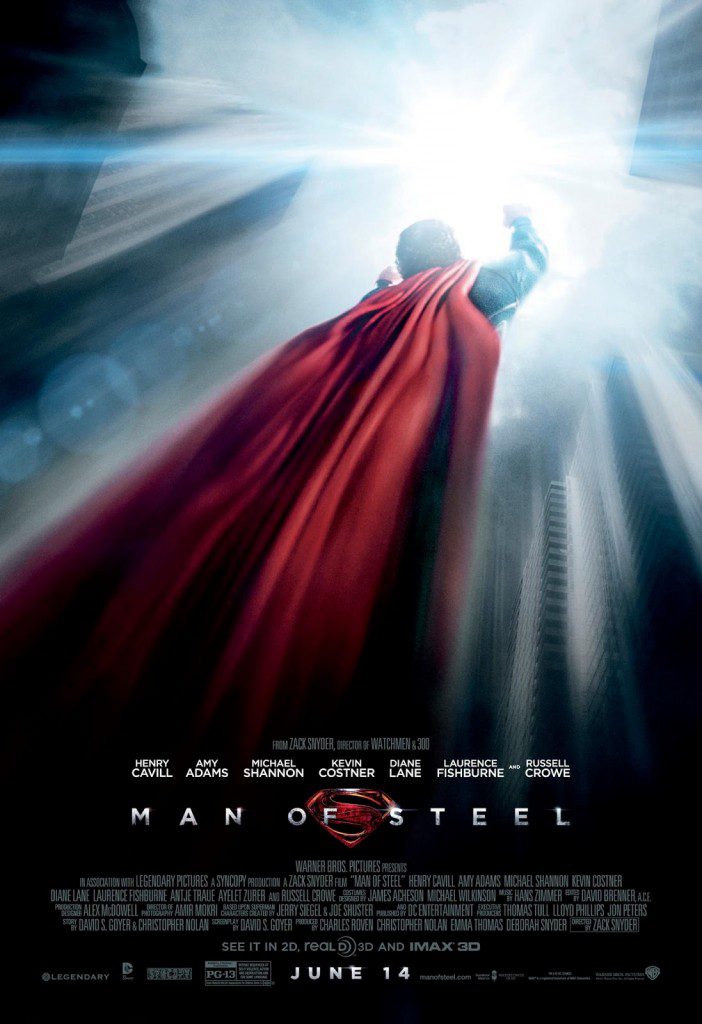 You’ll believe a man can fly: that was the tagline to the now classic 1978 Superman film starring the late, great Christopher Reeve. Bringing the iconic DC Comics character to life is no easy feat, as the weight of the DC Universe’s cinematic fate rests on his cape. The 2006 Superman Returns tried to capture lightning in a bottle by being a sequel to the past films, but it failed to reach the heights fans hoped for. In 2013, a new Superman has risen: one that many are hoping will be the start of a DC Comics film renaissance. But does the film leap small buildings in a single bound, or is trying to live up to the Reeve legacy its Kryptonite?

The film comes from a director that is no stranger to comic books: Zack Snyder, the man behind the film adaptations of 300 and Watchmen, is behind the lens for this massive undertaking of a film. The film stars Henry Cavill (Immortals) as Clark Kent/Kal-El or better known as Superman. We see the difficult childhood of the resident alien of Krypton, as well as how he reacts to his origins coming to light. When General Zod (Michael Shannon-8 Mile), a renegade Kryptonian, comes searching for Supes, you know that violence has to follow.

The problem with a lot of the Superman films were the constraints of what could be done during that time period: Reeve’s Superman was amazing, but it lacked the huge, impactful battles we see in films these days, and it seemed like Superman Returns lacked battles altogether. Luckily, Man of Steel gets it right with massive, destructive battles throughout cities, farmland, and space. It features the battles we have all longed for in a Superman film, and now we finally get it, and it is amazing.

Cavill stepped up to be the leading man in arguably the biggest movie of the year, and he doesn’t disappoint. From the coyness of Clark Kent to the hero of all heroes, Cavill makes a stand as the Superman for a new generation. Michael Shannon’s Zod, along with his followers, brought the intensity and danger to new levels for a Superman flick: and isn’t that what a great hero needs, a great villain? With Amy Adams as Lois Lane, Russell Crowe on board as Superman’s space dad Jor-El, and Kevin Costner as his Earth dad, Pa Kent, there is no shortage on talent here, from beginning to end.

What it all boils down to is a triumph: this film is a triumph for Warner Bros, DC Comics, Superman fans, and moviegoers as a whole. This is the Superman film I have been waiting for: with titanic knock down, drag out fights and an actor that can pull off the last son of Krypton for a whole new generation of fans. This is the film to beat this year, and I don’t know how many films will be able to stand toe to toe with the Man of Steel.