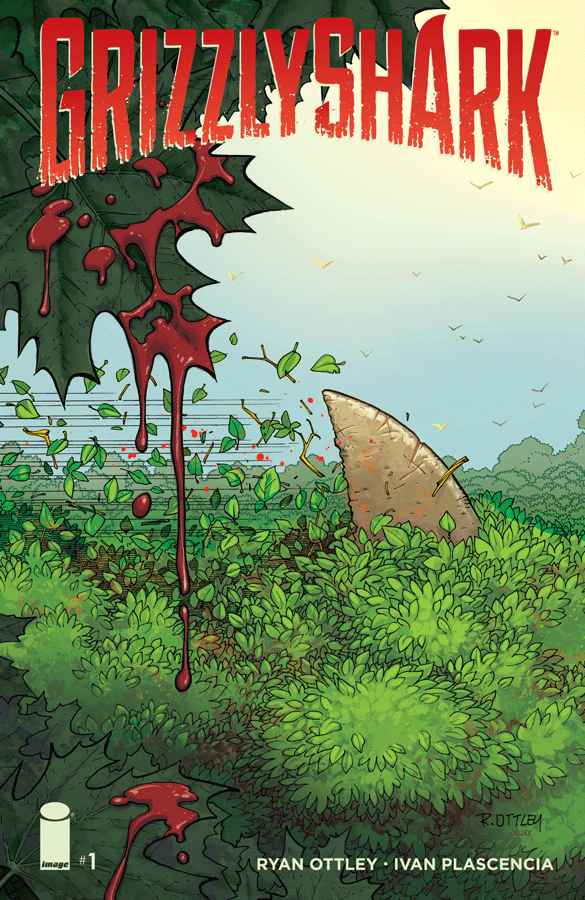 (Victor Valley)—Back in 2010, Ryan Ottley (Invincible) and Jason Howard (Astounding Wolf Man) released a book at Image called Sea Bear & Grizzly Shark- mixing up the two beasts, with the shark stalking the woodlands and the bear being a terror of the sea. It was a one shot, black and white comic, and it was terrific. Now, in 2016, we get Grizzly Shark #1, which is a re-release of the original story, but in full color and kicks off all new stories with the next issue.

Ottley is easily one of my favorite artist: his work on Image Comic’s Invincible (with The Walking Dead’s Robert Kirkman) is outstanding. With Grizzly Shark, we get a gore fest, a blood bath from page to page, and I loved every minute of it. The completely over the top book puts the dangerous Grizzly Shark on the hunt in the wild, attacking a father and son duo while being hunted by an “expert” at eliminating beasts.

The artwork, though a little different compared to Ottley’s Invincible, looks terrific and really pushes the envelope on the different ways a shark bite can end someone’s existence. Ultra violent, this book deserved to be in color, and I am thrilled to finally see it for all of its glory. Written and drawn by Ottley, Grizzly Shark is monster thriller with enough awkward humor to make you laugh at the destruction.

I might be sick, but I cannot wait until the second, all new issue hits. Let’s see where this incredibly hungry shark goes for a sequel.