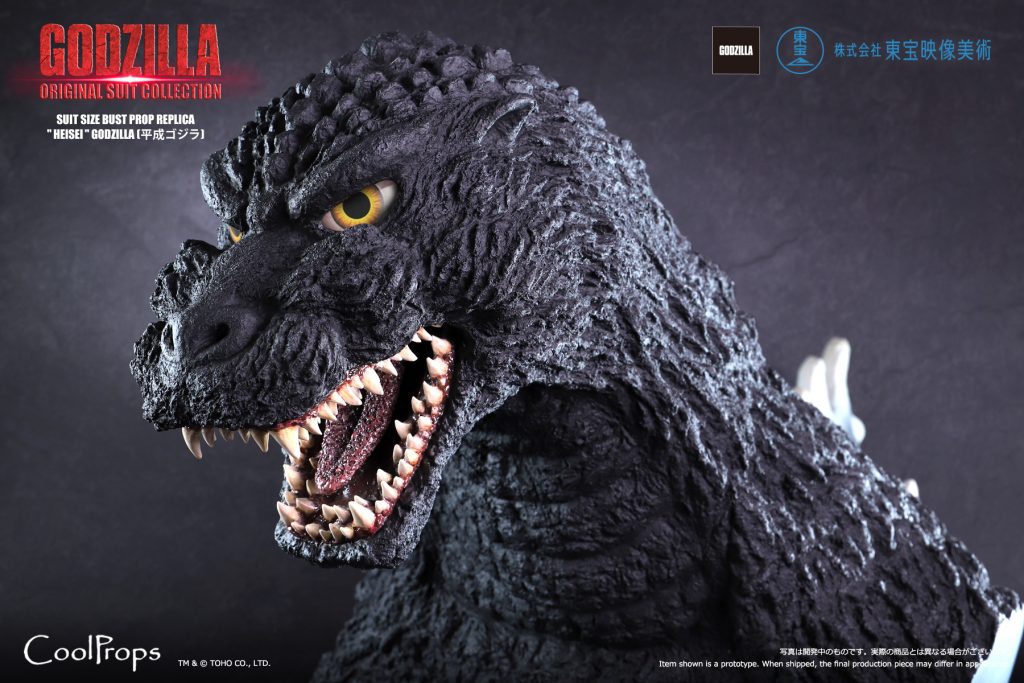 Starting February 20, 2022, the suit-sized bust of “Heisei” Godzilla, developed by CoolProps and TOHO EIZO BIJUTSU, will be available for pre-order worldwide. The bust model prop replica will be limited to 100 pieces.

On November 3, 1954, Godzilla made its first appearance in TOHO’s “Godzilla,” a classic monster movie widely regarded as a masterpiece. Since then, the King of the Monsters has become a pop culture legend across more than 35 films and TV shows, which have spawned thousands of exciting consumer products and experiences across the globe. More than 67 years later, the fan-favorite kaiju continues to be loved by fans of all ages.

To create the “Heisei” Godzilla prop replica, TOHO EIZO BIJUTSU and CoolProps carefully crafted the mold by using recasts and 3D scans of the original suit used for filming the “Heisei” Godzilla series. This powerful figure includes an independent logo plate, allowing the bust to be displayed to be seen from any direction.

Godzilla, the King of Kaiju, has carved its name into the history of film not only in Japan, but around the world. With the suit size bust prop replica “Heisei” Godzilla, you can add the excitement of the movie to your collection!

See below for more product information. This item can be pre-ordered from CoolProps’ official website:
https://www.coolprops.com/godzilla-original-suit-collection_en/

Item shown is a prototype. When shipped, the final production piece may differ in appearance.

CoolProps is a prop replica production and sales company. CoolProps produces many high quality replicas of props used in movies, Tokusatsu.
Monster Hunter and Ultraman series are now available in a wide range of scales such as life-size, maquette, statue, etc.
Recently, we have also been cooperating in prop production for Japanese films.
www.coolprops.com/english

Toho Studios, the biggest film studio in Japan, has produced various works, including TV programs, commercial films, as well as motion pictures for 90 years. Based in this prominent studio, TOHO EIZO BIJUTSU Co., Ltd. creates art and moving images. In recent years, we have been performing a unique role in diverse scenic design and production, leveraging our expertise developed in the world of numerous pictures, such as historical dramas and special effects films represented by Godzilla series.