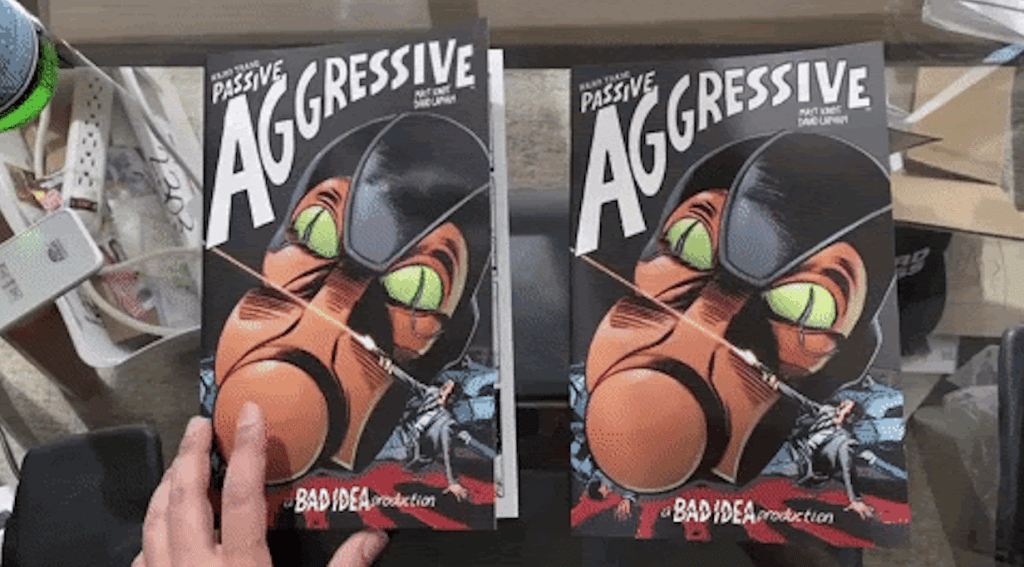 What a day! HERO TRADE: PASSIVE/AGGRESSIVE is actually TWO books.Stores only received copies of one or the other. And BAD IDEA managed to keep this whole shebang a secret the entire time! What’s more, you lucky FINAL FIVE pre-order sticker holders get direct access to a second copy.

Let’s unpack all that with this handy-dandy HERO TRADE: PASSIVE/AGGRESSIVE FAQ:

Wait, the story pages are completely different?
Yes, both stories take place in the Hero Trade world and both are connected but each is a stand alone story. When read together they unveil both sides of the larger story. A kind of comics Rashomon.

What are the two stories about?
HERO TRADE: AGGRESSIVE introduces us to the brutal vigilante known as The Watch. He’s been hacked and his bank account’s been drained. Now he’s headed to Russia to exact Justice, and justice will be measured in broken bones and gallons of blood.

HERO TRADE: PASSIVE is about a Russian hacker forced by his criminal overlords to spend his days committing cyber theft. He plans his escape by stealing the fortune of a billionaire playboy who secretly patrols the streets as The Watch.

How did BAD IDEA determine which stores got which books?
Domestically by state and, internationally, by country. Domestically, every store in the same state recieved the same book.

There must be an easier way!
There is!

Would that help?
If you have a FINAL FIVE pre-order sticker you can redeem, from BAD IDEA, one copy of the HERO TRADE: PASSIVE/AGGRESSIVE book you are missing. Also, mucho bragging rights!

How do I redeem my FINAL FIVE pre-order sticker?
Simply send us the sticker, a check or money order for $7.99 to cover shipping and handling ($19.99 if you are international) and the following information:

– Full Name
– Full Address (this is where we will send your comic)
– Whether you want a copy of HERO TRADE: PASSIVE or HERO TRADE: AGGRESSIVE
– E-mail address
– Phone number

How long do I have to redeem my FINAL FIVE pre-order sticker?
All redemptions must be postmarked by or before Wednesday, August 25th. That’s one week.

Who should I make the check out to?
Checks should be made payable to “Cincinnati Kid LLC”

I’ve always wondered, why did you legally name your company Cincinnati Kid?
Answering that would consequently reveal the biggest secret in all of BAD IDEA. The supermassive black hole of an idea that BAD IDEA orbits. One so closely guarded that some say no one can be told what the Cincinnati Kid is. You have to see it for yourself…or read the press release in a couple months.

What about the First Customer Pins?
We’ll be revealing all the glorious and evil details about the secret gifts they may bestow on Wednesday, August 25th. The last day to make sure your FINAL FIVE pre-order sticker redemption is postmarked. Total coincidence. Don’t read into it.

Is there anything else I should know?
Yes, be vigilant when providing your contact details. We will not be chasing redemptees if there are errors or omissions. Make sure to provide your full address including your street address, your apartment, suite, unit, building, floor etc., your city, state, zip and country.

Wanna get in while the gettin’s good with Bad Idea?  You simply have to visit a Bad Idea “Destination Store” — one of the 200 and counting comic shops around the world that have joined our independent network of direct-distribution retail partners — to pick up all the glorious BAD IDEA books every first Wednesday of the month. (Or pre-order in advance to make sure you secure your copy.)

We’ve made it even easier, too. To locate a Bad Idea retailer near you and then pre-order any and every Bad Idea title, simply click here and fill out the little form.

For more information, visit Bad Idea online at BadIdeaCorp.com, Facebook, Twitter, and Instagram, or just mash the screen with your palm and do all four simultaneously.