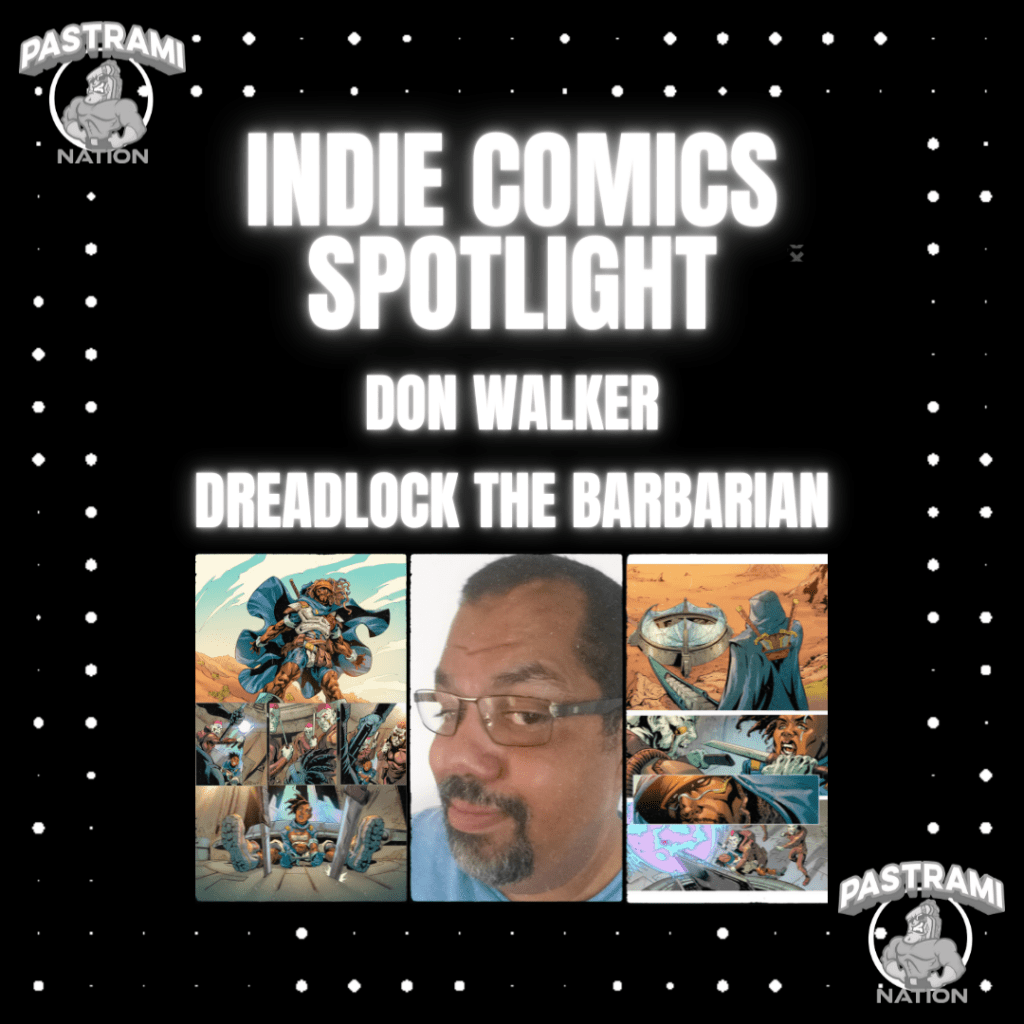 Welcome to Pastrami Nation’s Indie Comics Spotlight! We hope to help spread the word of amazing independent works with our comics and creator spotlights! With this installment, we shine the spotlight on Don Walker and his current Kickstarter project, Dreadlock the Barbarian!

Fun fact, when I was a teenager, I went to a comic shop out here in the High Desert regularly. I purchased a comic called ‘Creature’ from the shelves. It turns out the person working at the comic shop that day was also the person who created Creature- Don Walker. It is cool to reconnect after all these years and see the amazing project Don has with Dreadlock the Barbarian.

Don Walker: “I’m Don Walker, and I’m forty-seven, a husband to a wonderful woman and proud Dad of a thirteen-year-old daughter. My family and I live in Southern California, and I make comics (and sometimes movies). I self-publish under my DORK EMPIRE INK banner. My newest project is Dreadlock the Barbarian #0. A 24 pg, full color, swashbuckling cyberpunk wester, one-shot which is live now on Kickstarter. Dreadlock is al the ‘brother’ book/ somewhat spin-off of a previously published one-shot, Reaper Corps. Dork Empire Ink is a shared universe split in two ‘eras.’ Modern Day, with my book Agent Wild and Future, featuring Reaper Corps and now, Dreadlock. As I publish more books, the reader will see how events of the modern-day books create the future era of books. There’s definitely a long-form plan.

Don Walker: “My gateway into comics was Star Wars episode 4, A New Hope, which I saw with my Dad at a drive-in theater when I was five years old. I immediately started reading the Marvel comic series. The movie made me a sci-fi fan, and my comic reading leaned sci-fi heavily. From Star Wars, I’d migrate to The Marvel Micronauts series. As I got older, I discovered Spider-Man, Rom Spaceknight, and eventually, X-MEN, my all-time favorite book.”

“When I was around eight, I got my first copy of ‘How to Draw Comics The Marvel Ways.’ That book still stands up, by the way. But that was the book that got me started on the ‘how’ to do it, and I’d made my own comics (or zines as they were called back in the 60’s) ever since. In 1988, when I was fifteen, I had a subscription to a comic industry/entertainment newspaper called ‘The Comics Buyer’s Guide.’ There were often ads looking for comic creators to collaborate with. I happened to answer one, and crazy enough, it was from a writer my age. Fifteen! I’m not big on ‘Fate,’ but you know, meet that guy was fantastic at that time because we were both young, energetic, and hungry to make comics. So we were putting together an anthology called ‘Profolio,’ and I would end up headlining and doing the cover for the first issue with a character I called ‘Metamorph.'”

“Months later, I sent samples to AC Comics. About a year later, they sent me a letter asking me to take the samples and make a full-length issue (20 pages) and offered me $20 a page (a fortune for a sixteen-year-old). They even sent me a contract. I did the work, even had to redraw the sample pages because I’d erased to use the paper to draw more samples, lol. I turned the job in and received my check and a nice letter letting me know they weren’t going to publish the book. That was a bit heartbreaking, but that the check bought me so many comics and toys. So, I was OK.”

“In 1997, I was working in a comic shop, and the itch for making comics hit me again, this time for good. I ended up dusting of ‘The Metamorph’ character and pitched a mini-series to the Antarctic Press. The book was renamed ‘Creature’ and saw two issues published in 1998. I’ve been making comics off and on ever since. Choosing to self-publish since 2013.”

“As a writer? Chris Claremont, John Byrne, Alan Moore and many others that as a youth I never thought much of (because I was all about the art) but now can’t remember.”

Don Walker: “That’s a tough one. At my age, forty-seven, I’m past the whole ‘I want to work for Marvel and DC’ phase. I still LOVE the Marvel version of ROM Spaceknight. If I had to guess one project…I’d say I’d like to do a mini-series of DC’s BLUE DEVIL, but the original version where he’s a stunt man stuck in an experimental bodysuit playing the villain of a cheesy B-movie. I loved that book.”

Don Walker: “I’m on Facebook  here. I’m on Instagram @don_spaceknight. You can find all of my self-published works at my company store at www.dorkempireink.bigcartel.com.

Be sure to check out and support Dreadlock the Barbarian at the link below!