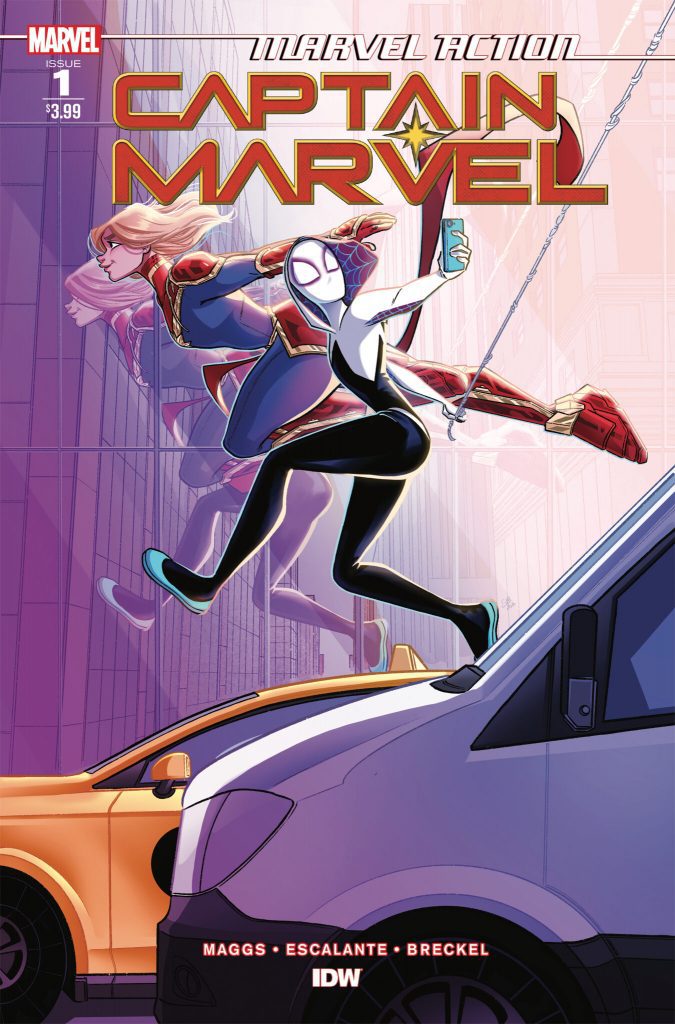 I was excited to pick up this new series from IDW! It just so happens to feature two of my favorite female Marvel characters: Captain Marvel and Ghost Spider!

Carol Danvers is on a nice stroll with her kitty Chewie or Chewbacca. There she runs into Gwen, The Ghost Spider. Suddenly two of her enemies show up: Doc Ock and Mysterio.  When Gwen stops captain, she’s confused. She spots hidden phones recording, and when she questions the “fake heroics,” Gwen explains the concept of ClikClok.

This issue was written by Sam Maggs, with art by Mario Del Pennino, inked by Isabel Escalante, and colored by Heather Breckel.  The art was very simplistic, but it had the desired effect. I found that I enjoyed Captain Marvel’s thoughts. They were hilarious due to their sassiness. The duo’s attempt to gain fame plays a part in today’s massive social media trends. What starts as a hilarious flash mob turns violent, resulting in the need for some serious crime-fighting.  The fake, patched-up costumes were also added comedy to the story, so younger readers are able to enjoy this issue. This a fun read for those who have not read prior issues or other backstories. This starting story is an excellent setup for the following issues.

I’m looking forward to seeing where this storyline goes!

It is available now at your local comic shop!