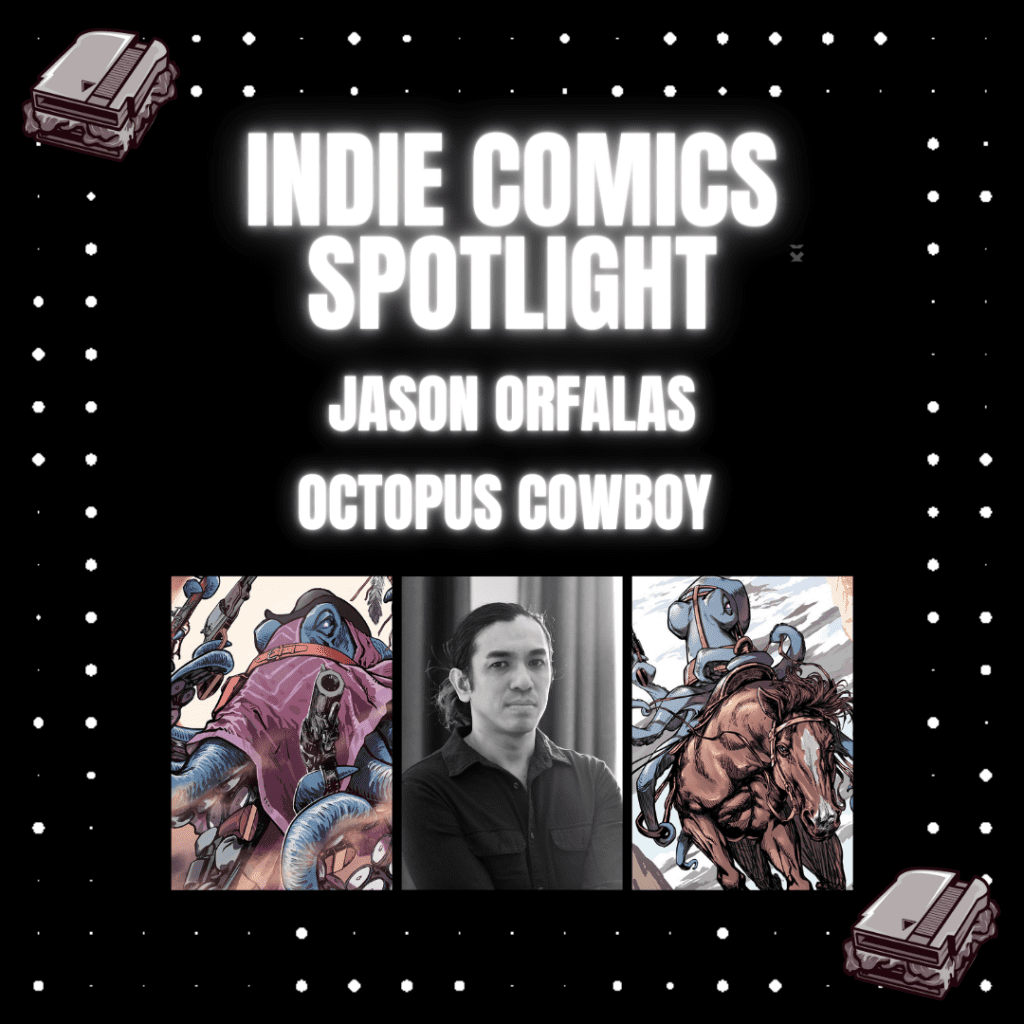 Welcome to Pastrami Nation’s Indie Comics Spotlight! We hope to help spread the word of amazing independent works with our comics and creator spotlights! With this installment, we shine the spotlight on Jason Orfalas and his project, Octopus Cowboy.

Jason Orfalas: “My name is Jason Orfalas, a self-taught artist, 26 year professional in comics, advertising, film, and the toy industry.”

“My current project is Octopus Cowboy Book 1, a 100 page graphic novel, now live on Indiegogo. Octopus Cowboy is Teenage Mutant Ninja Turtles meets Spaghetti Western, the story of a broken and disfigured ex-fighter who exploits animals for bloodsport. One of these animals happens to be a tough and resilient Octopus that defies his expectations and continues to win against all odds.”

Jason Orfalas: “As a teenager, I frequented Comic Book Conventions, mainly the New York Comic Con, where I would line up with other artists to get our portfolios evaluated by professionals in the industry. I received very positive feedback which encouraged me to pursue a career as a penciller. I started in Independent Comics briefly working with writer Alex Simmons. Then I moved on as a background artist for Billy Tucci before being given my own title. There, I met Tony Bedard, my editor at that time. He would eventually introduce me to DC Comics where I worked as a freelance penciller and inker. Tony and I would team up a third time at Image Comics as creators of Retro Rocket where I was also penciller, inker, colorist and letterer.”

Jason Orfalas: “The storytelling of Frank Miller, the way his panels slice through the page. The epic Lone Wolf and Cub by Kazuo Koike and Goseki Kojima. Akira, perfection in background art and composition by Katsuhiro Otomo. Will Eisner’s lively lines and dramatic shadows. The limitless Moebius. The incomparable Jack Kirby. My late professor Dennis O’Neil whose lessons in writing laid the foundation for my own work.”

Jason Orfalas: “I’m already on it. My dream project would be to see Octopus Cowboy through to its conclusion. I am currently in the earliest of stages, establishing characters and the world, all this is leading up to something big in the future and I hope I get it there.”

Jason Orfalas: “They can learn more about the campaign by going to Indiegogo and searching for Octopus Cowboy or directly thru this link: https://igg.me/at/octopuscowboy“

Do you want to be featured on a future Indie Comics Spotlight? Reach out to us via email: [email protected]pastramination.com.