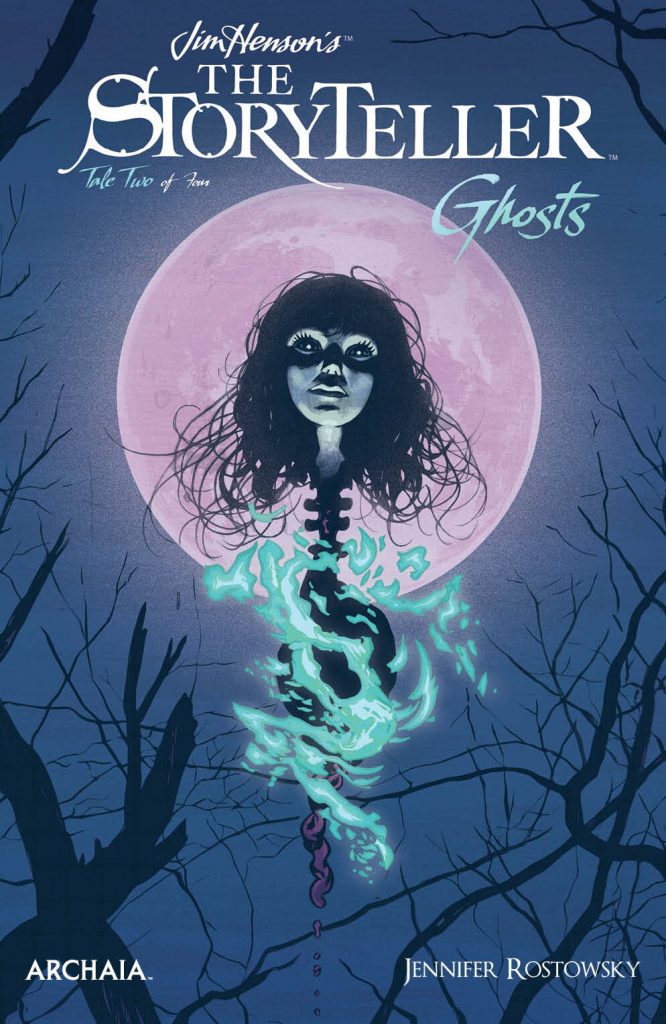 I haven’t read any of the BOOM! Studios entries in The Storyteller series, but my initial thoughts upon seeing the cover are hopeful of a spooky good time. Let’s take a look at Jim Henson’s The Storyteller: Ghosts #2, a comic by Jennifer Rostowsky, Jim Campbell, and a cover by Michael Walsh.

The comic book starts with an older man drying off his dog while having a conversation. The dog had gone out and played in the mud in a desperate attempt to get a treat. This reminded the old man of a story “..of great desperation and great punishment.”

We are taken to the scene of two lovers with descriptions about the rich, beautiful, and spoiled young woman named Molika. Continuing, we are shown that even the rich can have it cruel in their life. On the next page, we are shown Molika crying into someone’s lap, both angry and sad that Serey, the woman she loves, chose Nimol over her. In an attempt to help Molika through this hard time, the woman asks Serey and their relationship. Molika stands up, believing to be exactly Series type, she is determined to find a way to win her back.

Molika makes several attempts to win back Serey’s favor, such as feeding her exotic fruits and gifting her with shimmering pearls. Unfortunately, this was “…all for naught.” As Serey decides to pursue Nimol. Crying out in pain while in a dimly lit library, Molika finds The Book. It is at this point when her life changes permanently…

My initial expectations, as stated at the beginning of this, was that of things being spooky. While I can say they get gruesome and creepy in the second half of the book, I was not in the least spooked. To be fair, scary stories are best experienced at night in the dark and not in the middle of the day with the lights on and smooth jazz in the background, which is how I read the story. Still, I do not believe this to be the type of story to give you nightmares. Beyond that, it does have that creepy vibe to it. While the first half felt like typical teenage drama, it did not particularly interest me, the prospect of something scary kept me reading.

The artwork of this was fairly basic for my taste, but everyone felt as though they had realistic human proportions. The backgrounds were also pretty basic and generic looking. Everything fit together, though, and nothing felt as if it were out of place. They did manage to distinguish between everyone’s hair despite multiple people having the same hair color and their hair overlapping occasionally. Also, some of the panels were drawn round and curved as opposed to straight lines and 90-degree angles used on every comic book; I found this to be nice and fit in with the storytelling.

The story itself is nothing new. It is a fairly predictable teenage drama with a bit of witchcraft sprinkled in. They did change things up a bit from what all the expectations are, and not everything happens exactly how you expect it all the time. While the basic story and theme may not be new, their presentation is different from what I have seen in other stories. In the beginning, we are shown an older man and a talking dog, on my first read through it was not clear to me precisely what the purpose of these two was until I read the ending and then went back and reread the beginning.

Overall this comic book was made for a kind of comic book reader that is not me. I can respect what they are trying to do and the story they are trying to tell. It is a story of love and loss, and why it is important not to make desperate and rash decisions. There is very little violence and lots of drama and love. If you are the kind of reader that loves light horror and romantic drama, you might just like to give this a read.