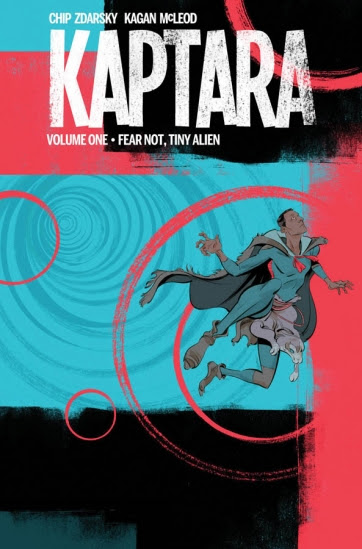 Bestselling writer Chip Zdarsky (SEX CRIMINALS, Howard the Duck) teams up with artist Kagan McLeod (Infinite Kung-Fu) for the laugh-out-loud romp, KAPTARA, VOL. 1: FEAR NOT, TINY ALIEN. This collects issues #1-5 into trade paperback and will be available in December.

A space expedition goes horribly wrong because if it didn’t there would be no story! Reluctant explorer Keith Kanga and his crew crash-land on KAPTARA, a world filled with danger and weird danger and dangerous weirdos! And if he can’t survive, then Earth, the place where YOU live, is doomed! Join Zdarsky and McLeod as they put the “fi” back into “sci-fi” and pretty much disregard the “sci” part completely in this epic story of punching and love!

KAPTARA, VOL. 1 (ISBN: 978-1-63215-557-3) hits comic book stores on Wednesday, December 23rd and bookstores on Tuesday, January 5th, and will be available for $9.99. It can be ordered by retailers from Diamond Book Distributors with Diamond Code AUG150535. It can be pre-ordered now on Amazon, Barnes & Noble, and IndieBound.
Praise for KAPTARA:

“Kaptara is an exciting and smart comic, one that hits all the right notes and utilizes a diverse cast of characters you can’t help but latch on to.” —IGN

“This is a topsy turvy acid trip where a Queen slightly resembles Miyazaki and a Prince similar to Conan on steroids are characters.” —Bloody Disgusting

“In just one page, motivational orb already seems poised to be the next Lying Cat.” —Multiversity Comics

“Strap on your space boots and get ready for Chip Zdarsky and Kagan McLeod to take you on a space trip… Expect the unexpected.” —ComicVine

“Funny and smart …. Zdarsky and McLeod work well to create a mix of striking action and wry humor.” —Paste Magazine

“Kagan McLeod’s work… has something for everyone. His characters are spindly and Steve Ditko-esque but also very detailed… From the very first page, he thrusts us into a world that we are sure is not our own and that we want to learn more about.” —Newsarama

“There are no rules with Zdarsky’s science-fiction fantasy Kaptara… a captivating, genre-bending narrative with lush, wildly imaginative visuals. It’s a very different book than Howard the Duck, but the two titles share a cheeky wit that reads as distinctly Zdarsky, establishing a writing voice that is as strong and confident as his work as an artist.” —Los Angeles Times’ HeroComplex