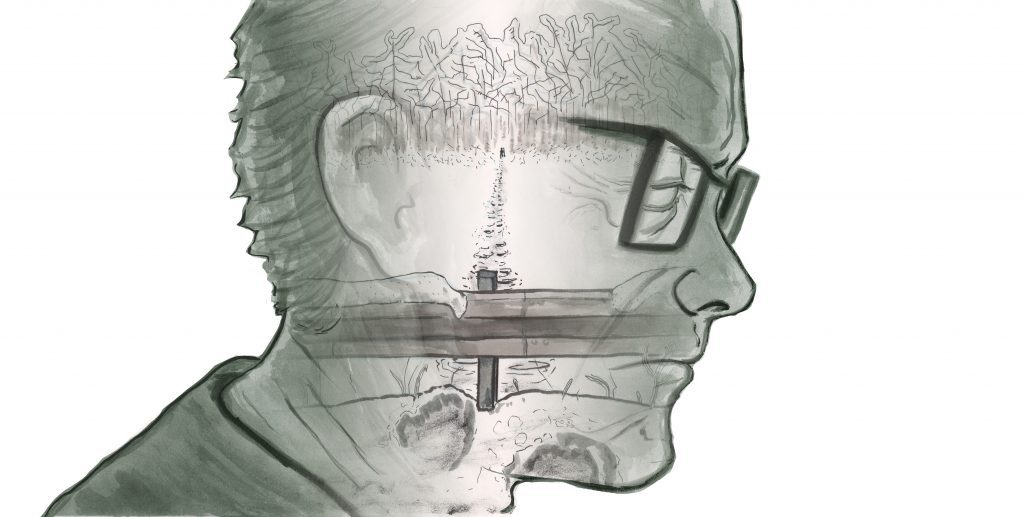 Kickstart the Mystery of FOG LINE

In the vein of the infamous podcast Serial, comes a cold case summoned by the airwaves, and Henry is feeling the pressure. Introducing Fog Line, an all-new 36-page noir comic told in a cinematic landscape format, written by creative mastermind and 2020 Mad Cave Studios talent hunt winner Mario Candelaria (Ashes, Tales from the Pandemic) with art by co-writer Andy Michael (Tales from the Pandemic, sLAsher), and letters by Matt Krotzer (It’s Your Funeral, Strayed, Retcon).

For the past 40 years, a retired truck driver named Henry has been haunted by a hit and run fatality he buried in the woods. Henry has learned to live with what he did over the years as he built a life and a family. But today he feels the walls finally closing in around him when he discovers a true crime podcast about the mysterious disappearance of his victim. Guilt, shame, and paranoia now plague Henry as he tumbles down the rabbit hole of this cold case in search of learning what exactly they know and if this could threaten to expose him.

What were once intrusive thoughts during quiet moments has now become active panic as Henry spirals while absorbing as much information on this case as possible to see if his day of reckoning has finally come.

“I have always been drawn to stories of quiet desperation and seemingly irredeemable broken characters,” said Writer, Mario Candelaria. “There’s something about haunting intrusive thoughts of past missteps and how they have a chokehold on the beholder’s day to day life that intrigues me, especially if it is a secret that just eats away at the protagonist. Fog Line is us taking this idea that no one ever truly gets away with something terrible they’ve done and slowly turning up the heat until it all boils over.”

“When Mario first asked me to read the script for Fog Line, I was blown away by its simple hook and intensely personal and private turmoil,” said Co-creator, Andy Michael. “As a creator, I’m drawn to stories where quiet internal conflicts boil over into a character’s reality. I think many of us can get hooked on true crime stories, but we haven’t seen what it’s like being the innominate subject of one.”

Will Henry get his? Find out by Kickstarting Fog Line before it’s too late. Edited by Hernán Guarderas (Crash & Troy and writer; Shadows in the Smoke, The Alpha Decision in Mañana Anthology).