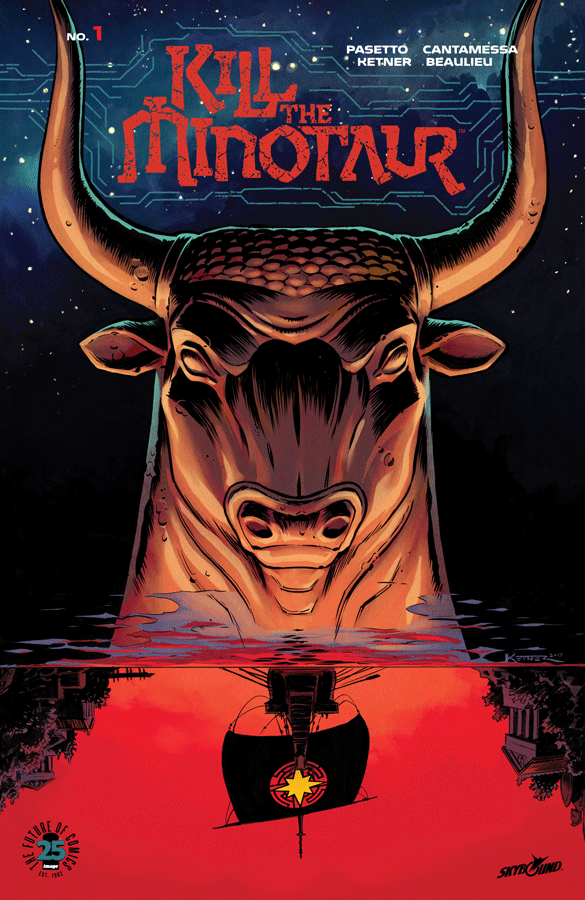 Kill the Minotaur #1 Review: Something Old, Something New

Kill the Minotaur dives horn deep into the world of Mythology

One of the best things about myths and legends is their ability to adapt over time, yet still remain true (enough) to the original story.  It seems, that time and time again, an author is able to put their own creative spin into a myth in order to retell it in their own words.  This is one of those tales.

With two very prominent names in geekdom responsible for this opus:  writer/actor/video game developer:  Chris Pasetto (known for his work on movies Air, and How I survived the Zombie Apocalypse & his work on Fallout:  Brotherhood of Steel, as well as acting in Sanitarium) AND writer/director/video game creator:  Christian Cantamessa (known for writing/directing movie Air, writing/game design on Red Dead Redemption and Manhunt, and his work on GTA: San Andreas) expectations for this story are high.

Their approach seems to lean more towards the casual side of Greek Mythology, however, there is still plenty of action as well as, unexpected deaths.  Being that this is one of my favorite topics, I loved how they kept most of the original myth in tact and threw in only, what I could describe as “Easter eggs,” here and there as far, as overall myth.

Now, the artwork is truly beautiful and tenderly detailed – exactly what you would expect to find on a Grecian urn circa 2017.  Lukas Ketner (known for Witch Doctor, Birthright, and his work on TWD, as well as Batman ‘66) has an incredible eye for human details, especially his uncanny ability to capture, and convey human emotion, even in the smallest of gestures.

It is true that there is not many a man, woman, or child, who has not heard the legend of the Labyrinth & the Minotaur, but I’m sure young and old alike can appreciate this new take on an old tale of King Minos, his madness, and the young Hero to be, Theseus.