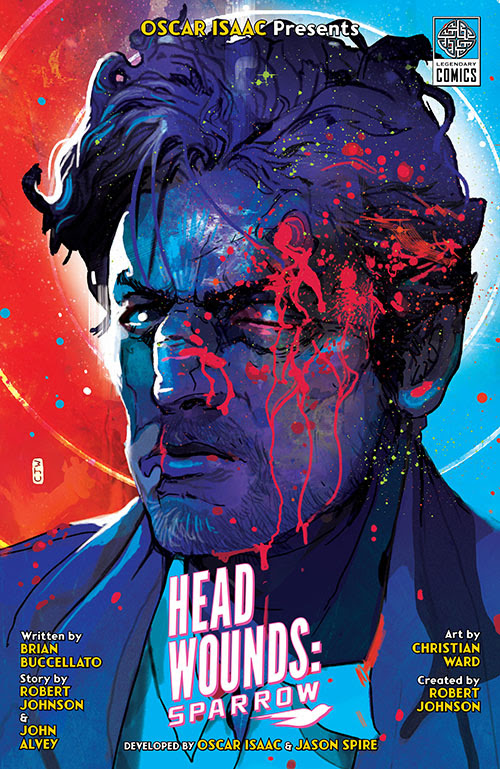 Legendary Comics, in collaboration with Rocketship Entertainment, announced today a new Kickstarter initiative to enhance the fan and reading experience for Head Wounds: Sparrow, a thrilling new original supernatural noir graphic novel presented by award-winning actor Oscar Isaac (Marvel’s Moon Knight; Legendary’s Dune).Additionally, Legendary Comics has revealed a motion graphic trailer narrated by Isaac that invites readers to take an inside look at the gritty world and Leo Guidry, the psychically damaged cop with empathy issues battling both demons and angels. Head Wounds: Sparrow, from creator Robert Johnson with story by John Alvey, is developed by Isaac and Jason Spire, and written by New York Times’ best-selling writer Brian Buccellato with art by Eisner winner Christian Ward. Limited editions of the graphic novel, along with exclusive items, are now available for pre-order on Kickstarter at: https://www.kickstarter.com/projects/legendarycomics/head-wounds-oscar-isaac/, with the book trade edition set for release on August 9, 2022.

Tangled up in the battle between Good and Evil, a crooked Louisiana detective with a higher purpose must psychically suffer the wounds of those he’s sworn to protect until he brings their assailants to justice. No one would call Leo a good person – much less a good cop. But when his best friend is shot in front of him, he wakes up with a hole in his own head that only he can see, and a host of mysterious strangers calling on him for action. Most people go about their daily lives ignoring or unable to see the divine battle for Good and Evil raging around them, but it has just become very real for Leo. As angels and demons vie for the fate of humanity, he must choose a side or risk seeing everyone and everything he has ever known destroyed as the stakes get higher and higher. As Leo sees the true faces of the people around him he must decide – will he do what’s best for him alone, or follow a higher purpose?

“I think there is something about this particular medium that allows such incredible world building and allows you to really express and juxtapose ideas that you can’t in other mediums,” said Isaac. “Marrying my love of comics with this specific form of storytelling, I am excited to bring Head Wounds: Sparrow to fans.”

“When Oscar, Jason, Robert and John brought us the story of Head Wounds: Sparrow, I was immediately hooked by the mixture of grounded ‘70s cinema themes and fantastical elements, but at its core this is a very personal and character driven story,” said Robert Napton, Senior Vice President and Publisher, Legendary Comics. “When Brian and Christian entered the mix, I knew we had put together the perfect team to bring Leo’s journey to life.”

“We are excited to continue our partnership with Legendary Comics and present the fans a bespoke content offering that harnesses the vision of the Head Wounds team,” said Tom Akel, Chief Executive Officer, Rocketship Entertainment.

Oscar Isaac is a critically acclaimed and award-winning actor, producer, and musician. In 2016, he earned a Golden Globe for his role on the HBO miniseries Show Me a Hero in the Best Actor in a Miniseries or Television Film category, as well as a Critics’ Choice nomination for Best Actor in a Movie or Miniseries. Two years prior, he scored an Independent Spirit Award for Best Male Lead and a Golden Globe nomination for his portrayal of the title character in the Coen Brothers’ film Inside Llewyn Davis.

Jason Spire, a lover of film, television, and theatre, is the founder and partner of Inspire Entertainment LTD., a talent management and production company with offices in New York and Los Angeles. Spire graduated from the University of California at Berkeley and learned the ropes at CAA (LA) and ICM (NY) before joining the Gersh Agency’s NY office. After years at an agency, Spire transitioned into a position that brought a more creative approach to building a person’s career. With some funding, he launched Inspire Entertainment, LTD., in order to offer a more holistic method to building and sustaining careers. He has gone on to produce successful projects alongside the company’s client roster such as MGM’s “Operation Finale;” an audience favorite for Netflix “Outside the Wire;” among many others.

Brian Buccellato is a #1 New York Times bestselling author out of the comic book universe, where he is best-known for his work on DC Comics’ titles The Flash, Batman, and Injustice. In 2017, he completed Universal Studios’ Feature Writer Program and was a member of Dan Lin’s 2019 inaugural TV development incubator at Rideback where he developed an original pilot for MRC.

Christian Ward is a comic book artist and writer. His books include the Eisner Award-nominated Invisible Kingdom, with G Willow Wilson; the cosmic space opera ODY-C, which he co-created with Matt Fraction; and the Eisner Award-winning Marvel comic Black Bolt, with Saladin Ahmed. In 2020, he also published his debut comic book as a writer: Machine Gun Wizards, with the artist Sami Kivelä.

Robert Johnson is addicted to words: stories, lyrics, poetry, comics, and screenplays; anything readable or writable. Boynton Beach, Florida is his birthplace. He currently resides in Boca Raton with Ona, the greatest person he’s ever known. He enjoys playing Make Believe with his best friend, John. Robert also tries to get lost in the woods whenever time and weather permit. He’s a cancer survivor and a decent drywall finisher.

John Alvey was born in Boynton Beach, Florida, where he still resides with his wife, Katherine. He is a carpenter, writer, and gamer. John’s a devourer of all mediums of Fantasy and Science Fiction. He’s honored to still be creating worlds with his best friend after three decades. John is elated to be a part of the Head Wounds: Sparrow team.