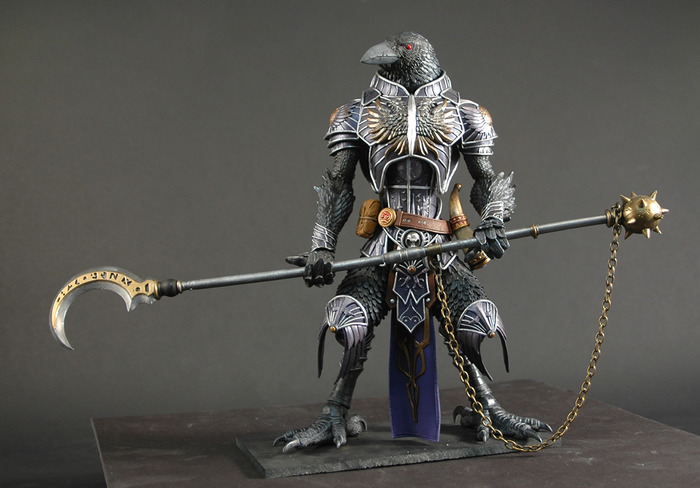 Get ready to fly with the birds.

The long sought after, long requested Raven action figure from the Four Horsemen’s Gothitropolis line is something collector’s are well aware of. The winner of the FANtastic Exclusive voting the Horsemen held a few years back, the project was once thought lost, until now. Now, thanks to Kickstarter, fans can get their hands on The Raven, as well as 11 other impressive armored birds (depending on stretch goals) with this Kickstarter project.

If you aren’t familiar with the Four Horsemen: they are the design team of sculptors behind DC Universe Classics, Masters of the Universe Classics, as well as so many lines of action figures: from Spawn and Todd Toys to nowadays. Their attention to detail and craftsmanship is amazing and unmatched. This is an amazing project, and will no doubt be funded. Now is the time to be a part of such a great fan driven project, I know I am.

Check out an official message from the Four Horsemen from their website below, which was posted a few days ago, and make sure to check out their Kickstarter project HERE.

We went live with our Gothitropolis Ravens Kickstarter Friday morning at 12am and thanks to the tremendous support by all of the action figure fans out there we actually reached 50% of our $64,000.00 base goal in under 24 hours!! At the time of this writing we’re nearing 75% fully funded at $44,554.00! We NEVER expected things to go that well with this project that quickly and we want to take this opportunity to thank ALL of you from the bottom of our hearts for giving us the support and inspiration (not to mention the money) to finally bring the Gothitropolis Ravens to life!

Things have started off with a bang and it looks as if we may actually reach our full base goal before the 32 day campaign is over, but we’ve still got a LONG way to go, especially if we want to get the other 6 figures and the other stretch goals into production and into your hands. Please continue to help and support us by simply spreading the word and by turning others who might not necessarily be aware of the project or even of action figures in general on to our Ravens Kickstarter campaign. Over the next couple weeks, we’re going to do all we can to promote the crap out of this thing and your help would be greatly appreciated.

We’ll be at the 2013 San Diego Comic Con at booth number 3345 (Action Figure Xpress’s booth) and all of the Ravens 2-up prototypes will be on display there (minus the top secret 12th variant stretch goal figure). Please be sure to stop by, have a look, and let us know what you think of these crazy feathered freaks.

We’re currently working on the logistics of putting in add-ons and we should be able to have that updated and rolling by the time SDCC ends. We’re in the process of installing a program that’ll help us to more easily keep track of all of the orders and add-ons and that’s going to take a few days. Please be patient and we hope to have this thing running MUCH more smoothly for you soon.

If you’re unfamiliar with our Gothitropolis Ravens Kickstarter campaign, or if you just haven’t jumped onboard yet, please follow this link which will take you directly to the project so you can check out all of the possible levels at which you can pledge: FOUR HORSEMEN GOTHITROPOLIS RAVENS KICKSTARTER

Once again, THANK YOU!! We know that we do still have a long way to go, but we’re on our way in a good way, and it’s all because of YOU!!