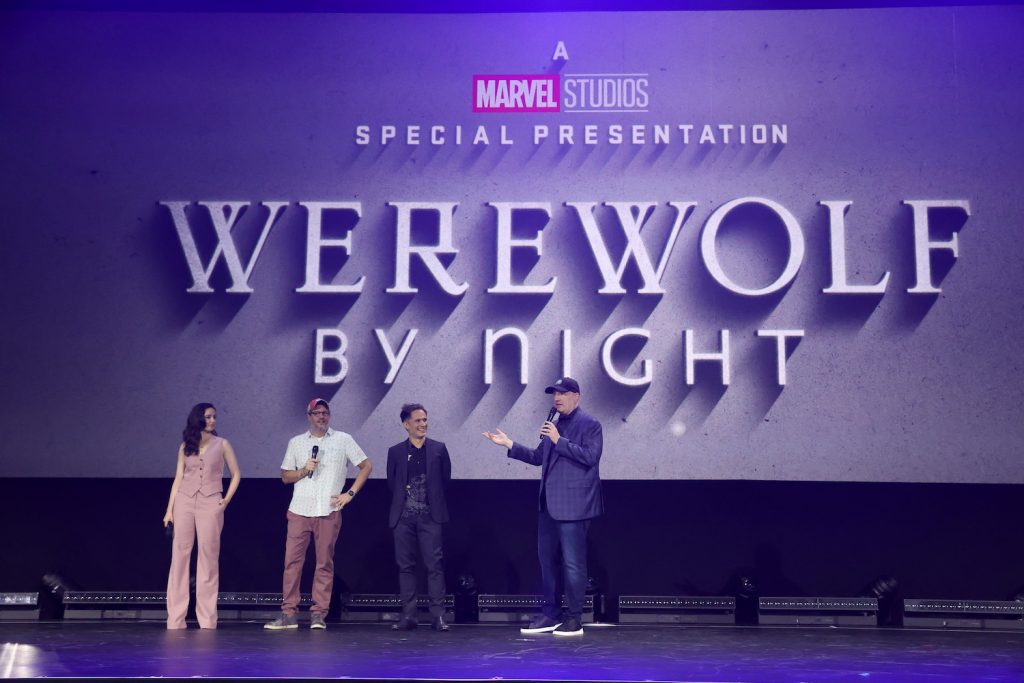 The Walt Disney Studios continued to fuel the fire ignited at yesterday’s showcase with a jam-packed presentation from the teams at Lucasfilm, Marvel Studios and 20th Century Studios this morning at the Anaheim Convention Center as part of D23 Expo 2022. Thousands of fans were among the first to hear new announcements, see never-before-seen footage and hear from the stars of the industry’s biggest streaming and theatrical titles slated for the coming months and beyond.

Alan Bergman, chairman, The Walt Disney Studios, welcomed a fired-up crowd to Hall D23. Bergman reflected on the 13-year history of D23 Expo and the evolution of the Studios group. “That [first] year, none of the iconic studios you’ll hear from today were part of the company,” he said. “It was just Disney Animation, Disney Live Action and Pixar. We announced the Marvel acquisition just before our first Expo in 2009. Then three years later, we added Lucasfilm, and in 2019, 20th Century Studios. I’ve been at Disney for 26 years, so it’s been incredibly exciting to welcome each of them to our Studio family. And like Disney and Pixar, each of these studios has a phenomenal legacy of storytelling.”

Joining Bergman to walk fans through the upcoming slate of films were studio executives Kathleen Kennedy, president of Lucasfilm; Kevin Feige, producer and president of Marvel Studios; and James Cameron, director of 20th Century Studios’ “Avatar: The Way of Water.” The showcase included the following highlights.

LUCASFILM
Bergman introduced Kathleen Kennedy, president of Lucasfilm, who guided the audience through the incredible lineup ahead. “As you can see, there is an immense amount of exciting new Star Wars storytelling to come from Lucasfilm. The quality, creativity, and variety these teams are bringing to Disney+ is absolutely remarkable, and I can’t wait for everyone to experience each of them.”

First up, “ANDOR” a 24-episode spy thriller that features one of the central characters in “Rogue One: A Star Wars Story.” Kennedy welcomed to the stage stars Genevieve O’Reilly, Kyle Soller, Adria Arjona and Cassian Andor himself, Diego Luna, as their character posters were unveiled. A highlight for all was the showing of the final trailer for the spy thriller filmed over two 12-episode seasons. The era featured in “Andor”—the five years before the events of “Rogue One”—is filled with danger, deception and intrigue where Cassian will embark on the path that is destined to turn him into a rebel hero. “Andor” presents Star Wars from a different perspective, focusing on everyday people whose lives are affected by the Empire. The decisions they make have real consequences, and the stakes for them—and the galaxy—couldn’t be higher. The series also stars Stellan Skarsgård, Forest Whitaker, Denise Gough, Fiona Shaw and Faye Marsay. Toby Haynes, Susanna White and Benjamin Caron direct specific episodes, and Kathleen Kennedy, Tony Gilroy, Sanne Wohlenberg, Diego Luna and Michelle Rejwan executive produce. Tony Gilroy is also the creator and showrunner. With action, adventure and suspense filmed against a cinematic landscape, the first three episodes of season 1 premiere exclusively on Disney+ on September 21.

Kennedy reflected on the world created in 1988 by George Lucas and Ron Howard that inspired the next step in the magical journey—a new live-action fantasy-adventure series “WILLOW,” from Lucasfilm and Imagine Entertainment. Kennedy introduced Warwick Davis (Willow Ufgood), who shared his excitement to return to Andowyne before being joined by series stars Joanne Whalley (Sorsha), Ruby Cruz (Kit), Erin Kellyman (Jade), Ellie Bamber (Dove), Dempsey Bryk (Airk), Amar Chadha-Patel (Boorman) and Tony Revolori (Graydon). To the delight of surprised fans, Christian Slater was also welcomed to stage as a member of the ensemble cast. The excitement continued when a brand-new trailer was shown. Set in a magical world where brownies, sorcerers, trolls and other mystical creatures flourish, “Willow” is the story of an unlikely group of heroes who set off on a dangerous quest, facing their inner demons and coming together to save their world. An epic period fantasy told with a modern sensibility and plenty of humor, heart, energy and vibrancy, “Willow” begins streaming on Disney+ Nov. 30.

Before Kennedy concluded the Lucasfilm presentation, she had one more title to share. “I couldn’t leave here without talking about one other project we’ve been hard at work on at Lucasfilm—Indiana Jones,” she said as the familiar theme played and the crowd erupted. “I’m thrilled to welcome to the stage our director, James Mangold. Mangold wowed the crowd with some new details along with a sizzle reel from the upcoming fifth installment of the immensely popular “INDIANA JONES” franchise, which opens in theaters June 30, 2023. Joining Kennedy and Mangold on stage was the one-and-only Harrison Ford alongside co-star and Emmy® winner Phoebe Waller-Bridge. Ford, who was a little emotional on stage, said, “Thank you for making these films such an incredible experience for all of us. I’m very proud to say that this one if fantastic, and [Waller-Bridge] is one of the reasons.

“Indiana Jones movies are about fantasy and mystery, but they’re also about heart,” continued the actor. “I’m really, really happy that we have a really human story to tell, as well as a movie that will kick your ass.”

MARVEL STUDIOS
Greeting fans at D23 Expo 2022, Kevin Feige said he’s been coming to D23 Expo for years—taking in all the performances the other studios in the Disney family bring to the stage. “I’ve always been a little jealous,” Feige admitted. “Why can’t we get our own musical number?” That kicked off a show-stopping performance of the buzzy fan-favorite “I Could Do This All Day” from the show-within-a-show “Rogers: The Musical” in last year’s Disney+ series “Hawkeye.” Bringing it to life live on stage were 22 performers, a six-piece live rhythm section and composer and conductor Marc Shaiman, who wrote the song for “Hawkeye.”

Feige returned to the stage, reviewing recent announcements including the Multiverse Saga—the conclusion of Phase 4, the Phase 5 slate and the Phase 6 titles that include “Fantastic Four” and two new Avengers films: “The Kang Dynasty” and “Secret Wars.”

Marvel Studios continues to create exciting and connected MCU storylines for Disney+, including:

The Marvel Cinematic Universe continues to thrill fans of the big screen, starting with the last film of Phase 4.

20TH CENTURY STUDIOS
Alan Bergman returned to the stage and was joined virtually by Academy Award®-winning producer/director James Cameron, currently in New Zealand, where he is still hard at work readying the release of the highly anticipated sequel to the biggest film of all time, “Avatar.” “AVATAR: THE WAY OF WATER,” which opens in theaters on Dec. 16, welcomes back to the big screen returning cast members Sam Worthington (Jake Sully), Zoe Saldaña (Neytiri), Sigourney Weaver (Kiri) and Stephen Lang (Colonel Miles Quaritch), who appeared on stage with producer Jon Landau. The crowd was treated to some fun anecdotes and exciting revelations about the new film before meeting the new-generation cast members Jamie Flatters (Neteyam), Jack Champion (Spider), Bailey Bass (Tsireya) and Trinity Jo-Li Bliss (Tuk). Set more than a decade after the events of the first film, “Avatar: The Way of Water” begins to tell the story of the Sully family, the trouble that follows them, the lengths they go to keep each other safe, the battles they fight to stay alive and the tragedies they endure. Before the show concluded, the lucky fans learned they’d be among the first to see scenes from “Avatar: The Way of Water”—right now. Each was invited to don a pair of Dolby 3D glasses—a Hall D23 first—to get fully immersed in the brand-new footage.

About Lucasfilm Ltd.:
Lucasfilm Ltd., a wholly owned subsidiary of The Walt Disney Company, is a global leader in film, television and digital entertainment. In addition to its feature film and series production, the company’s offerings include cutting-edge visual effects and audio post-production, digital animation, immersive storytelling, and the management of the global merchandising activities for its entertainment properties including the legendary STAR WARS and INDIANA JONES franchises. Lucasfilm Ltd. is headquartered in northern California. Lucasfilm, the Lucasfilm logo, STAR WARS and related properties are trademarks and/or copyrights, in the United States and other countries, of Lucasfilm Ltd. and/or its affiliates. © & TM 2022 Lucasfilm Ltd. All rights reserved.

About Marvel Studios:
Marvel Studios produces world-class filmed entertainment based on characters and stories from across the iconic Marvel comic book empire. Marvel Studios is home to the Marvel Cinematic Universe (MCU), and unprecedented interconnected collection of films that began in 2008 with “Iron Man” and includes “Captain America,” “Thor,” “Guardians of the Galaxy,” “Ant-Man” and the “Avengers” series as well as “The Incredible Hulk,” “Doctor Strange,” Spider-Man: Homecoming,” Black Panther” and “Captain Marvel,” to name a few. The MCU continues to expand with Marvel Studios’ slate of series, including “WandaVision,” “The Falcon and The Winter Soldier” and “Loki.” Marvel Studios also launched its first animated series, “What If…?” that reimagines famous events from the films in unexpected ways.

About 20th Century Studios:
20th Century Studios is an Academy Award®-winning producer of feature films for both theatrical and streaming release. It is home to such iconic  franchises as “Avatar,” “Alien,” “Planet of the Apes,” “Predator,” “Die Hard” and “Kingsman” and creator of hit films including “Bohemian Rhapsody,” “The Greatest Showman,” “The Martian,” and “Ford v Ferrari” and “Free Guy.” It also launched the successful “Deadpool” and “X-Men” film series and recent Oscar®-winner “West Side Story.” Upcoming releases include the “Avatar” sequel “Avatar: The Way of the Water,” and the newest film from filmmaker David O. Russell, “Amsterdam.” Previously known as 20th Century Fox prior to becoming a part of The Walt Disney Company, 20th Century Studios is recognized for its incredible 80-year legacy. It is the studio that brought the world the first six “Star Wars” films, in addition to standouts from across the decades, including “Miracle on 34th Street,” “All About Eve,” “The King and I,” “The Sound of Music,” “Butch Cassidy and the Sundance Kid,” “The Princess Bride,” “The Abyss,” “Edward Scissorhands,” “Home Alone,” “My Cousin Vinny,” “Speed,” “Cast Away,” “Moulin Rouge!,” “Minority Report,” “Gone Girl” and “The Revenant.”

About Disney+:
Disney+ is the dedicated streaming home for movies and shows from Disney, Pixar, Marvel, Star Wars, and National Geographic, along with The Simpsons and much more. In select international markets, it also includes the new general entertainment content brand, Star. The flagship direct-to-consumer streaming service from The Walt Disney Company, Disney+ is part of the Disney Media & Entertainment Distribution segment. The service offers commercial-free streaming alongside an ever-growing collection of exclusive originals, including feature-length films, documentaries, live-action and animated series, and short-form content. With unprecedented access to Disney’s long history of incredible film and television entertainment, Disney+ is also the exclusive streaming home for the newest releases from The Walt Disney Studios. Disney+ is available as a standalone streaming service or as part of The Disney Bundle that gives subscribers access to Disney+, Hulu, and ESPN+. For more, visit disneyplus.com, or find the Disney+ app on most mobile and connected TV devices.

About D23:
The name “D23” pays homage to the exciting journey that began in 1923 when Walt Disney opened his first studio in Hollywood. D23 is the first official club for fans in Disney’s 90-plus-year history. It gives its members a greater connection to the entire world of Disney by placing them in the middle of the magic through its quarterly publication, Disney twenty-three; a rich website at D23.com with members-only content; member-exclusive discounts; and special events for D23 Members throughout the year. Fans can purchase an individual plan ($99.99/year for one Gold Membership) or a duo plan ($129.99/year for two Gold Memberships) at D23.com. To keep up with all the latest D23 news and events, follow DisneyD23 on Twitter, Facebook, Instagram, and YouTube.