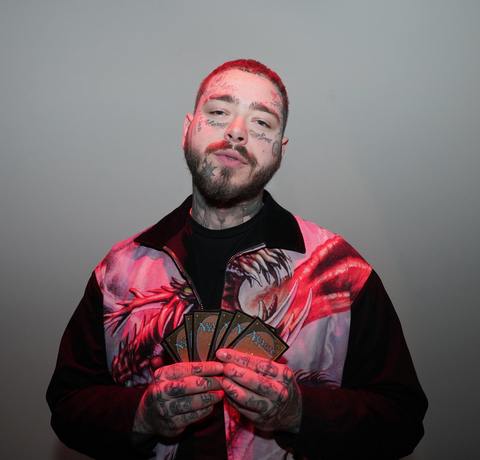 Magic: The Gathering and Post Malone Team Up for a Year-Long Celebration of Making Friday Night Magic

Wizards of the Coast, a division of Hasbro, Inc. (NASDAQ: HAS), today announced a collaboration between Grammy-nominated recording artist Post Malone and their popular gaming brand Magic: The Gathering. The partnership will kickoff with the return of Friday Night Magic (FNM), a global play program celebrated by millions of players across more than 8,000 stores worldwide every week.

Magic’s return to stores comes on the heels of the game’s biggest year ever. With a 25-year history, more than 50 million fans are gearing up for a jam-packed 2022 featuring new partnerships, bigger online experiences, and even more ways to celebrate the game they love.

“You’d be hard-pressed to find a bigger fan of Magic: The Gathering than Post Malone,” said Nathan Stewart, Head of Franchise Marketing for Wizards of the Coast. “As a fan for years, he knows just how much Friday Night Magic means to players. We’re thrilled to collaborate with Posty in ways that will allow his signature style, talent and love of the game to combine in ways fans will never forget.”

“I’m obsessed with Magic: The Gathering. This is really a dream come true,” said Post Malone. “We’ll be doing some cool stuff so keep an eye out.”

Wizards of the Coast, a subsidiary of Hasbro, Inc., is an award-winning developer and publisher of tabletop and digital games that ignite a sense of adventure in passionate players around the globe. Best known for publishing groundbreaking fantasy franchises, MAGIC: THE GATHERING® and DUNGEONS & DRAGONS®, Wizards is dedicated to bringing together world-class talent to create unforgettable play experiences at its headquarters in Washington and studios in Austin and Montreal. Learn more at www.wizards.com.

Post Malone stirs a mix of genres into his own sonic sound that’s both intoxicating and invigorating. His RIAA 3x Platinum certified debut album, Stoney, led the genre-bending Dallas, TX artist to his first Top 10 Billboard 200 and first #1 R&B/Hip-Hop Album while being the “#1 Debut Hip-Hop Artist of 2016”. 2019 has been packed with one milestone and achievement after another for Post Malone. “Congratulations” has been certified Diamond by the RIAA. According to Nielsen Music, his second full-length, Beerbongs & Bentleys, emerges on the Mid-Year Top 10 Albums (Based on Overall Equivalent Album Units) and he earns two entries on the Mid-Year Top 10 Selling Digital Songs, namely “Sunflower (Spider-Man: Into the Spider-Verse)” with Swae Lee at #3 and “wow.” at #6. “Sunflower” also lands at #2 among the Top 10 On-Demand Song Streams (Audio and Video Combined) and Mid-Year Top 10 On-Demand Audio Streams as “wow” sits at #7 on both charts.

Hasbro (NASDAQ: HAS) is a global play and entertainment company committed to Creating the World’s Best Play and Entertainment Experiences. From toys, games and consumer products to television, movies, digital gaming, live action, music, and virtual reality experiences, Hasbro connects to global audiences by bringing to life great innovations, stories and brands across established and inventive platforms. Hasbro’s iconic brands include NERF, MAGIC: THE GATHERING, MY LITTLE PONY, TRANSFORMERS, PLAY-DOH, MONOPOLY, BABY ALIVE, POWER RANGERS, PEPPA PIG and PJ MASKS as well as premier partner brands. Through its global entertainment studio eOne, Hasbro is building its brands globally through great storytelling and content on all screens. Hasbro is committed to making the world a better place for children and their families through corporate social responsibility and philanthropy. Hasbro ranked No. 13 on the 2019 100 Best Corporate Citizens list by CR Magazine and has been named one of the World’s Most Ethical Companies® by Ethisphere Institute for the past eight years. Learn more at www.hasbro.com, and follow us on Twitter (@Hasbro) and Instagram (@Hasbro).

Magic: The Gathering’s compelling characters, fantastic worlds, and deep strategic gameplay have entertained and delighted fans for more than 25 years. Fans can experience Magic through the tabletop trading card game, the digital game Magic: The Gathering Arena, a New York Times bestselling novel, and a critically acclaimed comic book series. With more than 50 million fans to date, Magic is a worldwide phenomenon published in 11 languages in more than 70 countries.

Nolan Smith
0
Tags :
Magic: The Gathering and Post Malone Team Up for a Year-Long Celebration of Making Friday Night Magic