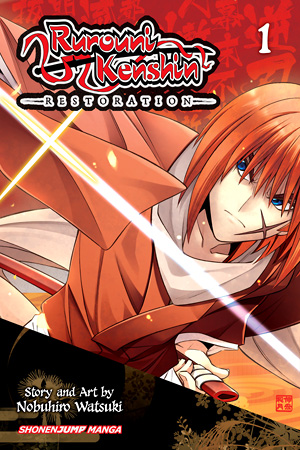 The Rurouni Kenshin franchise has been around for some time now. Fans of anime and manga know the tales of the legendary Battosai the Man Slayer, set in the Meiji Era in feudal Japan.  If you don’t, or if you have been missing out on your sword slashing fix, then Rurouni Kenshin: Restoration is for you.

With a slightly different version of the story, the essence remains the same. Before the Meiji Restoration period in Japan, a lone swordsman cut a path of carnage and violence wherever he journeyed to. He was known as Hitokiri Battosai, the Man Slayer. But we are now in a new age, and with it, a new man. Giving up his life of violence, the swordsman takes on the new name of Himura Kenshin, and devotes his life to helping those in need. That’s the story behind the protagonist of the book, but we all know that a boring life of no violence is no life for a manga, am I right?

This first volume, from the original creator of Rurouni Kenshin, Nobuhiro Watsuki, introduces readers once again to Kenshin, his trademark reverse bladed sword, as well as many of the reoccurring cast. This includes the apple of Kenshin’s eye, Kamiya Kaoru, the brash child Yahiko, and more. We also get glimpses into the shadows of Kenshin’s past, including the fierce police swordsman, Saito Hajime. The artwork is stunning in all of its stark, black and white glory. Fast paced and frantic, just as a Kenshin book should be. It sets the stage for what it sure to be another classic line of volumes following the wandering swordsman.

If you are not familiar with the franchise, then I cannot recommend this volume enough. It is the perfect jumping on point, as it sets up the world nicely, as well as all of the vivid characters in it. For someone who has read the past mangas and seen the anime, it may seem like treading familiar ground. However, I thoroughly enjoyed the volume, even after reading the past volumes and knowing the story lines. I give Rurouni Kenshin-Restoration Volume 1 a FOUR out of FIVE here at Pastrami Nation.