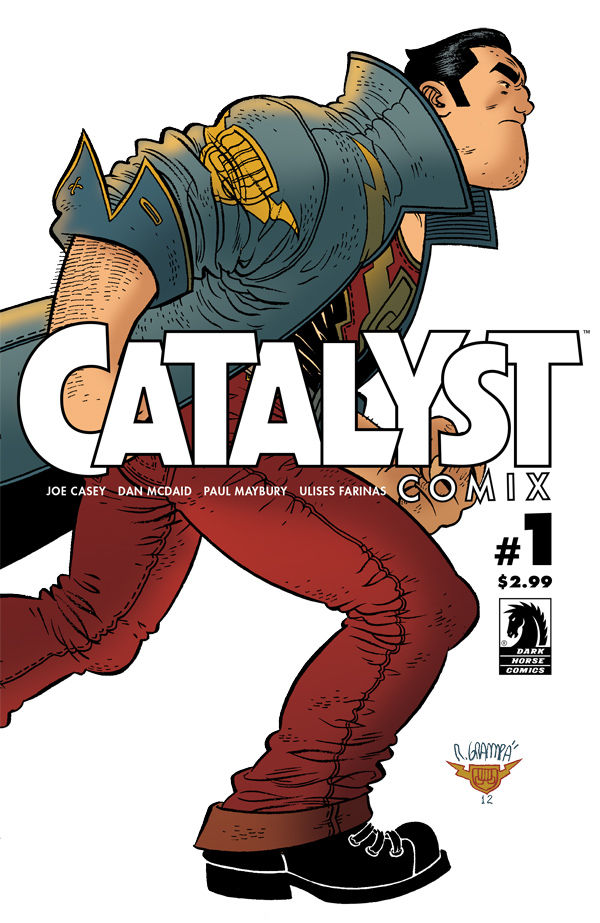 Back in the 90’s, there was an imprint called Comics’ Greatest World, and it bolstered quite an impressive line up. X, Ghost, Titan, Agents of Change: there was a plethora of heroes surviving in a shared world. But the 90’s ended, and so did many of the titles. In 2013, some of these characters have been brought back with Catalyst Comix, a serialized monthly anthology, written by industry favorite Joe Casey.

This first issue showcases three separate stories, but all set in the same world, with events tied into each of the stories. It’s December 21, 2012, and the world seems to be ending. But what can Frank Wells, the hero formerly known as Titan, do to stop it? That’s the first story, which is action packed, gives us some background on Frank, and leaves us wondering what’s next. This is, to me, the strongest story of the book, and rightfully so as it is the lead story.

The second one feature Amazing Grace, a heroine in deep space, who sees the end of the world from a different perspective. The third story is about the Agents of Change, or more like a coming together of the agents in an effort to, yes, you guessed it; stop the end of the world. The three stories are stitched together nicely, and it makes for the reader to have a cohesive outlook to the book as a whole.  Casey, who always has an off the wall feel to his writing, strikes gold once again with a hip, relevant book for these heroes of the 90’s.  The three artists that help visualize the story all do an exceptional job, all while staying distinct to their own stories.

I was excited for this book when the ads for it started rolling through. Now that it’s here, I cannot wait for issue #2. This looks to be another great series for Dark Horse, as it cast a new light and look on characters some may know nothing about. Well worth the price of admission, I give Catalyst Comix #1 a FOUR out of FIVE here at Pastrami Nation!