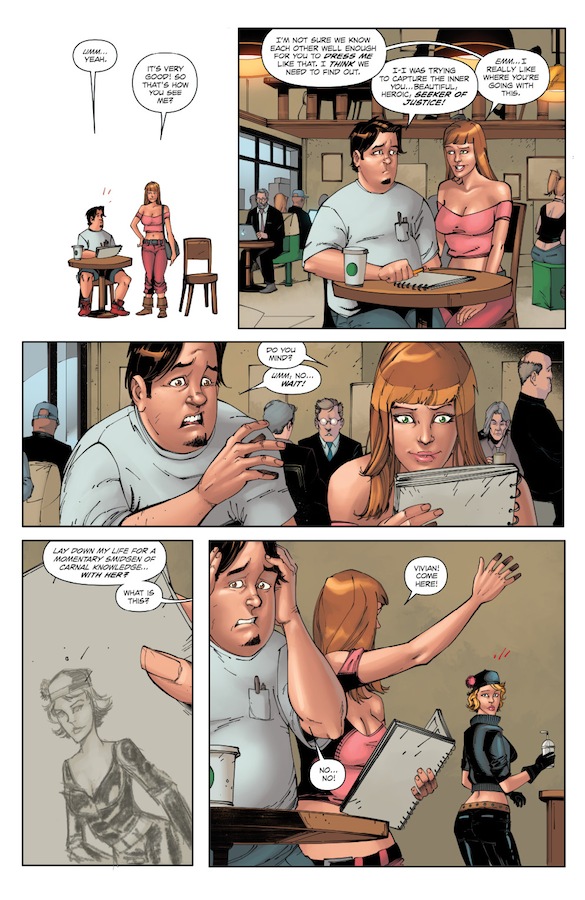 Willard Penn is a struggling comic book artist with an unexpected hit and a very unexpected problem. After Dark Hour, his comic about an unlucky-in-love superhero sells out, Willard is hit with a bad case of writer’s block — and his creation is refusing to sit still and wait for it to pass. Literally.

In REALITY CHECK, a new Image Comics miniseries by Glen Brunswick (NON-HUMANS, Jersey Gods) and Viktor Bogdanovic debuting in September, Dark Hour makes the leap from Willard’s page to the real world. His demand to his creator: Help him to find true love. Willard has problems other than finding Dark Hour’s perfect woman, though, because his comic’s archvillain, Devil-Inside, a homicidal maniac bent on causing havoc, has entered the real world as well.

The meta-fictional adventure is both a test of Willard’s creativity and a personal challenge, Brunswick revealed in an interview with Comic Book Resources.

“One of the side benefits of being forced to help Dark Hour hook up with a woman is it forces Willard to re-engage with the world as well,” he said, “so in that sense he’s helping himself to connect with other people instead of solely focusing on his creative endeavors. It causes Willard to reevaluate his life.”

In that interview, Brunswick praises his collaborator, artist Bogdanovic. “He handles the small moments of character expression with depth and certainty — you know exactly what the characters are thinking and he adds unexpected details that inform the characters as well.”

Interviews with Brunswick about REALITY CHECK have also run at Newsarama and PreviewsWorld.

REALITY CHECK #1 will be in stores on September 4 and can be pre-ordered now from the July issue of Previews (JUL130410).