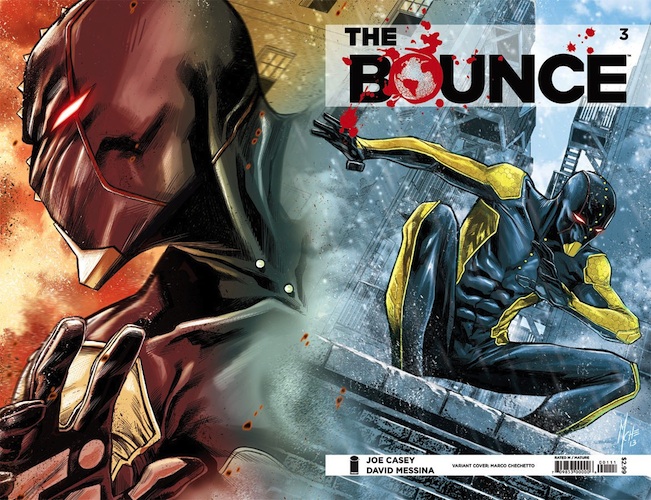 Joe Casey and David Messina dig deep in the third issue of their new series, The Bounce.

The story takes off at an, umm, awkward ending of issue two where Jasper and Terry catch each other with their pants down. Well not exactly, well one had a dress on, so kind of. The twist in this series so far is what keeps me interested; the touch of humor helps move along these huge issues to an agreeable compromise. That’s the best I can do with confessions of a drag queen. There was little action in this issue and that wasn’t a bad thing at all. There is actual substance in this series, so far the character development and human condition is so well put to together that the action is more of a plus than the staple of this story. Obviously, during the moment Jasper and Terry find that they have a lot more in coming than they ever knew. Through their secrets they find secrets and better support, like one holds the bong while the other lights it. Jasper admits that his mission to fight for the little guy is a direct result of him feeling ultimately responsible for Zander’s disappearance.

The man in the dark suit forwards his plan by unleashing a super human on the city. This mutha trucka means business, at least I think so: unfortunately all he speaks is Español . Let’s just say that Spanish is not my strong suit. The scene of discombobulating is an awesome example of how diversified the Bounce staff truly is. I will not go into any more detail so you can see for yourself.

As I mentioned earlier, this series has a very diversified team of talent and continues to bring a great story. The character development is familiar and in depth. These characters address real issues within themselves and others in a way that makes the story feel real. With artwork that rips through the pages, the Bounce team is truly right on. This issues storytelling and character development as well as the detailed artwork is a rarity in comics today and presents a story so well that I couldn’t give nothing less than a five on the Pastrami Nation Scale. Till next time Beiong!!!!!