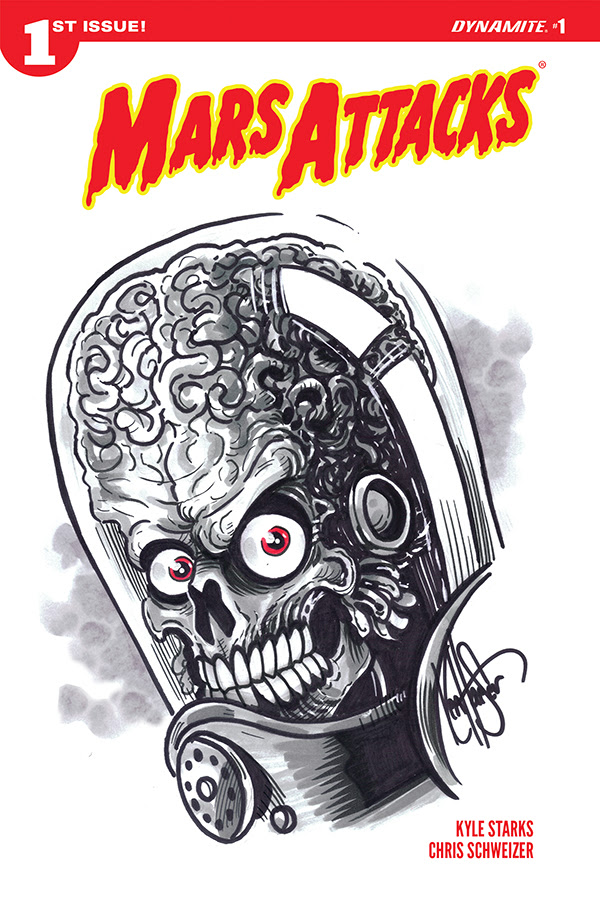 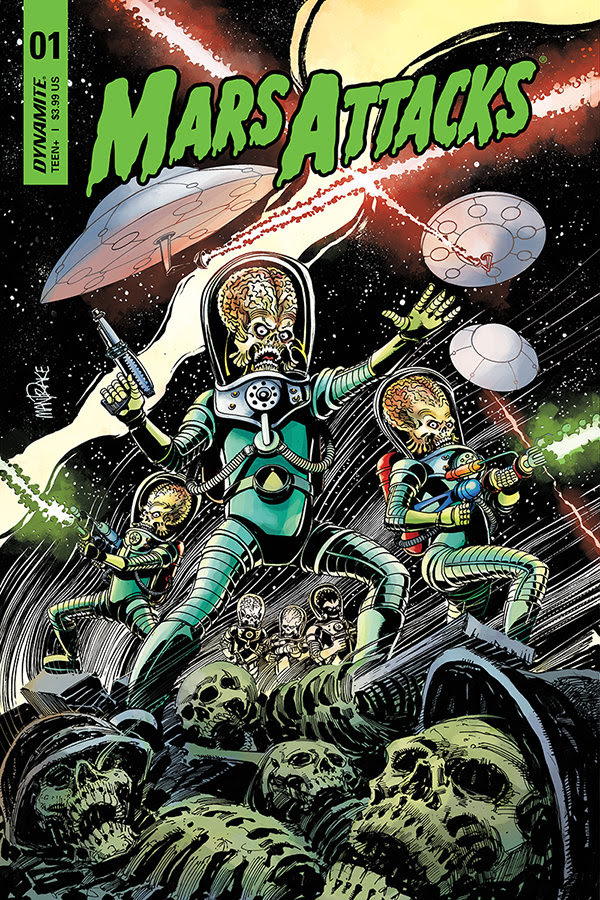 Dynamite Entertainment and Topps are ready to protect the world from those crazy green aliens once again as writer Kyle Starks (Rick and Morty, Rock Candy Mountain) and artist Chris Schweizer (The Creeps, Unbeatable Squirrel Girl) bring you the face melting experience of a lifetime with Mars Attacks! this October!

“Mars Attacks! is coming back to comic stands and I’m thrilled to be a part of it,” said writer Kyle Starks.  “I’ll be bringing my two-time Eisner nominated trademark humor and action to this totally awesome and classic franchise.”

In Mars Attacks! #1, Spencer hasn’t finished a dang thing in his life. So when he goes to visit his dad to see if maybe he can borrow some money, the last thing on his mind is global survival. Now Spencer and his father are on the run, trying to avoid being spaceray’d by a bunch of destruction happy Martians, heck-bent on zapping them dead!

“It gets even better.  We’ve got award-winning cartoonist Chris Schweizer for art duties and he’s going to hit a home run,” added Starks.  “Schweizer and Starks go together with Mars Attacks! as well as death rays and flying saucers.  This is going to be bonkers hilarious, bombastically over-the-top fun.”

“I’ve been waiting to see Dynamite’s take on Mars Attacks! for over a year and I’m so excited with what the creative team has done,” said Nick Barrucci, Dynamite CEO & Publisher.  “I’ve been a fan ever since the 1962 trading cards and our series really reflects the tone of the original.”

The debut issue of Mars Attacks! #1 delivers a wide selection of cover variants, providing fans and retailers a chance to collect the whole set! The cover artwork features the talents of Tom Mandrake (The Spectre), Ruairí Coleman (KISS/Army of Darkness), Eoin Marron (James Bond: The Body), Robert Hack (Dr. Who), and a special subscription cover drawn by Chris Schweizer (The Creeps), respectively.  A Blank Authentix Edition will be available as a variant for Mars Attacks! #1 featuring the same great story, but with a blank cover for fans to get their favorite artist to sketch on.  Additionally, a very special remarked edition by artist extraordinaire Ken Haeser will also be available!