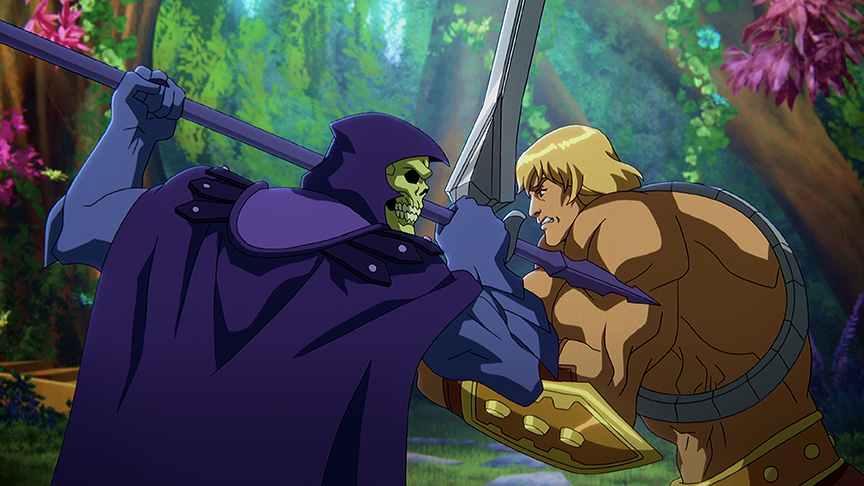 Mattel Television Gives Fans a Sneak Peek to the Upcoming Masters of the Universe: Revelation; Animated Series Premiering Globally on Netflix on July 23

He-Man is coming back strong this year, and to Netflix! Mattel released the news this week in an message from Rob David, Executive Producer of “Masters of the Universe: Revelation” & Vice President, Content Creative, Mattel Television.

In 1982, Mattel created a mighty new world of play, and like a flash of lightning it became an instant cultural phenomenon: Masters of the Universe™. It was a tale of warrior goddesses, savage henchmen, cosmic enforcers, lords of destruction, allies and enemies. And at the center of this mashup of sci-fi and fantasy was a heroic barbarian with a magic sword, trying to do right in the world. Masters of the Universe – through toys, television, comic books and more – resonated deeply with the children of the eighties who identified with its core message that everyone has the power to become the best version of themselves.

Created as a “love letter” to the fans who grew up with the franchise, produced by Mattel Television™ and premiering globally on July 23 on Netflix, Masters of the Universe: Revelation will feature:

The Continuation of the Classic Storyline –Masters of the Universe: Revelation is the first piece of episodic content from the franchise to be produced in nearly 20 years. To celebrate the fans who have waited so long for its return, it was important to us to honor the original storyline. Fans who followed the adventures of He-Man and his friends in the eighties will feel like they are picking up the story where the characters left off. In our first episode, a cataclysmic battle between He-Man and Skeletor leaves Eternia fractured and the Guardians of Grayskull scattered throughout the land. Now it’s up to Teela to reunite the broken band of heroes and ultimately prevent the end of the universe.

And just as the fans of the original have matured, so too has the world of Eternia. Masters of the Universe: Revelation features deeper themes, characterizations and harrowing battles than ever before, designed for the adult audience.

The Evolution of Fan-Favorite Characters – Fans will watch their favorite characters evolve over the course of the series. Prince Adam/He-Man, Teela, Evil-Lyn and even Orko will all be very different at the end than they are at the beginning as they battle it out for the fate of Eternia. Alliances will shift, destinies will be met, secrets will be revealed.

An Updated Look – We partnered with Powerhouse Animation to uphold the classic look that fans remember from the eighties while rendering it with greater detail, modern lighting and atmosphere. This Eternia is grounded and real, but also fantastically epic.

An All-Star Cast – The show features a kaleidoscope of heroes and villains voiced by an all-star cast – each with a unique and personal connection to the franchise. We are proud to present Mark Hamill as Skeletor, Lena Headey as Evil-Lyn, Chris Wood as Prince Adam/He-Man, and Sarah Michelle Gellar as Teela, to name a few. And we’re excited to showcase the return of a beloved voice from the original Filmation cartoon: Alan Oppenheimer, who famously voiced Skeletor in the eighties (as well as Man-At-Arms, Cringer and Mer-Man),and now brings his talents to Moss Man in Masters of the Universe: Revelation.

Universal Themes – Masters of the Universe: Revelation explores many of the themes from the eighties which are still relevant today, including the meaning behind He-Man’s famous call: “I have the power!” You wouldn’t know it to look at Prince Adam, but there’s something inside him, something truly strong and special, that – when unleashed – has the power to transform not just him, but the entire universe. And the real magic of Masters of the Universe is that this is true for each and every character in it, as well as for each and every one of us watching it. When we recognize the best version of ourselves, we ALL have the power!

I have been a fan of Masters of the Universe since I was a kid, when I first spotted a He-Man™ toy towering over all the other action figures in the toy store. Playing with my He-Man action figure awakened my imagination and it’s been a dream come true to have the privilege of helming the further development of He-Man’s narrative for Mattel. The love and nostalgia for He-Man runs deep in this team, from the creative execs and production crew at Mattel Television, to the writers, to the artisans at Powerhouse Animation, to our partners at Netflix and our showrunner, the iconic filmmaker Kevin Smith.

We hope that Masters of the Universe: Revelation reignites your childlike passion for the world of Eternia, just like making it did for ours. We all have the power!