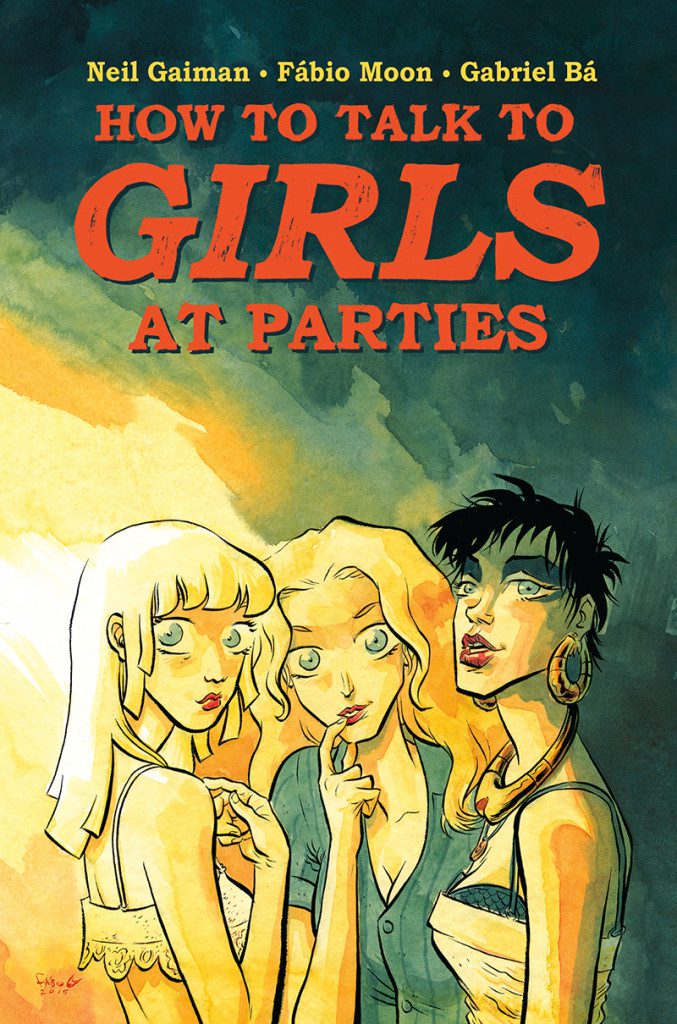 In June 2016, Dark Horse Books will be pleased to offer How to Talk to Girls at Parties, a brilliant new graphic novel adaptation of an award-winning short story from Neil Gaiman—one of the most celebrated authors of our time—by award-winning artists Fábio Moon and Gabriel Bá.

Now Moon and Bá are set to adapt the Gaiman story they were born to draw in a sumptuous graphic novel that is not to be missed.

“They have a storytelling aesthetic where [depicting] body language is everything. The story is all about what’s in the narrators’ heads, so it can be very hard to do that in comics. It’s incredibly enjoyable to write a story and see them make it real,” said Neil Gaiman in an exclusive interview with Publishers Weekly.

In How to Talk to Girls at Parties, two teenage boys are in for a tremendous shock when they crash a party where the girls are far more than they appear!

How to Talk to Girls at Parties is in stores June 15, 2016. Preorder your copy today at your local comic shop or through these fine retailers:

About Neil Gaiman
Neil Gaiman is the #1 New York Times bestselling author of more than twenty books, and is the recipient of numerous literary honors. Originally from England, he now lives in America.

About Fábio Moon and Gabriel Bá
Multiple Eisner Award winners Fábio and Gabriel were born in São Paulo in June 5th, 1976 and have, in one way or another, been telling stories ever since. Now, they tell stories doing comic books and graphic novels (which are essentially the same thing). They are Brazil’s very own WONDER TWINS.

About Dark Horse Comics
Founded in 1986 by Mike Richardson, Dark Horse Comics has proven to be a solid example of how integrity and innovation can help broaden a unique storytelling medium and establish a small, homegrown company as an industry giant. The company is known for the progressive and creator-friendly atmosphere it provides for writers and artists. In addition to publishing comics from top talent, such as Eric Powell, Mike Mignola, Geof Darrow, Brian Wood, Gail Simone, Stan Sakai, and Guillermo del Toro, and comics legends, such as Will Eisner, Milo Manara, Kazuo Koike, Neil Gaiman, and Frank Miller, Dark Horse has developed its own successful properties, such as The Mask, Ghost, X, and Barb Wire. Its successful line of comics, manga, and products based on popular properties includes Dragon Age, Buffy the Vampire Slayer, Aliens, Conan, Tomb Raider, Halo, The Witcher, Serenity, Game of Thrones, and Avatar: The Last Airbender. Today Dark Horse Comics is the largest independent comic book publisher in the US and is recognized as one of the world’s leading entertainment publishers.