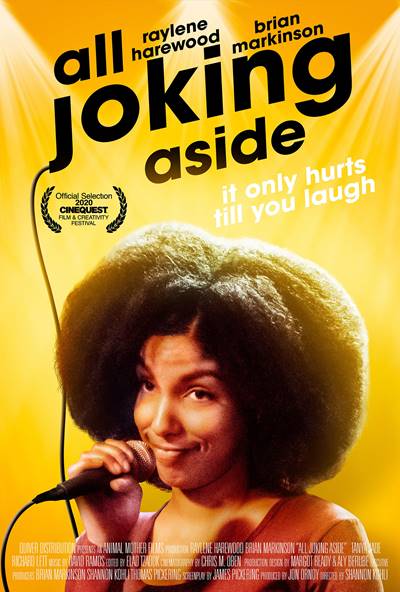 Movie Review: All Joking Aside

There seems to be a fascination with the world of stand up comedy and the lives of those who do it. It’s an interesting job that requires a lot of perseverance and a lot of guts to do. To me, it’s a terrifying prospect. Going up on stage night after night, spilling your soul and trying to be the funniest person in the room. That’s a lot of pressure, and about 80 percent of people I know would crack under it. But there are those that thrive in that environment, and All Joking Aside takes us into that world.

The story is about Charlene (Raylene Harwood), a young woman aspiring to be a stand-up comedian in the big city. Night after night, she goes up there and tries her best with mixed results. One night she is heckled by Bob (Brian Markinson), an older gentleman who doesn’t like what he is seeing. Blowing it off as just another heckler, Charlene finds herself running into him again. She soon learns that Bob used to be a successful comic, and the two of them form an unlikely friendship, and he helps her realize what it means to be a good comedian.

It makes complete sense that this world would produce some great stories because that is what the job is all about. While this movie is about stand-up comedy, there is a real human drama at its core. The whole goal of a comedian is to make people laugh, but oftentimes those are the people hurting the most. What we learn about Charlene and Bob throughout the film make their comedy more intriguing and also that much more tragic.

What makes this movie really shine is the relationship at the core of the film. Charlene and Bob form a very sweet and beautiful friendship, akin to a father/daughter relationship. Things start out as a battle of wits between the two before realizing that they can help each other. It’s a beautiful thing, and it’s completely sold by Harwood and Markinson, who give wonderful performances.

Directed by Shannon Kohli and written by James Pickering, All Jokes Aside is an unflinching and inspirational look into the comedy world. It tackles subjects I wasn’t expecting it to, and I liked it so much more for it. It’s a solid movie anchored by great acting and a touching story. Definitely give it a watch.

ALL JOKING ASIDE is available now On Demand from Quiver Distribution.