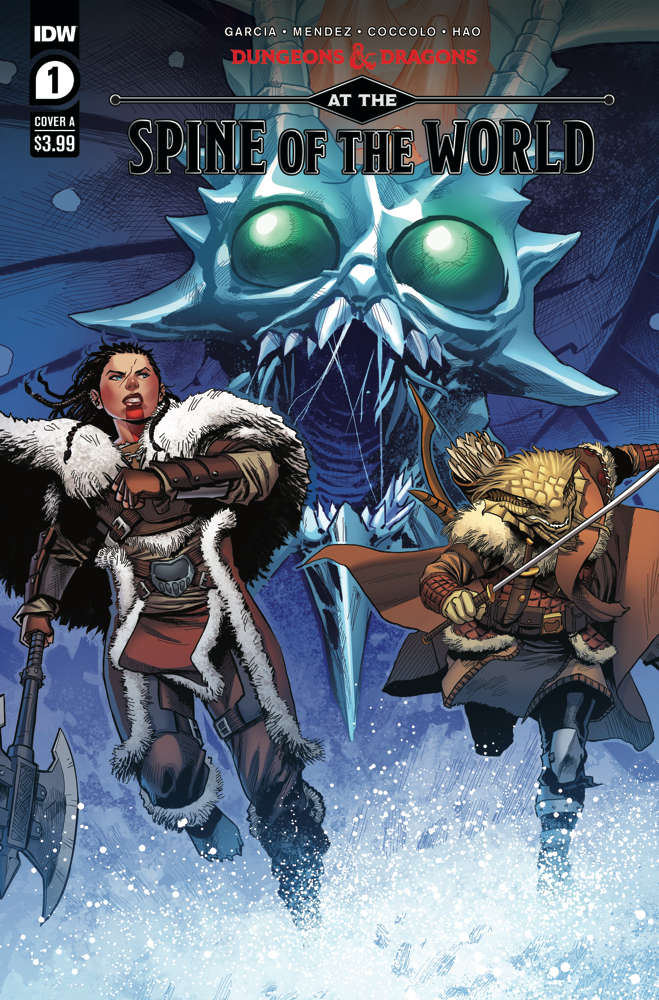 Comic Book Review: Dungeons & Dragons: At the Spine of the World #1

Starting out, we see what looks like a squad of people in a covered wagon being pulled by hounds. Like a true thief, one of them attempts to steal something from the haul only to be caught doing so. An argument breaks out, which inevitably leads to a fight; the wagon cannot withstand the fight and crashes. The hounds run off, leaving the people behind to fight it out in the middle of a snowstorm. An hour passes when the canines come across a female barbarian who they then take back to the crash.

Arriving at the crash site of the covered wagon, she discovers a single human. Moments later, a rumbling is felt, and a giant worm-like beast known as a Remorhaz bursts through the ground, wreaking havoc. After the barbarian puts forth a great fight, the creature feints leaving only to return and then receive three arrows to the face by a Dragonborn Ranger known as Saarvin.

With the beast seemingly dead, Saarvin introduces himself to the barbarian who goes by Runa. She asks Saarvin to take the human survivor, a Warlock who goes by the name of Amos, to a Druid who lives in one of the Ten Towns. Feeling the need to repay Saarvin for saving their life, Runa accompanies the Dragonborn and the Human as they travel to the town known as Bryn Shandar.

The rest of this comic book serves as a “Getting the Group Together” story. Although it’s relatively quick, they don’t waste any time showing us how the party comes together. From what I can tell, this party consists of a Human Barbarian, a human Warlock, a Teifling Sorcerer, a Dragonborn Ranger, and either a Halfling or a Human Druid. They are on a mission to find a magical underground city and use the magic to save all of Ten Towns. Each person has a reason for needing to save the towns. The Druid is already working on growing plants and keeping them alive in these wintery conditions of no sunlight; the Ranger is on a mission to protect the town, the Tieflings mission is to protect the Druid, the barbarian owes the Ranger, and the Warlock owes them all for saving his life. It’s a mosh posh of owing each other and having a mission that is bigger than themselves.

Since I am somewhat familiar with the recent release of the sourcebook of Icewind Dale: Rime of the Frostmaiden, I can only guess that they are utilizing this as a way to boost sales and to create a story using the book itself. I am fairly certain that the writers even started playing a campaign set in Ten Town and then wrote a story about it. I love it when someone uses D&D material to create stories for people to read; I think that is part of the D&D experience. I also liked that they used part of Runa’s character sheet in one of the covers for this comic book. I love it when they include the character sheets for the characters in the books.

This artwork is also very nicely detailed; everything from the weapons to the beard stubble is in great detail. They did a great job with it.

Coming from my own experience, I prefer a journey to be more drawn out. I felt they traveled to the town of Bryn Shandar a little too quickly. This might have been done because they wanted to bring the party together faster; however, I think it would have been nice to see a little more of what they went through. I would have liked to see the book start at the end of Amoses adventure to collect whatever he and his original crew were collecting and see what Runa was doing before being found by the canines. It seemed a little odd that a barbarian was by herself and not part of a small team. Also, the fight with the Remorhaz went by way too quickly for something that big. Mostly out of curiosity, I looked through my copy of the Icewind Dale setting and the internet to find out what the stats were, and from what I have found, this battle should have taken much longer. In a D&D session, it could easily be a mini-boss and take up a good chunk of time. From what I can tell, going off of the single page of character sheet we saw on the cover for Runa, there were about three level two characters, one of them (Amos the Warlock) was pretty much out of combat due to an injury, and the other (Saarvin the Ranger) didn’t show up until near the end of combat. This left a single level two Barbarian (Runa) to fight this beast on her own. The Remorhaz has an AC17 and HP195. The comic only showed us a few attacks successfully striking the creature. I suppose that with critical hits, the attacks could take out ¼ even up to ½ (and that’s being generous) of the HP. However, I don’t believe it would be enough to wound the Huge Monstrosity or even kill it seriously. I would have preferred them to take up most of the comic book showing us the deadly battle with our heroes nearly dying but coming out on top through an out of the box and creative way as experienced D&D players are want to do. This comic book could have easily been split into two separate comics, and I would have been just fine with that. I would have preferred them to leave us with a cliffhanger of what happened to them once they reached the tavern in Bryn Shandar, and this issue of the series be taken up entirely of the battle with the monster. Sometimes when you play D&D, the majority of the session (If not the entire session) will be combat, and that is fine.

All in all, I am happy with the comic book. It feels like they took the best parts of a session, wrote them down, and drew out what happened for us to read and see. They leave us with a glimpse of some dastardly deeds and a glimpse of what will come next time around. I am eager to read the next issue. As a DM, this has helped me with storytelling, and I think I will be able to use what I’ve learned in my own games. If you play D&D, I would recommend you share this with your fellow players and DMs so you can get more of your fill of D&D content when you aren’t able to play. After all, more D&D is not a bad thing, especially for those with writer’s block.